Djokovic reaches 3rd round at Wimbledon in straight sets 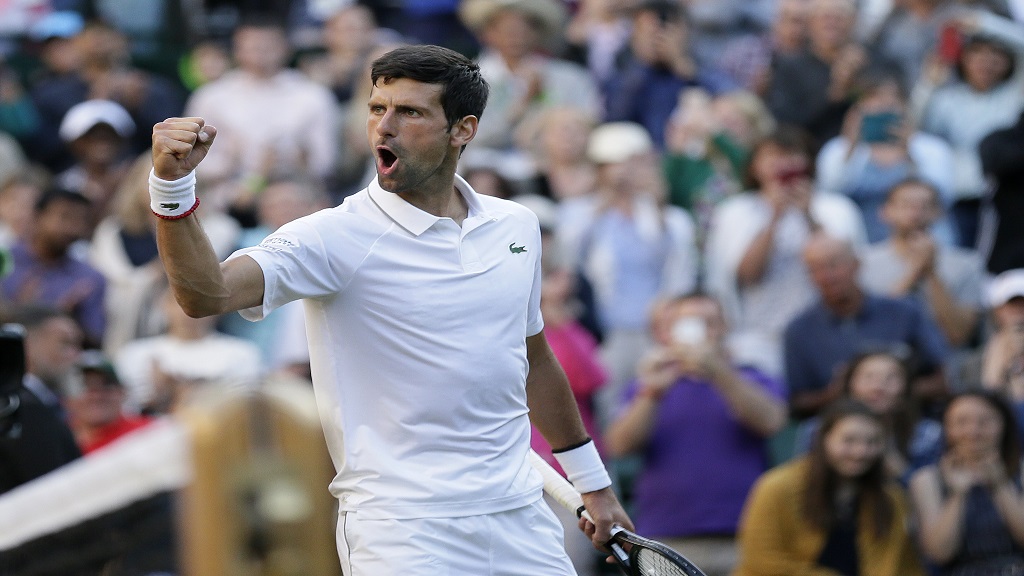 The defending champion did a bit of both on Centre Court at Wimbledon on Wednesday, beating Denis Kudla of the United States 6-3, 6-2, 6-2 in the second round.

Despite the straightforward score, however, Djokovic was short of perfection as he moves toward a fifth title at the All England Club. His serve was broken twice, once in each of the first two sets.

"There were some moments in the match where maybe I could have done better," the top-seeded Serb said. "Dropped a couple of times my serve."

The service hiccups didn't really matter, though, because Djokovic made up for it by breaking Kudla multiple times in each set — seven in total.

Djokovic will next face Hubert Hurkacz on Friday, and then could face 18-year-old Canadian Felix Auger-Aliassime on Monday if they both reach the fourth round. Auger-Aliassime, who on Monday became the first male player born in the 2000s to win a Grand Slam match, defeated Corentin Moutet of France 6-3, 4-6, 6-4, 6-2.

In a Wimbledon tournament filled with upsets, Reilly Opelka pulled off another one earlier Wednesday.

"At first I had a lot of success serving and volleying, so I kept with that," Opelka said. "And then as he kind of picked up on what I was doing and started reading my serve a little bit, it was more difficult for me to win points at the net. So I had to play, played a lot of tennis on the baseline today."

Opelka is making his debut at Wimbledon, and playing in only his fourth Grand Slam tournament. He had never before reached the third round at any major. Wawrinka, who has won each of the other three major titles but has never been past the quarterfinals at the All England Club, also lost in the second round at Wimbledon last year.

On Monday, both No. 6 Alexander Zverev and No. 7 Stefanos Tsitsipas were eliminated. No. 5 Dominic Thiem, a French Open finalist the past two years, followed them out of the tournament on Tuesday.

The 21-year-old Opelka, who is unseeded, finished the match against Wawrinka with 23 aces, with several serves topping 140 mph. One, at 142 mph, tied with Zverev for the fastest of the tournament so far.

"I had some chance," Wawrinka said. "I start a little bit slow. I was a bit hesitating, not really moving well enough. ... At the end he went for it. He went bigger than me and he deserved to win."

Two-time major champion Victoria Azarenka, third-seeded Karolina Pliskova and eighth-seeded Elina Svitolina all advanced in the women's draw, but only two of them had an easy time getting to the third round.

Svitolina, on the other hand, was two points from losing to Margarita Gasparyan in the second set but eventually won when her opponent retired with an injury at 5-7, 6-5.

Gasparyan was serving at 5-5, 0-15 in the second set when she was injured. She clutched her right thigh after a serve and eventually dropped to the court, lying along the baseline. A trainer attended to Gasparyan, and Svitolina came over to check on her opponent, bringing her a bottle of water.

"I know when there is cramps you need to drink lots of water. Your muscles are contracting. So it's important just to drink lots of fluids," Svitolina said. "So that's why I gave her some water, because no one really did anything. I mean, we were trying to help, but, yeah, it's tough to react straightaway."

When play resumed, Svitolina broke to lead 6-5 and served for the second set, but Gasparyan retired from the match while trailing 40-15 in that game.

Later, American teenager Coco Gauff was playing Magdalena Rybarikova on No. 1 Court at the All England Club.

The 15-year-old American's second-round match was moved to No. 1 Court, a stadium with a roof and lights, because last year's runner-up Kevin Anderson didn't complete his victory over Janko Tipsarevic on No. 2 Court until almost 8 p.m.

Gauff beat five-time champion Venus Williams in the first round.