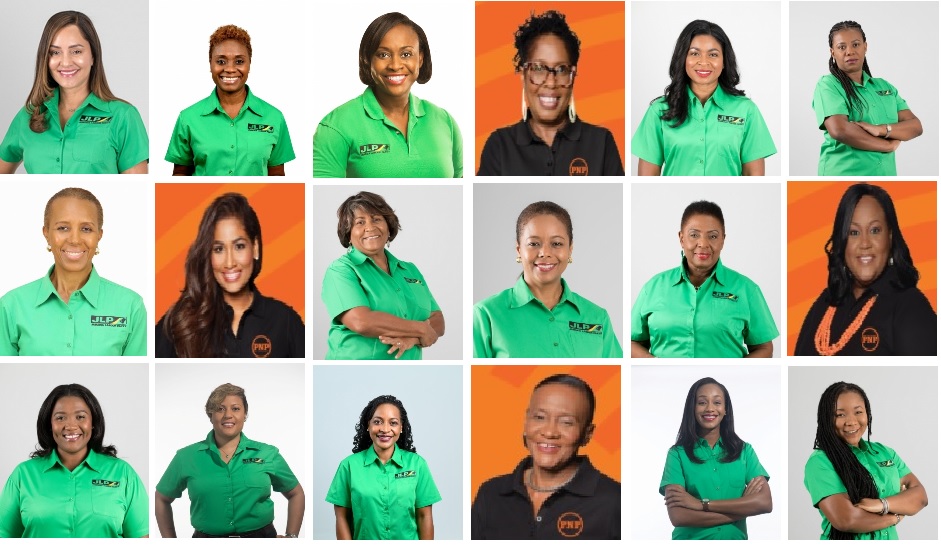 The photos of the record 18 women who will be seated in the House of Representatives when Parliament reconvenes.

A record number of women will be entering Gordon House when the parliament reconvenes after Thursday’s general elections which saw the Jamaica Labour Party (JLP) registering a massive 49-14 seat win over the People’s National Party (PNP).

At least 18 women will shortly be entering the parliament building at Duke Street in Kingston and 14 of them, including several newcomers will be on the government benches. Four, who are all returning, will be on the Opposition benches.

For the JLP, the veteran Olivia ‘Babsy’ Grange retained her Central St Catherine fortress, so too Marissa Dalrymple-Phillibert in South Trelawny. She will have company in Trelawny as newcomer Tova Hamilton sent the PNP’s Victor Wright packing. Fayval Williams, who served as the Minister of Science, Energy and Technology in the last administration, retained her East St Andrew seat with a much bigger margin to secure a second term. Juliet Holness, the wife of Prime Minister Andrew Holness also secured a second term in neighbouring East Rural St Andrew and her namesake, the Olympian Juliet Cuthbert-Flynn is back as the Member of Parliament-elect for West Rural St Andrew after dismissing the challenge of Krystal Tomlinson.

Ann-Marie Vaz will remain in Portland with her husband Daryl Vaz who is the MP for West Portland. This is after she easily retained the East Portland constituency which she won by just over 300 votes in April 2019. Her majority is now much bigger. Western Hanover will have a new MP in Tamika Davis who booted the PNP’s Ian Hayles from the seat. In West Central St James, Marlene Malahoo Forte easily won a second term and in the process showed her challenger, Dr Andre Haughton, that the opinion polls were right.

The last time Eastern St Thomas had a JLP representative, Pearnel Charles Sr was in charge. He was beaten in 1993 by Dr Fenton Ferguson but his daughter, Dr Michele Charles toppled the dental surgeon on Thursday, avenging both her father’s and sister Patrece Charles-Freeman’s defeat at the hands of Ferguson.

By winning the battleground constituency of North East St Catherine, Kerensia Morrison proved that talk by Oswest Senior-Smith - who spent more than two years in the constituency - that he was poised to take the seat was mere fantasy. Having been parachuted in at the last minute as replacement for Leslie Campbell, Morrison had less than two months to campaign but her margin of victory suggested it was no contest.

For her part, Marsha Smith completed the formalities of winning the North East St Ann seat, the JLP stronghold that became vacant with the death of Shahine Robinson in May. In North West St Ann, Krystal Lee wrested the seat from Dr Dayton Campbell of the PNP while her fellow labourite, Rhoda Crawford, sent shockwaves inside the Opposition party when she toppled Central Manchester MP Peter Bunting, the biggest casualty for the PNP on a night that saw many bigwigs swept from office.

For the PNP, Dr Angela Brown-Burke in South West St Andrew, Denise Daley in Eastern St Catherine and Natalie Neita in North Central St Catherine all withstood the JLP onslaught by successfully defending solid PNP seats. But, while she also won her seat, Lisa Hanna came to within a handful of votes of losing what is regarded as the impenetrable fortress of South East St Ann. Having retained her seat, Hanna will now be given significantly more responsibilities and will likely be seriously considered for a most senior leadership role.

WATCH: Did Horace Dalley sense what was coming?