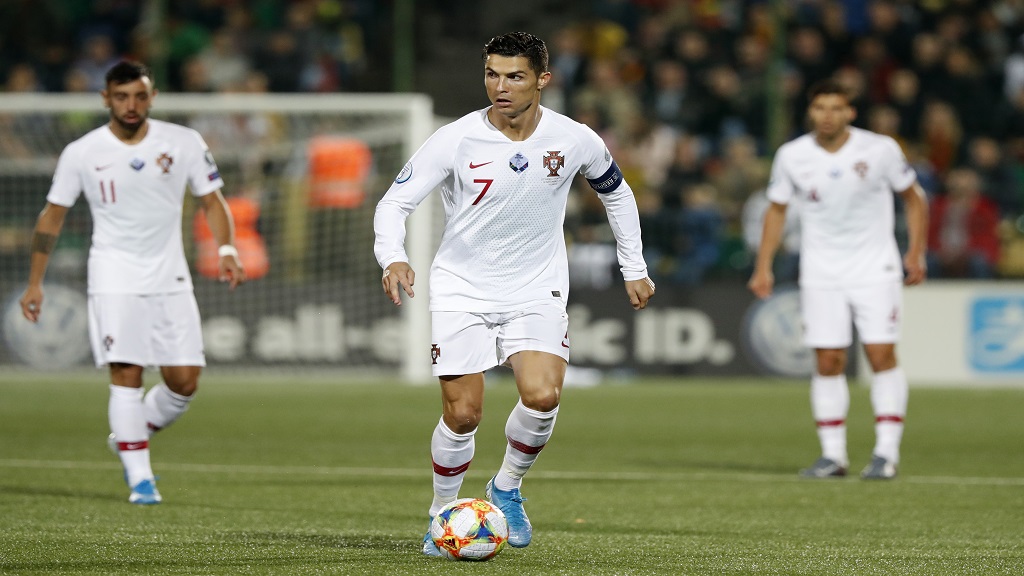 England's scoring form was on display again in European Championships qualifying on Tuesday. So was Cristiano Ronaldo's.

England made it four wins out of four in Group A with a 5-3 win over Kosovo and Ronaldo netted four goals in European champion Portugal's 5-1 away win at Lithuania.

On a night of heavy scoring, it took the five-time Golden Ball winner's international tally to a whopping 93. Ronaldo might well hit the century mark before next year's tournament, considering Portugal still face Lithuania at home and twice play lowly Luxembourg.

"I'm going through a good phase, but the team has been playing well too," Ronaldo said. "I'm enjoying this moment not only because of my goals, but also because of the team's performances in recent years. I just have to keep helping the team."

Striker Harry Kane moved onto a more modest 26 for England, whose fans got a jolt when midfielder Valon Berisha put the visiting side ahead after just 35 seconds.

They were soon reassured by Raheem Sterling's equaliser and Kane's latest goal for England, both inside the opening 20 minutes at St. Mary's Stadium in Southampton on a rare occasion England wasn't playing at Wembley Stadium.

By halftime fans had been treated to five home goals, including 19-year-old winger Jadon Sancho scoring his first two for England.

But the second half proved more inspiring for Kosovo's fans as they witnessed a mini-comeback, with Berisha enjoying a memorable night with a fine second goal curled into the top corner. Kane could have netted a brace, too, but saw his penalty saved by Arijanet Muric.

World Cup winner France laboured at times against a well-organized Andorra side in a 3-0 home win, with Barcelona forward Antoine Griezmann missing a penalty for the second straight qualifier.

After Kingsley Coman found a way through in the first half, center half Clément Lenglet and substitute Wissam Ben Yedder added goals after the break.

England's attack is purring with 19 goals in four games, but alarming questions will be asked of the defense.

From a commanding position of 5-1 up, England leaked two goals after the break — one of those a penalty conceded by the expensively-acquired Manchester United center back Harry Maguire.

Kosovo's opening goal was the result of a careless pass from defender Michael Keane.

England still haven't lost a qualifier for either the World Cup or European Championship in 10 years. But coach Gareth Southgate knows his defense has to eradicate such sloppy errors if his side wants to win Euro 2020.

"The outstanding play was obvious," Southgate said, "and the errors were obvious."

The Czech Republic overtook Kosovo to move into second place in Group A with nine points after a 3-0 win at Montenegro and hosts England on Oct. 11.

Ronaldo scored from the penalty spot in the seventh minute, before Lithuania hit back through Vytautas Andriuskevicius' header.

Portugal's second goal was given to Ronaldo before being changed to an own goal, and then given back to him on UEFA's website. The bizarre-looking 62nd-minute effort was a low shot from outside the area. It was saved by Lithuania goalkeeper Ernestas Setkus, before the ball bounced off the goalkeeper's back and went in.

Three minutes later, Ronaldo tapped in from Bernardo Silva's pass, and the attacking midfielder set him up again in the 76th.

Portugal are second in Group B with eight points and five behind Ukraine, which have 13 points having played one game more.

Griezmann remains stuck on 29 international goals after hitting his spot kick too close to goalkeeper Josep Gomes in a one-sided first half where France largely struggled to turn possession into chances.

Coman pounced in the 18th after latching onto Jonathan Ikone's pass behind the defense for his third goal in two France games.

Griezmann's curling free kick from the left was headed in by Clément Lenglet soon after the break.

Substitute Wissam Ben Yedder added the third during injury time, steering the ball in from close range after Nabil Fekir's free kick was spilled by Gomes.

Turkey and France top Group H with 15 points and meet at Stade de France on Oct. 14.

Third-place Iceland slipped three points behind the top two after losing 4-2 away to Albania.

Andorra has scored no goals and conceded 14 in six defeats.

Messi beats Ronaldo to UEFA Goal of the Season award