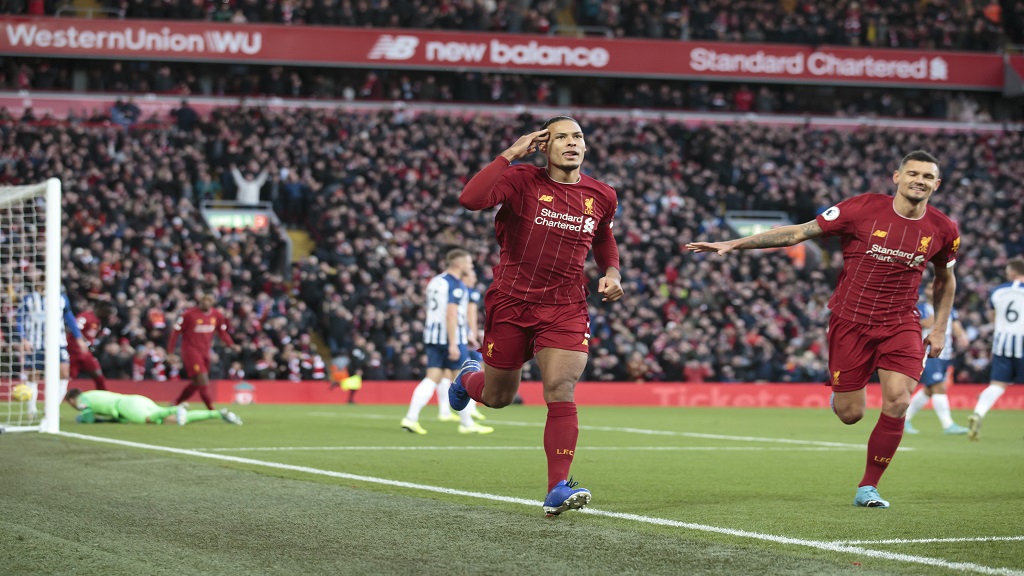 Liverpool remain on course for a first ever English Premier League (EPL) title after a nervy 2-1 win over Brighton and Hove Albion, while Manchester City could only manage a 2-2 draw at Newcastle United.

Jurgen Klopp's side endured a tense finish at Anfield after goalkeeper Alisson was dismissed with 14 minutes remaining, but they held on for a 13th win in 14 games this season.

City, meanwhile, were far from their fluid best at St James' Park and were denied a vital win by Jonjo Shelvey's superb late strike.

Jose Mourinho racked up a second consecutive Premier League win since taking over at Tottenham, Dele Alli proving to be the star man in a 3-2 win over Bournemouth, while West Ham pulled off a surprise 1-0 victory over Chelsea at Stamford Bridge.

Runaway leaders Liverpool survived a nervy finale to equal their longest unbeaten run in the top flight and capitalise on City's slip-up.

A Trent Alexander-Arnold free-kick set up the opener for Van Dijk in the 18th minute and the same combination soon provided a second goal as Brighton were found wanting at a corner.

Brighton were given an unexpected lifeline when Alisson was sent off for handling outside his box – meaning he will miss Wednesday's derby clash with Everton – and Lewis Dunk caught out replacement goalkeeper Adrian with a quick free-kick.

The Seagulls could not find a late equaliser, though, and while Leicester City can cut Liverpool's advantage at the summit to eight points by beating Everton on Sunday, there looks to be no stopping a team who have now gone 31 league games unbeaten, matching their record streak from May 1987 to March 1988.

Pep Guardiola's side looked set to cruise to all three points when Raheem Sterling scored his eighth Premier League goal of the campaign midway through the first half, but they were pegged back by Jetro Willems' fierce drive three minutes later.

Kevin De Bruyne restored City's lead with a sumptuous half-volley in the 82nd minute, the Belgium international using his chest to control a headed clearance before unleashing a stunning effort that crashed in off the underside of the crossbar.

Newcastle bounced back in style to ensure a share of the spoils two minutes from time, though, when Shelvey whipped home from 25 yards after Christian Atsu had picked him out with a short free-kick.

Tottenham beat West Ham and Olympiacos in Mourinho's first two matches and were good value for their latest triumph at Tottenham Hotspur Stadium, despite another late collapse.

The hosts made a slow start but took the lead midway through the opening period through Alli, who slotted the ball underneath Aaron Ramsdale after being teed up by Son Heung-min's first-time pass.

The England international scored a second early in the second half before Moussa Sissoko added a third with his first league goal in his past 69 appearances.

Harry Wilson pulled two goals back for Bournemouth in the closing stages - one of which was a superb free-kick - but Tottenham held on for back-to-back league wins for the first time since April to climb to fifth, six points off a Champions League place.

Aaron Cresswell scored the only goal of the game as West Ham eased the pressure on Manuel Pellegrini and ended their seven-game Premier League winless streak at Chelsea.

The Hammers became only the second side to win at Chelsea in the league this season and Frank Lampard's side, who lost at Manchester City a week prior, could have few complaints about the result.

Cresswell scored the winner early in the second half and West Ham could have extended their lead before surviving a late rally from the hosts to secure their first victory since they beat Manchester United on September 22.

Pulisic keeps up scoring run for Chelsea in win over Palace