EPL ROUND UP: Tottenham whip Stoke 5-1; Burnley back to winning ways 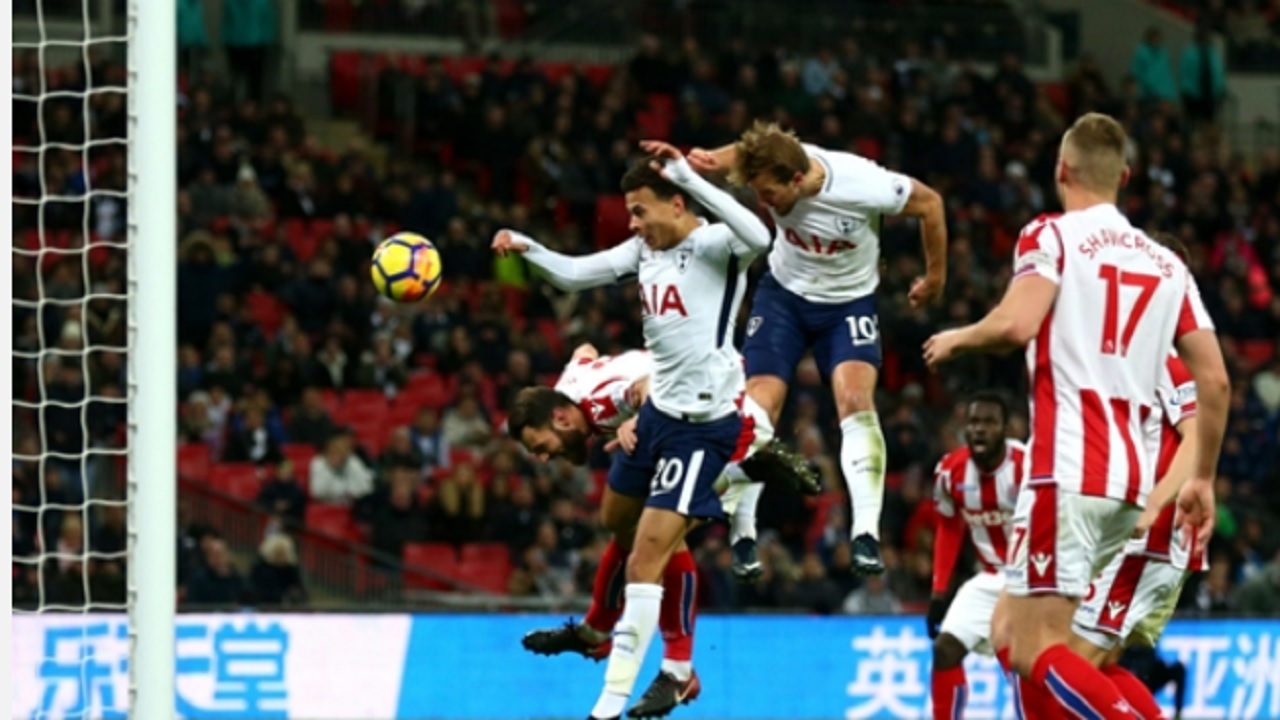 Harry Kane helped himself to a second-half brace in a 5-1 rout as Stoke City collapsed to a familiar thrashing at the hands of Tottenham in the English Premier League on Saturday.

The past three matches between the sides had finished 4-0 in favour of Spurs and Mauricio Pochettino could not have wished for more accommodating opponents as his team won for the first time in five Premier League matches.

Ryan Shawcross' unfortunate own goal – the Stoke captain's sixth in the top flight – punctuated an uneventful first half but the wheels came off in worrying fashion for City boss Mark Hughes after the interval.

Kane had already passed up a pair of glorious chances by the time the excellent Son Heung-min made it 2-0 and the England striker's double made it three goals in the space of 12 second-half minutes.

Christian Eriksen got in on the act as Stoke's defence unravelled terribly, with Shawcross heading into the intended net 10 minutes from the end offering meagre consolation.

Spurs are up to fifth, above Arsenal and Burnley on goal difference, while Stoke and their battered goal difference sit precariously three points above the relegation zone.

The game was low on goalmouth action during the opening stages and there was a significant slice of fortune when Tottenham hit the front after 21 minutes.

Son had provided most of Spurs' attacking spark by that stage and the South Korea international made his latest dart for the byline down the left flank and whipped in a low cross.

His delivery flicked up off Kurt Zouma and Shawcross could do little as the ball struck him in the chest and zipped past goalkeeper Jack Butland.

Wembley was waiting for the net to bulge when Son threaded a pass through to Kane, played on-side by Stoke youngster Tom Edwards, but the striker uncharacteristically slotted wide.

Unperturbed by his earlier setback, Shawcross got in the way at close quarters to deny Kane with a pair of blocks two minutes before half-time.

Kane was still struggling to locate his usual poise early in the second period when Stoke failed to clear a corner and he hacked wildly over from four yards.

It fell to Son to show him how it was done in the 53rd minute, scampering on to Dele Alli's throughball and smashing past Butland after Harry Winks' flicked pass on the turn launched a Tottenham counter-attack.

Stoke were rattled and Butland scrambled behind having ceded possession to Kane before the Spurs striker finally got on the scoresheet 90 seconds after Son's goal.

Ben Davies was given far too much space to hang up an inviting cross to the back post, where Tottenham's top scorer leapt to power home.

There was a rare moment of encouragement for Stoke when Xherdan Shaqiri burst into the Tottenham box and forced a stunning reaction save from Hugo Lloris – Eric Dier turning the rebound just the right side of his own post.

Lloris' opposite number Butland was increasingly exposed and Edwards was found wanting when Son stole in front of him and laid off for Kane to sweep home with a sense of inevitability.

Erik Lamela then replaced Alli for his first Tottenham home game on the other side of his 13-month injury ordeal and Wembley was willing the ball into the net when he lunged in to try beat Butland from close range.

Hughes is unlikely to be the recipient of similar goodwill back in Stoke after this latest thumping, compounded when Eriksen breezed beyond a vacant backline to gleefully accept Son's fine 74th-minute pass, even allowing for the quirk of Shawcross bookending the scoring.

There was still time for Butland to wonderfully deny Eriksen, leading to the uncomfortable conclusion that Stoke's best player in a 5-1 hammering had been their goalkeeper.

OVER AT THE LIBERTY STADIUM: Wilfried Bony scored an 81st-minute winner as Swansea City moved off the bottom of the Premier League with a 1-0 victory over fellow strugglers West Brom.

The Swans left it late to record their first league victory in eight matches, Bony ramming home a loose ball following a Ki Sung-yueng corner to lift his side above Crystal Palace in the standings.

The striker's second goal in as many games leaves visiting manager Alan Pardew still winless since taking charge of the Baggies, who only remain outside the relegation places on goal difference.

Pardew's last trip to the Liberty Stadium was back in November 2016, when his Crystal Palace side lost 5-4 to their hosts, yet any hope of a pre-Christmas feast of goals looked unlikely between two clubs with a combined total of 20 in the league prior to kick-off.

It appeared the battle between the two strugglers would end in stalemate until Bony popped up with an emphatic finish, securing three crucial points that will ease any pressure on his manager, Paul Clement. 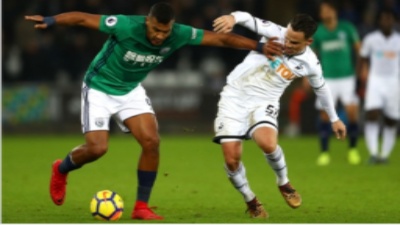 OVER AT TURF MOOR. Burnley strengthened their grip on seventh place as Scott Arfield marked his first Premier League start since October with a goal in a 1-0 victory over 10-man Watford.

Restored to Burnley's line-up in place of the injured Robbie Brady, Arfield proved his worth with a neat finish on the stroke of half-time - moments after Marvin Zeegelaar had seen red for a reckless challenge on Steven Defour.

Marco Silva's side has enjoyed its trips away from Vicarage Road this term, and though the Hornets looked to get on the front foot, Burnley put in a typically rugged display at a snow-swept Turf Moor.

Indeed, despite Watford's renewed vigour at the start of the second half, it was Burnley who looked more likely to extend their lead - Chris Wood seeing a goal correctly disallowed.

Substitute Ashley Barnes thought he had put Burnley two up with 20 minutes remaining, only for Lee Probert, after a lengthy discussion with his assistant, to controversially rule it out for offside.

Fortunately for Burnley, that decision mattered little as Sean Dyche's side - which was beaten at Leicester City last time out - held firm to move six points clear of Watford and level with sixth-placed Arsenal. 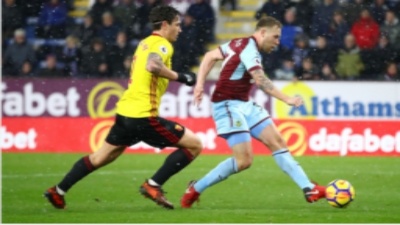 OVER AT SELHURST PARK: Asmir Begovic saved a stoppage-time Christian Benteke penalty as Bournemouth clung onto a 2-2 draw at Crystal Palace and consigned the luckless Eagles back to the foot of the Premier League.

Roy Hodgson has overseen a general improvement in Palace since replacing Frank de Boer and they were the better team in this contest, but were undone by a piece of Machiavellian set-piece work, a moment of Jermain Defoe inspiration and Benteke's late loss of composure.

Bournemouth took the lead contentiously when Defoe scored the 200th league goal of his career, but only after Jeff Schlupp appeared to have been fouled.

Palace deservedly equalised from the spot through Luka Milivojevic after the superb Wilfried Zaha was fouled before taking the lead swiftly after with a Scott Dann strike, which came with a sliver of Premier League history.

But Defoe levelled the scores with a spectacular hit from a near impossible angle as Palace were made to lament a string of missed chances in each half.

Zaha won another spot-kick in time added on, but Benteke's weak effort was comfortably saved, as he remains without a goal this season, and Swansea City's win over West Brom leave Palace looking upwards from the bottom once again.

Conte: Chelsea out of title race after defeat at West Ham