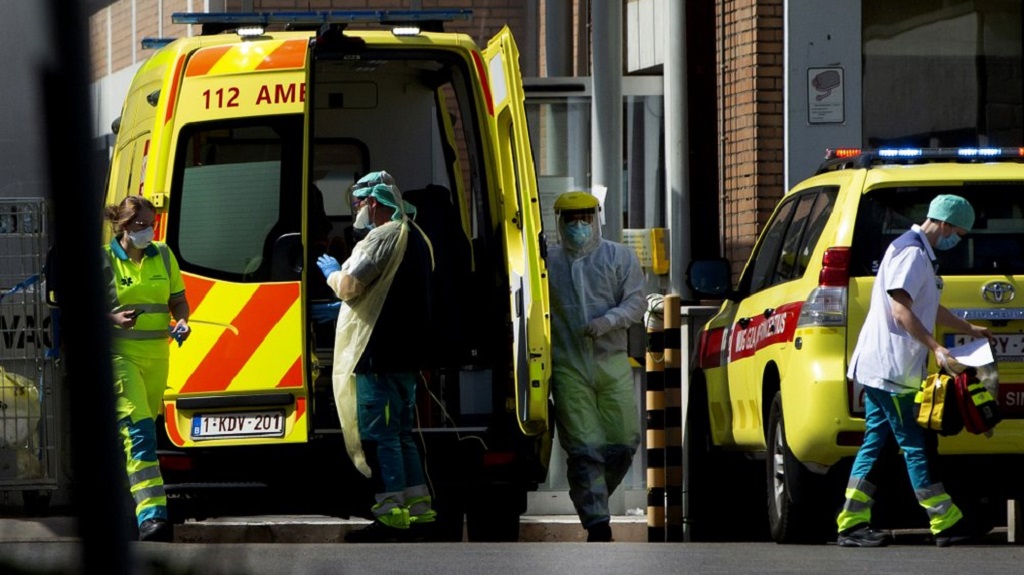 FILE - In this Monday, April 13, 2020 file photo, medical personnel in protective gear prepare to receive a patient at a hospital in Antwerp, Belgium. This week news struck that the European Center for Disease Control has put Belgium at the largest number of COVID-19 cases per 100,000 citizens, surpassing the Czech Republic, it is revealed Tuesday Oct. 27, 2020. (AP Photo/Virginia Mayo, File)

As European Union countries weigh tougher coronavirus restrictions, including possible new lockdowns, a top EU official on Wednesday urged the 27 member states to introduce common rules to test for the disease and track its spread to help prevent further damage to their economies.

European Council President Charles Michel, who will chair an extraordinary summit of EU leaders on Thursday evening focused on the pandemic, also urged them to prepare for logistical challenges likely to plague the rollout of any vaccines, which he said could come by early next year.

Well over six million people have contracted the virus in the EU member countries plus Britain, Iceland, Liechtenstein, Norway and Switzerland, according to the European Centre for Disease Prevention and Control.

France's president was to address the nation Wednesday as the country braces for a possible lockdown to prevent hospitals being overwhelmed, as Belgium, which has Europe's highest infection rate, considers a similar move. Germany's chancellor is pressing for a partial confinement.

"We are in a storm. We are all in the same boat. And in this storm, we must keep cool heads," Michel told French radio RTL.

The world's biggest trading bloc relies on free movement between its member states and the mutual recognition of each other's standards and laws to keep the economy alive. Michel said nations must coordinate their approval of new coronavirus tests and of tracing systems aimed at halting its spread.

He said he hoped that EU leaders "understand that if they each put in place their own national testing strategy without coordinating at a European level, without mutual recognition, then we will find ourselves back in the battles of the past."

As the pandemic spread through Europe in late February-March, countries bickered over access to face masks and medical equipment, while border restrictions introduced without consultation caused major traffic jams, slowing the distribution of medicines and material.

"In the end, all Europeans lose out," Michel said.

A high-ranking official in the Spanish foreign ministry said Wednesday that several European countries, including Spain, are pushing for a system of mandatory tests ahead of travelling within the region as a way to avoid any new border closures inside Europe's ID-check free travel area.

The program, if approved, would also involve random tests on arrivals.

With the best hope for ending restrictions lying in the discovery of an effective vaccine, Michel urged the leaders to prepare for prioritizing vaccinations as not everyone can be vaccinated at once, and some vaccines might be single dose, while others could require two doses or more.

"Based on the information we have, at the end of the year or early next year 3 or 4 vaccine candidates could be available," Michel said.

Coronavirus cases in the Caribbean to date: 280,953

With hope high for vaccine, Britain prepares to roll it out