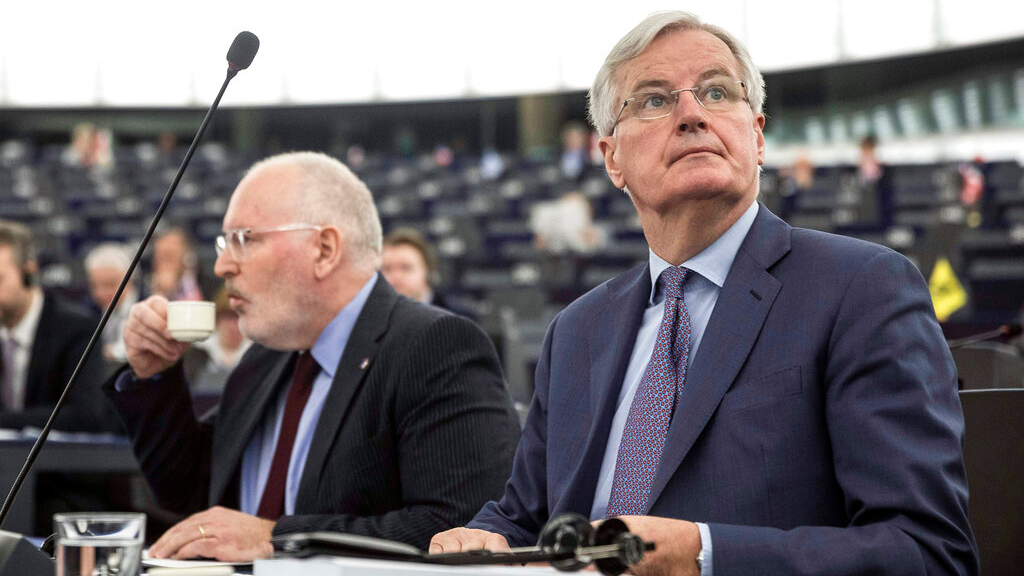 Britain and the European Union braced Wednesday for a chaotic, cliff-edge Brexit after U.K. lawmakers rejected the two sides' agreed divorce deal. Britain's Parliament was set to hold votes aiming to try to rule out that disruptive option, or at least postpone it for now.

But top EU officials warned that the prospect could not be eliminated unless the U.K. Parliament approved an exit deal.

"The risk of a no-deal has never been higher," chief EU negotiator Michel Barnier said.

"I urge you please not to underestimate the risk or its consequences," he told European lawmakers in Strasbourg, France.

Both Britain and the EU ramped up planning for a "no-deal" Brexit, which would rip up decades of rules for travel and trade between Britain and the EU. Economists say it could cause huge upheaval, with customs checks causing gridlock at U.K. ports, new tariffs triggering sudden price hikes and red tape for everyone from truckers to tourists.

The U.K. government announced its plans for the Irish borders, saying it wouldn't impose new checks, duties or controls on goods coming from EU member Ireland into Northern Ireland.

It also said it wouldn't impose tariffs on most goods coming from the EU — though there would be new levies on imports of meat and cars.

The government said 87 percent of imports by value would be tariff-free, a "modest liberalization" compared with current trade rules. A mixture of tariffs and quotas would apply to beef, lamb, pork, poultry and some dairy "to support farmers and producers who have historically been protected through high EU tariffs."

The tariffs, intended to be temporary, wouldn't apply to goods crossing from Ireland to Northern Ireland, raising fears the plan would fuel smuggling across the border.

U.K. Brexit Secretary Stephen Barclay told the BBC that the government was well prepared, but "no-deal is going to be very disruptive for the economy."

Carolyn Fairbairn, director-general of the Confederation of British Industry, said the no-deal arrangements would be "a sledgehammer for our economy."

British lawmakers rejected May's Brexit deal for a second time on Tuesday, throwing it out by a 391-242 vote.

With Brexit now just 16 days away, Parliament will vote Wednesday on whether to rule out leaving on that date without a deal.

A weakened May, her authority shredded by successive defeats, said her Conservative lawmakers would get a free vote, rather than having to follow a party line.

If no-deal is ruled out, Parliament will vote Thursday on whether to ask the EU to delay Britain's departure.

"The government needs to seek an extension of (Brexit-triggering) Article 50 so that we can have a bit more time to sort things out because, to be honest, we are in such a mess," opposition Labour Party lawmaker Yvette Cooper said.

The EU — openly exasperated by the continuing Brexit crisis in Britain — was speeding up its preparations for a disorderly British departure, and ramping up criticism of the political disarray in London.

Barnier said that "again the House of Commons says what it does not want. Now this impasse can only be solved in the U.K."

The EU parliament's Brexit group was meeting to assess the situation in Strasbourg, France before a plenary debate on the impasse.

EU Economic Commissioner Pierre Moscovici said Tuesday's vote increases chances of a British departure that is "disorderly, brutal, like a cliff," including sudden new customs rules and trade chaos that multinationals have warned about for months.

EU member states were equally scathing, led be Germany, the economic powerhouse of the 28-nation EU.

German Foreign Minister Heiko Maas said that "whoever rejects the (Brexit) agreement plays with the welfare of their citizens and the economy in a reckless way."

The U.K. Parliament has now twice rejected the withdrawal agreement that May spent the best part of two years negotiating with the EU, and the bloc insists there will be no more talks.

Moscovici said "the train has passed two times" and the EU will not renegotiate the deal before the scheduled Brexit date of March 29.

The European Parliament was poised to approve measures later Wednesday to deal the best it could with the immediate hardship of a cliff-edge departure at the end of the month.

It was set to back emergency rules to ease the immediate burdens on roads and airports if suddenly lorries would have to be checked and Britain would become a third country.