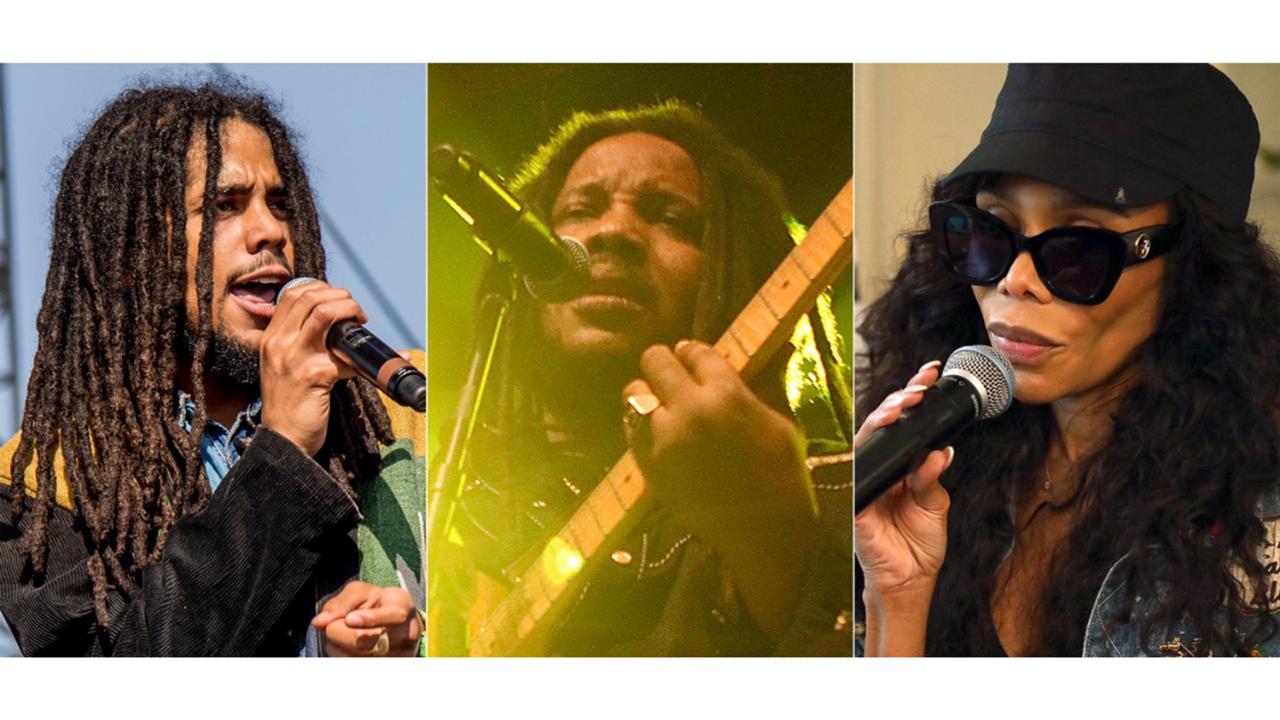 Skip Marley performs at Coachella Music & Arts Festival in Indio, Calif. on April 13, 2018, from left, Stephen Marley performs during the "Catch A Fire Tour 2015" stop in Huntington, N.Y. on Sept. 1, 2015 and Cedella Marley speaks at the Marley Brunch with Marley Family Members in West Hollywood, Calif. on Jan. 24, 2020. The family of reggae legend Bob Marley are covering his song “One Love” to raise money for coronavirus relief efforts. (AP Photo)

Bob Marley’s Grammy-winning children and chart-topping grandson have re-imagined one of his biggest hits to assist children affected by the coronavirus pandemic.

Stephen Marley, Cedella Marley and her son, Skip Marley, have joined forces to produce a new version of “One Love,” which will be released July 17 and will also include special guest appearances from other musicians. A music video will also be released that day.

“Daddy wrote this song like 40 years ago, a long, long time. It just feels like right now in the world we need to have some different type of unity happening. Not just lip service, but real action,” Cedella Marley, 52, said in an interview with The Associated Press this week.

“I think we’re going to bring this song to a generation that needs to know we do care. We do care about what happens. We’re going to do a nudge and push and a shove and hopefully, the message will resonate.”

All proceeds from the new version of “One Love,” released by Tuff Gong International and Amplified Music, will support Reimagine, UNICEF’s global campaign for coronavirus relief efforts focused on helping and aiding children around the world.

“(The) song is very special because of (its) message. It’s a song of equality. One love meaning love for everyone, for all humanity. It doesn’t matter the colour, creed or social status or anything like that. It’s appreciating the human family. ‘One heart, let’s get together and feel all right,’” eight-time Grammy winner Stephen Marley said.

“It’s a very important statement for my family.”

Jewellery brand Pandora says it will match every dollar raised from “One Love,” giving up to $1 million.

Cedella Marley said they recorded the song at her house in Miami and they received Rita Marley’s blessing.

“My mom, she came in and she listened, and she gave us a thumbs up and that seal of approval is priceless.”

Skip Marley, the 24-year-old rising star who has collaborated with Katy Perry and Major Lazer, said recording the song reminded him of his first-ever studio session.

“The first time I was ever in a studio recording, we were recording ‘One Love.’ Actually, you remember, mom?” he said, looking to Cedella Marley.

“Yeah, it’s in my book,” the three-time Grammy winner said, referring to her children's book called “One Love.”

“I remember that was my first time I was able to sing on the mic,” Skip Marley added.

“It’s just bringing me back. It’s just a mommy-son thing.”

Skip Marley recently made history by becoming the first Jamaican artist to top Billboard’s adult R&B songs chart. He achieved the feat with the tune “Slow Down,” featuring R&B superstar H.E.R., and he will release an album in August.

“He put in the hard work,” Cedella Marley said. “He’s very disciplined. He loves what he does. His voice now can reach a different generation than my voice. I think we have to use the vessels that are in front of us, sometimes, to get our message across.”

Cedella Marley said she’s happy to see her son keep the family name active, and it’s important to her to keep her father’s legacy alive.

“It’s something that I actually enjoy. I’ve been doing it since I was like 13. It’s something that I’ve grown to love. I go into each day thinking, ‘How can Daddy’s voice bring about something? How can I make him more relevant today than he was yesterday?’” she said.

“I always come up with some really cool ideas.”

WATCH: They're 'jammin' for Bob Marley 75

One World:Together At Home: All you need to know