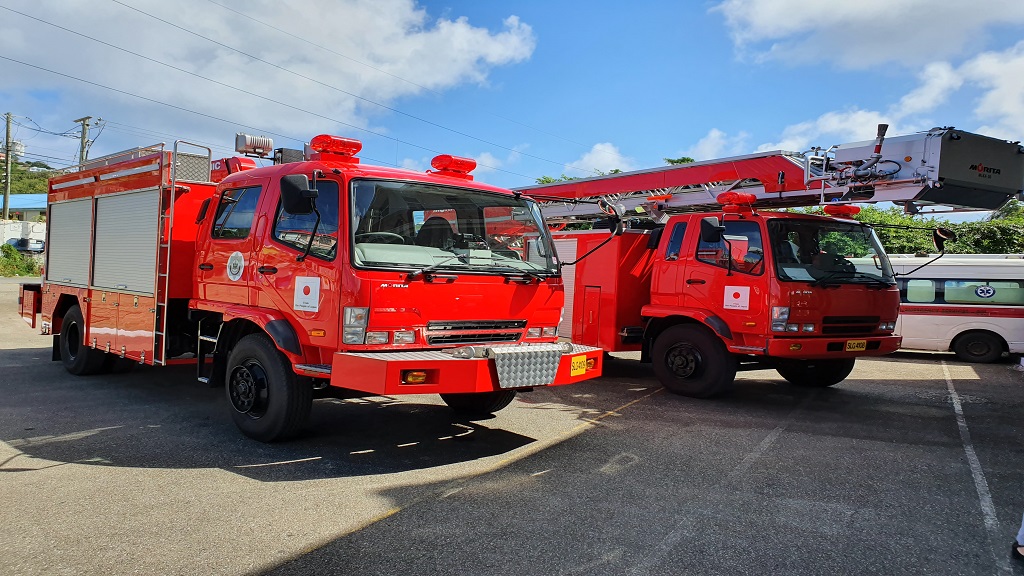 On Friday, January 17, 2020, the SLFA received a donation of a ladder truck and a rescue truck from the Government of Japan.

Home Affairs Minister Senator Hermangild Francis says the donation is timely and much needed by the department, noting government’s efforts in trying to support the fire department to develop and deliver the best service possible to the public.

“The rescue truck is going to give fire officers more leeway when there is a serious accident and if that vehicle veers down some precipice will allow fire officers to recover vehicles which has gone down a precipice and that equipment will be able to put it back on the road. The ladder truck will allow firefighters to tackle fires in high buildings like what we had in Castries recently,” Francis said.

“The high number of fire calls and fires speak for themselves. These fires cause loss of property, dislocation of families and negatively impact family life,” he added.

“We are better placed to provide a more efficient service to the public,” he added.

Gros Islet MP, Lenard Montoute says the donation to his constituency is well appreciated given the rapid development and growth of the Gros Islet constituency. “We have new demands, new requirements on the fire officers in the sense that there are quite a lot more commercial and residential properties to contend with, there are many more people living in the area and security and safety is always an important factor and if the fire officers are to execute their duties as they should professionally and efficiently we have to upgrade their appliances not just for only greater efficiency but also to provide them with better capacity in the sense that now you have to contend with high-rise and bigger buildings,” the MP stated.

“It was a really wonderful experience and I am happy now I can recognize had the fire service had this piece of equipment in the Boulevard, the fire would have been extinguished much quicker,” Francis declared.

According to him, the two fire appliances coast four million Eastern Caribbean Dollars.