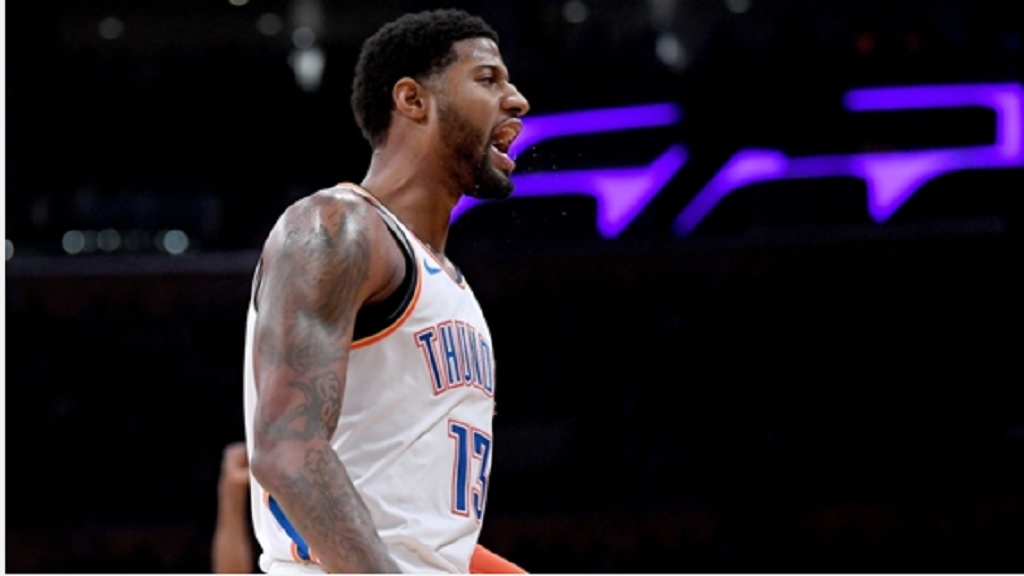 Paul George ignored boos in the Staples Center, scoring 37 points for the Oklahoma City Thunder in a 107-100 victory over the Los Angeles Lakers.

George, who spurned the Lakers in free agency, had plenty of highlights to quieten the crowd on Wednesday.

Thunder star Russell Westbrook had a triple-double (14 points, 16 rebounds and 10 assists), but had a terrible shooting game, hitting just three of 20 attempts.

A few players stepped up in LeBron James' absence, but the Lakers fell short. They are now 1-3 with James sidelined by a groin injury. He is considered day-to-day.

Kyle Kuzma has been the Lakers' second-leading scorer this season, but he left with a lower-back contusion. Kentavious Caldwell-Pope ended up leading the way for Los Angeles, scoring 25 points on six-of-14 shooting. Brandon Ingram and JaVale McGee scored 17 and 15 points respectively.

Anthony Davis had an impressive 34 points and 26 rebounds as New Orleans fell to Brooklyn 126-121.

Jaren Jackson Jr. was very efficient, scoring 26 points on eight-of-11 shooting while grabbing 10 rebounds in the Grizzlies' 101-94 loss to the Pistons.

Joel Embiid had 42 points and 18 rebounds in Philadelphia's 132-127 win against Phoenix.

Justin Holiday scored three points and only made one of his seven shots from the field as the Bulls lost to the Magic 112-84.

Devonte' Graham scored 10 points on three-of-13 shooting in the Hornets' 122-84 routing at the hands of the Mavericks.

Stephen Curry was out of commission in this season's first matchup with Houston. The Rockets are on a tremendous run and James Harden is catching fire every game. Although Chris Paul is out, the Rockets may be able to will themselves to another victory against the reigning champions.

Thunder cruise to win over Rockets, Anthony struggles in return to OKC