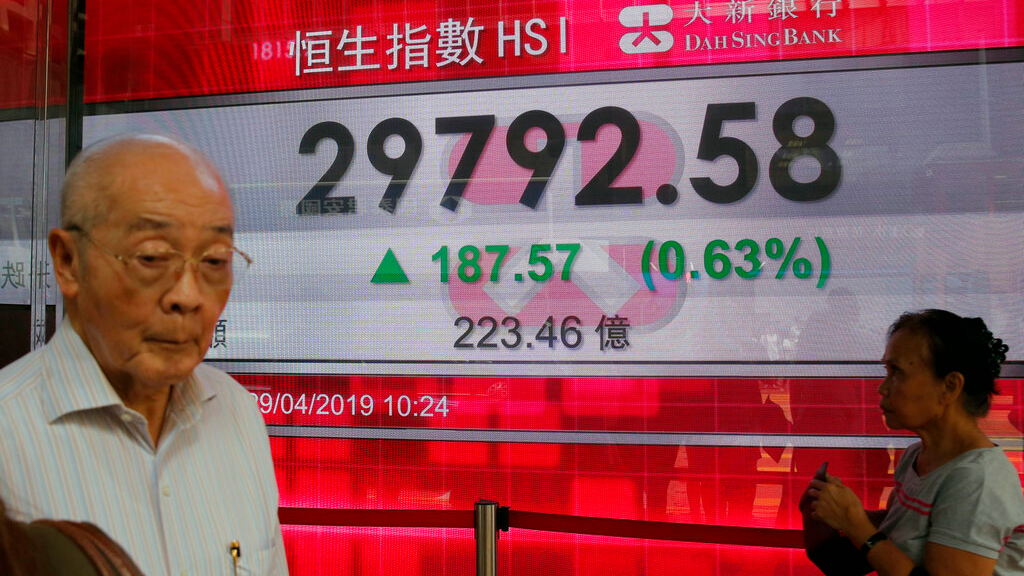 Global stock markets were mostly lower Monday as investors looked ahead to U.S.-Chinese trade talks and the Federal Reserve's update on its U.S. interest rate outlook.

Japanese markets were closed for a holiday and India was closed for elections.

On Wall Street, futures for the S&P 500 and Dow were nearly unchanged after the S&P hit a high on Friday.

U.S. and Chinese officials hold more negotiations this week on ending a bruising tariff war over Beijing's technology ambitions. Both sides say they are making progress, which has helped to defuse anxiety that has battered global financial markets.

The Fed board meets Tuesday and is due to issue a statement the following day on its interest rate outlook.

"Traders will be nervously watching for changes in its dovish outlook," said Jeffrey Halley of OANDA in a report. "My guess is these nerves are misplaced, and the Fed will happily keep its powder dry with the optionality to cut if needed."

Investors are looking ahead to more corporate earnings reports, including Google on Monday, Apple on Tuesday and Volkswagen on Thursday.

Among economic data, Chinese manufacturing surveys this week will be watched for clues on the slowdown in the world's second-largest economy. China's economic growth rate held steady in the latest quarter despite the tariff war with Washington, fueling optimism the country's downturn is bottoming out.

The latest data, along with the Fed report, may give reasons to "maintain optimism" but "there are signs that optimism is stretched," said Vishnu Varathan of Mizuho Bank in a report.

"Especially if China tempers stimulus, the Fed hesitates on further easing and the details of a trade deal reveal trouble spots," he said.

In energy markets, benchmark U.S. crude fell 18 cents to $63.12 per barrel in electronic trading on the New York Mercantile Exchange. The contract plunged $1.91 on Friday to close at $63.30.

Oil prices increased during the first quarter after OPEC and Russia to limit production. More recently, prices have risen after Washington announced it will end waivers from sanctions for countries that import oil from Iran, including China, India, Japan and South Korea.