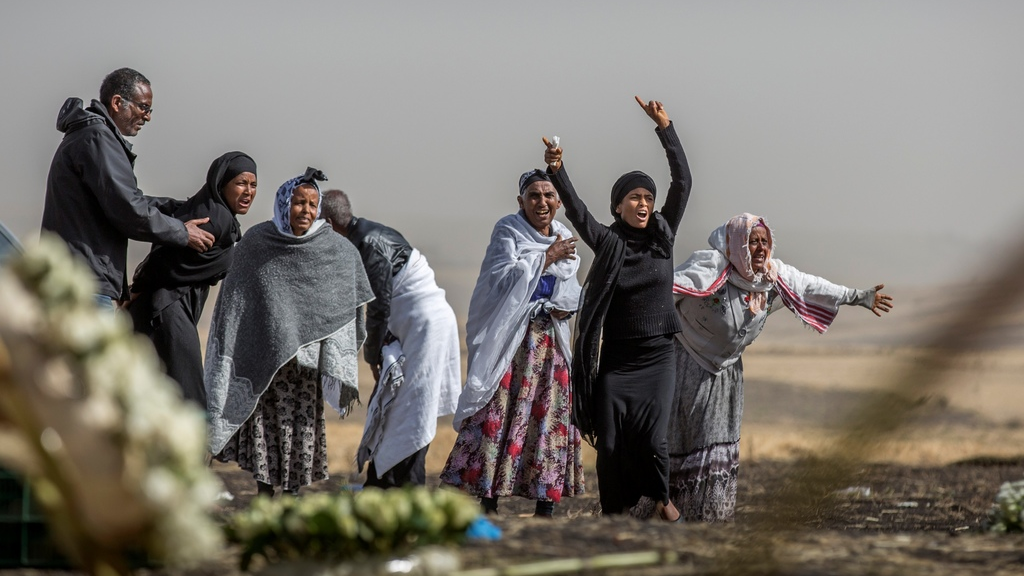 Ethiopian relatives of crash victims grieve at the site where the Ethiopian Airlines Boeing 737 Max 8 crashed shortly after takeoff on Sunday killing all 157 on board, near Bishoftu, south-east of Addis Ababa, in Ethiopia, on Thursday, March 14, 2019. (AP Photo/Mulugeta Ayene)

(AP) Grieving family members of victims of the Ethiopian air disaster are being given sacks of earth to bury in place of the remains of their loved ones.

Officials have begun delivering bags of earth to family members of the 157 victims of the crash instead of the remains of their loved ones because the identification process is going to take such a long time.

Families are being given a one-kilogram (2.2-pound) sack of scorched earth taken from the crash sites, members of two different families told The Associated Press. They spoke on condition of anonymity to avoid any possible government reprisal. An Ethiopian government official who spoke on condition of anonymity because they were not authorised to speak to reporters also confirmed the deliveries of soil.

"The soil came as it became impossible to identify bodies and hand over remains to family members," one family member said. "We will not rest until we are given the real body or body parts of our loved ones."

Forensic DNA work has begun on identifying the remains but it may take six months to identify the victims because the body parts are in small pieces. However, authorities say they will issue death certificates within two weeks. The victims of the crash came from 35 countries.

A mass memorial service for the dead is planned in Addis Ababa to take place Sunday, one week after the crash. Muslim families have already held prayers for the dead and are anxious to have something to bury as soon as possible.

Interpol and Blake Emergency Services, hired by Ethiopian Airlines, will work with Ethiopian police and health officials to identify the bodies, Dagmawit Moges, Ethiopia's Minister of Transport said on Saturday.

"Preparation for the identification process has already started and we will make sure that the post mortem investigation will start as soon as possible," she said.

The US National Transportation Safety Board has sent about 16 members to assist the investigation, she said.

In Paris, investigators started studying the cockpit voice recorder of the crashed Ethiopian Airlines jet Saturday, grieving family members were given sacks of dirt to bury in place of the remains of their loved ones.

The recorders, also known as black boxes, were sent to France because the BEA has extensive expertise in analysing such devices. Experts from the US National Transportation Safety Board and the plane's manufacturer Boeing are among those involved in the investigation.

The Ethiopian disaster and a crash last year in Indonesia were both of the Boeing 737 Max 8 planes. The United States and many other countries have grounded the Max 8s as the US.-based company faces the challenge of proving the jets are safe to fly amid suspicions that faulty sensors and software contributed to the two crashes that killed 346 people in less than six months.

The US Federal Aviation Administration said regulators had new data from satellite-based tracking that showed the movements of Ethiopian Airlines Flight 302 were similar to those of Lion Air Flight 610, which crashed off Indonesia in October, killing 189 people.

Both planes flew with erratic altitude changes that could indicate the pilots struggled to control the aircraft. Shortly after their takeoffs, both crews tried to return to the airports but crashed.

Boeing said it supports the grounding of its planes as a precautionary step while reiterating "full confidence" in their safety. Engineers are making changes to the system designed to prevent an aerodynamic stall if sensors detect that the jet's nose is pointed too high and its speed is too slow.

Investigators looking into the Indonesian crash are examining whether the software automatically pushed the plane's nose down repeatedly and whether the Lion Air pilots knew how to solve that problem. Ethiopian Airlines says its pilots received special training on the software.