Guardiola finds it impossible to keep Aguero and Jesus happy 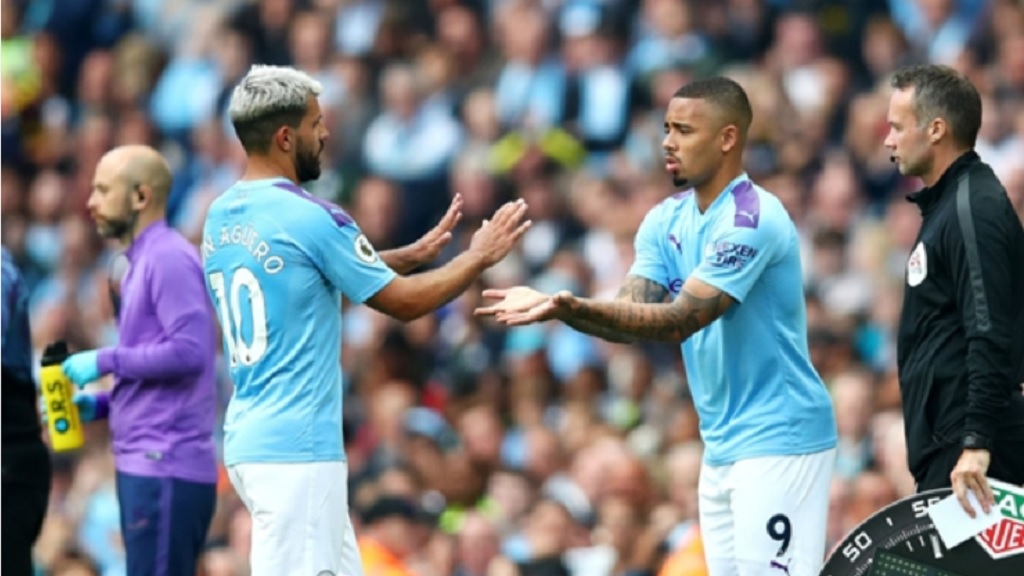 Guardiola's preferred system has space for just one out-and-out striker which means he regularly has to leave one of Aguero or Jesus on the bench.

Ahead of Saturday's clash with Everton at Goodison Park, Argentina forward Aguero has eight goals in six Premier League outings.

Brazil international Jesus has netted three goals in five appearances with one each in the Premier League, Champions League and EFL Cup.

Despite the obvious quality of both players, Guardiola suggested he is loath to revert to a different formation which means one - most likely Jesus - looks likely miss out against the Toffees.

Guardiola said: "Both guys are incredible. It's difficult for me. I try to move them and play both.

"Never any player will be happy if they don't play regularly. He plays he will happy, he does not play he will not be happy.

"But I try to let them both play as much as possible. Sometimes when they're injured, Gabriel or Sergio, the other one plays.

"In some games, Gabriel gives me something Sergio cannot give us. And the other games, Sergio gives us what Gabriel cannot. That is the quality.

"Normally I don't play with two strikers. I played with two against Norwich, in the last minutes, and it wasn't good. Our control isn't the best, we're not solid enough."

Guardiola acknowledged he has to handle the striking dilemma sensitively, especially when both players are fit and in good form, and often finds himself apologising to one of the pair.

"They're upset if they don't play, of course," he added.

"They want to play, and the manager says, 'You don't play'. How can they be happy? It's impossible. All I can say with the players is I'm sorry - I have to choose 11.

"We have many, many games, four competitions and of course everyone is necessary".

The 28-year-old was left on the bench for City's 3-2 defeat at Norwich and responded with a commanding display in their 8-0 thrashing of Watford.

Guardiola said in the aftermath of the win over the Hornets he was "frustrated" with aspects of De Bruyne's game but subsequently dismissed any notion the player had an attitude problem.

"When he's happy, his performance is incredible," Guardiola said.

"Like when I do my job, I'm happier so my job I do it better. I communicate better to my players.