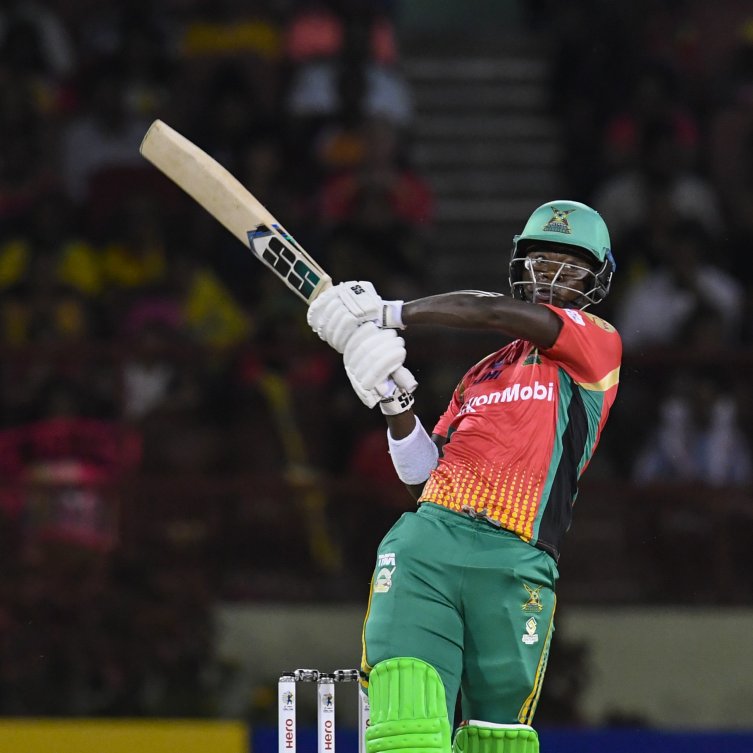 An extraordinary unbroken fifth-wicket partnership of 78 from just 29 balls between Nicholas Pooran and Sherfane Rutherford set Guyana Amazon Warriors on their way to a third straight Hero Caribbean Premier League (CPL) victory at the expense of Barbados Tridents.

This thumping 47-run victory means that last year’s runners-up have, like the team that beat them to the 2018 title Trinbago Knight Riders, gone three from three during the first home stint of their season.

For much of the Warriors innings, though, such a result looked far from certain. Chandrapaul Hemraj was the only one of the top four to get to grips with tricky batting conditions, dominating the early scoring to such an extent that when the Warriors had 31/1 on the board after the PowerPlay Hemraj had accounted for 27 of them.

When he fell for a well-compiled 63 from 55 balls, blending watchful defence and accumulation with six fours and three Hero Maximums, the innings looked in danger of falling away at 102/4 one ball into the 16th over.

Brandon King had top-edged a pull shot to give Leniko Boucher an easy catch behind the wicket for just 1. Saturday night’s hero Shimron Hetmyer had gone cheaply too, superbly caught goalkeeper style by sub-fielder Hayden Walsh Jr at point for 9 off the bowling of Roshon Primus, who also accounted for Warriors captain Shoaib Malik for 4 when an attempt to run the ball down to third-man succeeded only in steering the ball in to Boucher’s gloves.

But almost from the moment Rutherford and Pooran got together after Hemraj’s departure the game changed. Rutherford was the first to cut loose, smashing the fifth ball he faced clean out of Providence Stadium off Aussie paceman Josh Lalor. Back-to-back Hero Maximums followed for the 20-year-old off Holder in the next over before his best shot of the night off Primus. It was a low full-toss that Rutherford somehow managed to hit hard and flat over the fence at point with astonishing wristwork.

It was truly special stuff, taking Rutherford at that stage to 30 from 11 balls, but remarkably former Trident Pooran was about to upstage his partner. Having made 25 from the first 22 balls he faced, Pooran plundered a scarcely believable 36 from the last eight. Five of those deliveries disappeared into the stands, including two enormous hits over midwicket back-to-back off Primus. Raymon Reifer’s final over was marmalised, with three sixes in four balls over long-on, long-off and extra-cover. The middle of those three brought up Pooran’s 50, and what an innings it was.

As can happen, the momentum from the end of the Warriors’ batting effort carried into their bowling effort. Having impressed when opening the batting, Hemraj was also handed the new ball with instant results as the Tridents’ star signing Alex Hales was bowled first ball playing back when he ought to have been forward.

The ever-impressive Shadab Khan took care of Johnson Charles and Boucher before Malik brought himself into the attack and promptly enticed Jonathan Carter to drag on.

Worse was to come for the Tridents in the next over as an attempted second run to Keemo Paul’s bullet arm in the deep saw skipper Jason Holder caught inches short of his ground for just 4.

JP Duminy scrapped his way to 20 before dragging an awkward-looking pull shot into his stumps to hand Paul a first wicket of the night to leave the Tridents in tatters at 75/6.

Ashley Nurse restored some respectability with some lusty blows of his own, launching his very first ball straight back over Chris Green’s head for a Hero Maximum and adding a further two sixes and three fours in his 40 from 25 balls, but it was little more than damage limitation.

Pooran was again to the fore in Nurse’s downfall, flying to his left to take a superb leg-side catch as Nurse lap-swept Romario Shepherd, who then bowled Raymon Reifer round his legs first ball. Josh Lalor survived the hat-trick ball – just about, having decided to run down the wicket and try to blast it – but the game was long gone.

Shepherd finished things off with minimal fuss in his next over, having Primus well held low down by Hetmyer at long-on and then rearranging Sandeep Lamichhane’s stumps to finish with exceptional figures of 4/13 from just 2.4 overs.

Watch: Green and Paul propel Warriors to a winning total