Haitians seek medical help from US Navy ship amid protests 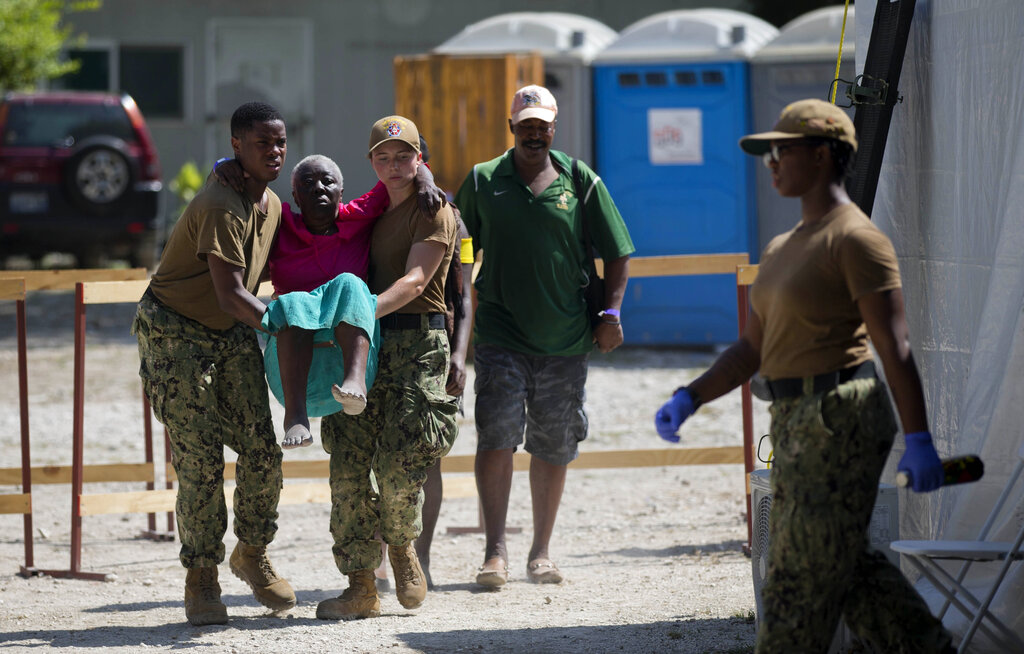 US soldiers carry an elderly Haitian woman to see a US military doctor from the US Navy hospital ship USNS Comfort anchored off Port-au-Prince, Haiti, November 8, 2019. (AP Photo/Dieu Nalio Chery)

Hundreds of Haitians with health problems ranging from diabetes to bullet injuries lined up on Friday hoping to be seen by a staff member aboard the USNS Comfort that docked in Port-au-Prince this week for its last stop of a five-month medical mission.

The US Navy's floating hospital has visited Haiti six times in the past decade. The latest mission comes at a critical moment when ongoing violent demonstrations and street barricades have caused several hospitals across the country to run out of medical supplies, forcing some to temporarily close as protesters keep demanding the resignation of President Jovenel Moïse.

Among those awaiting free medical care was 33-year-old Miga Alfred, whose 3-month-old daughter has hydrocephaly. The two live in the southern coastal town of Jacmel and had been traveling since 4 am.

"Hopefully, my baby will be treated," Alfred said as she breastfed her only child.

Others were not as lucky. Waiting outside in a line of more than 100 people was 35-year-old Mario Brega, who said he has prostate cancer. It was the second time this week that he stood in line, having traveled more than six hours by bus from the southwest town of Cavaillon.

"This has been costing me money, and I'm not sure I'm going to get to see a doctor," he said as police kept telling him to get back into line, where some huddled under umbrellas while others placed towels on their heads to protect themselves from the harsh sun.

More than 900 personnel were aboard the ship, including specialists from the US military and volunteers from non-government organisations, according to the US Navy. The team was providing care aboard the ship and at the Haitian Coast Guard base in the capital of Port-au-Prince, which has been wracked by two months of protests that have killed more than 40 people and shuttered many public schools.

The country-wide demonstrations have been spurred in part by anger over corruption, an inflation rate of nearly 20 percent and a dwindling of basic supplies including fuel. In addition, UN World Food Program spokesman Herve Verhoosel said Friday that more than 3.7 million people in the country of 11 million are facing food insecurity, with more than 1 million now in the emergency category, one step below famine.

Lt. Cmdr. Gustavo Lores, a supervisor at the medical site, said the team has been treating all sorts of medical problems including chronic illnesses and diabetic lesions.

"We see the need of the country," he said.

The team was treating people like Hilairesie Mondesir, 68, who said she hasn't been able to afford a doctor in more than a decade.

"Everything is hurting me," she said. "I don't feel well at all."

The ship's mission in Haiti runs from November 4-12. It had previously visited Central America, South America and other Caribbean islands.

Free surgeries for citizens on US naval ship