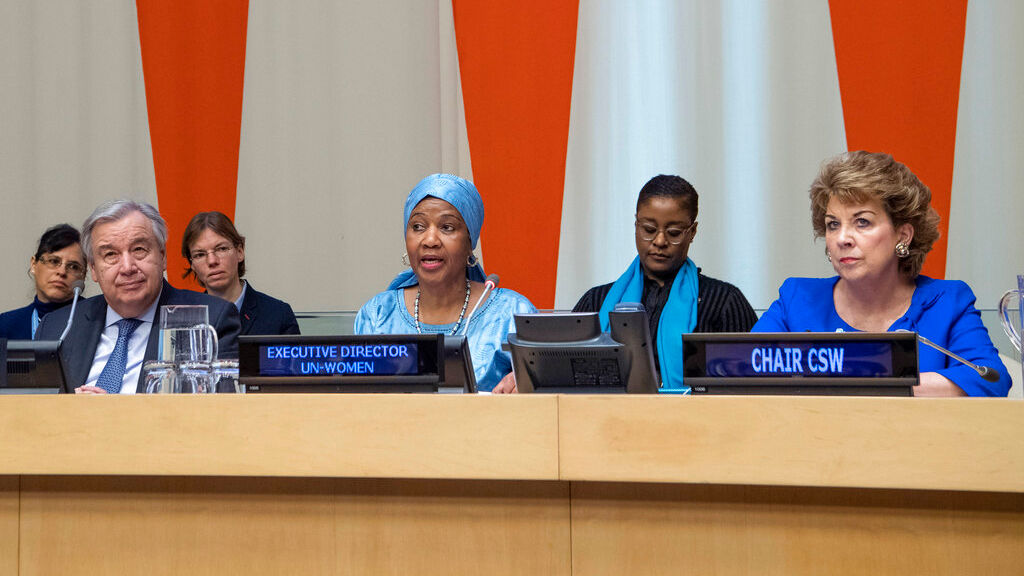 The head of the U.N. women's agency is calling for the revolution in technology to be used to benefit the world's poor, and especially women, who will not achieve gender equality without "the giant leap that 21st century innovations can bring."

Phumzile Mlambo-Ngcuka said in an interview and a speech ahead of the Commission on the Status of Women's annual meeting starting Monday that sanitation, clean water, good roads, affordable internet service and use of mobile phones to transfer money and pay bills are critical to changing women's lives.

"We have made progress toward gender equality. We have more women in significant roles, but we're still leaving many, many more women behind," the executive director of UN Women said. "Sometimes we even lose the gains that we've already made. And that is why we are emphasizing the importance of innovation and technology."

Mlambo-Ngcuka stressed that "the 21st century is about large ideas, scale and speed."

If technology and innovation aren't used to promote equality for women from agriculture and education to finance and health, she said, the "Fourth Industrial Revolution" of rapid technological change will happen "and the women will still be living in the previous industrial revolution, which also did not work for them very well."

Mlambo-Ngcuka said, "The good news is that for many of the problems we have today there are solutions that we know about."

She pointed to affordable internet service and the use of "mobile money" through mobile phones that is changing the lives of women in Kenya in the same way that microcredit — small loans — has enabled hundreds of thousands of women in developing countries to start businesses.

In some countries, "mobile money" can be used to pay for the delivery of water or buying energy, "so it's not a luxury to have that kind of infrastructure," Mlambo-Ngcuka said. "It's a game-changer. It changes for better the GDP of countries."

She noted that 80 percent of women in low-income and middle-income countries own mobile phones and "it would be a historic mistake to fail to make deliberate use of these technologies to advance gender equality."

Mlambo-Ngcuka said improving infrastructure to provide clean water means that girls don't have to walk miles to get water from a river and boil it.

In her native South Africa, she said, "providing free water, electricity and social protection for the poor has meant more children go to school and stay in school, and parents are able to have a decent life and reduce malnutrition."

In Rwanda, Mlambo-Ngcuka said, drones are being used to deliver medicine to rural areas, and in West Africa, drones are being used to oversee fields and sprinkle organic material to kill pests. And she said blockchain technology — storing digital information about transactions in a public database — can be used to deliver services to displaced people.

But Mlambo-Ngcuka said, "The bad news is that even though there are solutions, they are not being taken into account fully, even where it reduces the cost."

She said the biggest challenge in implementing the U.N. goal of achieving gender equality by 2030 is the need to accelerate the pace and scale-up action.

Infrastructure is one of the barriers, which she said is why it is a key focus of this year's two-week meeting of the Commission on the Status of Women.

The debate on the commission's final document is still underway, and Mlambo-Ngcuka said among the issues still being discussed are the affordability of infrastructure projects and how can they be financed, and the transfer of technology so that those in relatively agrarian countries can leapfrog to the internet era.

"Some countries think water is more important than broadband" high-speed internet access, "but you actually need both," she said.

When it comes to infrastructure for health care, Mlambo-Ngcuka said, some countries "don't want it to benefit sexual and reproductive rights," which are part of the 1995 platform for action to achieve gender equality adopted by the world's nations at the U.N. women's conference in Beijing.

"Some countries don't want to use the word gender — you must always say men and women, so that you do not include people who are gender non-conforming," she said.

Another challenge is ending violence against women, she said.

The #MeToo movement has helped expose the widespread prevalence of sexual harassment and abuse and shown that there are consequences, she said, and it has led to changes in some organizations and institution.

Mlambo-Ngcuka said it has been the technology of social media that has given women a platform to speak out against sexual harassment and sexual misconduct.

But she said greater efforts are needed to change bad laws and implement good laws against sexual harassment, abuse and domestic violence.

Looking to the future, Mlambo-Ngcuka said the world must not accept that it will take more than 200 years to achieve gender equality at the current pace.