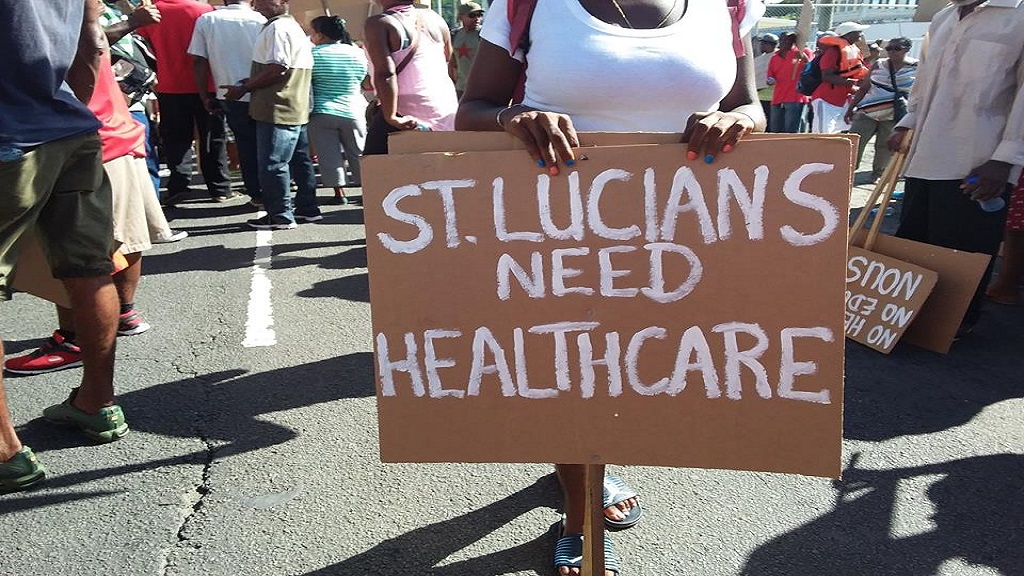 When Saint Lucians returned to work in the first week of 2018 after several days of feasting and feting, they were greeted with the astounding news that in 2017 an unprecedented 60 homicides were recorded. Never in the history of the country were so many homicides recorded in any single year. Many thought this would set the tone for a spirited debate on crime for the rest of the year. In fact it was thought that crime would be the most controversial of topics in 2018.

They were correct, in part that is, because crime did remain a highly charged and discussed issued throughout 2018, however it was overshadowed, in our estimation, by the health care controversy that took the nation by storm, created fissures in almost every facet of the society, defined even more sharply the political stance of several people and caused a unification of sorts of once fierce political opponents in a standoff against the government.

The intense but year-long controversy on health care centered primarily on the incomplete St. Jude Hospital, the completed yet unknown date for the commissioning of the Owen King European Union Hospital, the century-old Victoria Hospital and the harsh criticism of the government’s handling of the country’s health care system by the Saint Lucia Medical and Dental Association and the opposition Saint Lucia Labour Party.

It was Moses ‘Musa’ Jn. Baptiste, the Saint Lucia Labour Party’s Chairman, who threw the first controversial stone at the government’s health care regime when, in an article published in January, took Health Minister Senator Mary Isaac to task, claiming that since her appointment in 2016 there has been a rapid decline in the government’s attention to the serious issues of health in the country.

Said Jn. Baptiste, “Our primary health care services which are made up of our health centers and their services are lacking government’s support and in some cases outright neglect…

“What has happened to the refurbishment of the burnt La Ressource Health Center? The situation at Richfond Health Center has become critical…

“Why has the government not started work on the Anse La Raye Health center? The conditions of beds and equipment at the hospitals have not improved. Why has the Owen King-EU Hospital not been opened?

“The Minister for Health has been absent, seems confused or missing at work in relation to the major health issues in Saint Lucia,” Jn. Baptiste said.

As if in response to Jn. Baptiste, the government, a week later, opened the Dialysis Unit at the Owen King-EU Hospital despite its non-operational status.

In the days following, talk shows and newspaper articles touched on various aspects of the country’s health care. However, in early March the controversy over which administration first mooted the privatization of hospitals in Saint Lucia, particularly the Owen-EU Hospital, became widespread.

The privatization issue grew in intensity as the government spoke of its preference for privatization with regards to the Owen King-EU Hospital, in particular, prompting the opposition Saint Lucia Labour Party to vow to fight that type of management for the hospital.

By the end of the first quarter of 2018, the controversy over the government’s pronouncement of privatization for St. Jude Hospital and the OKEU Hospital had gone viral. The whole nation it seems was talking about that mode of operation for the hospitals.

The controversy grew to the point where three trade unions aligned to the Trade Union Federation (TUF) went public demanding information from the prime minister regarding the privatization of the OKEU Hospital. By then Saint Lucians involved in the health care system were also making their voices heard.

Nurses wanted to know where they stood in the scheme of things and whether with privatization they would keep their jobs or be terminated. They refused to be silenced despite Prime Minister Allen Chastanet’s constant assurances that none would lose their jobs.

Even while the nurses were calling for better assurances from the government regarding their employment status, the Medical and Dental Association was putting pressure on the government for not providing its members with what it termed “key information on the very important health care issue.”

The Association claimed that there was a lack of consultation, transparency and accountability on the part of the government regarding health care in the country.

There seems to be a general consensus on one aspect of the country’s health care, that it is in need of repair. However, neither of the sides tugging at each other could come up with a solution, each agrees with, on how to fix it.

But as the second quarter of 2018 came into view, the controversy swirling in the country’s health care system shifted from privatization of the aforementioned hospitals to the conditions in which staff at the makeshift hospital in the George Odlum Stadium has to face on a daily basis.

The controversy deepened in intensity as story after story came out about how deplorable the place was. Even the National Workers Union entered the fray noting that it was aware of the problems facing workers there.

On the heels of that came a new attack on the government spearheaded by the SLP and the Medical and Dental Association focusing on the incomplete St. Jude Hospital, with both parties calling on the government to complete the project and give the people of the south their hospital.

With back to back press conferences and constant media appearances, the two sides kept the issues plaguing the health care system in the public's minds for most, if not all of the year.

The focus on the St. Jude Hospital Rehabilitation Project moved the health care controversy in the country to a whole new level as more and more information about the project came to light.

Adding to that hullabaloo were the many questions raised about the prime minister’s interest in the Caymans Island Group as a contractual partner in the management of the OKEU Hospital or as the one to manage the hospital.

With allegations flying all over the place concerning that part of the controversy, government was forced to step in to clarify a few points but not before knocking down the allegations as ‘fake news’.

At one point, in less than a week, government, the opposition and health care professionals all took to the airwaves to outline their various points of views with respect to several controversial topics discussed in the media.

Yet despite the loud voicing of concerns made by the various groups, lingering doubts that the points raised will be dealt with conclusively remain, right down to the end of the year.

However as 2018 comes to a close government has given word that not only will St. Jude Hospital be completed and commissioned within the remaining years it has in this term, but the OKEU Hospital will be commissioned as well.