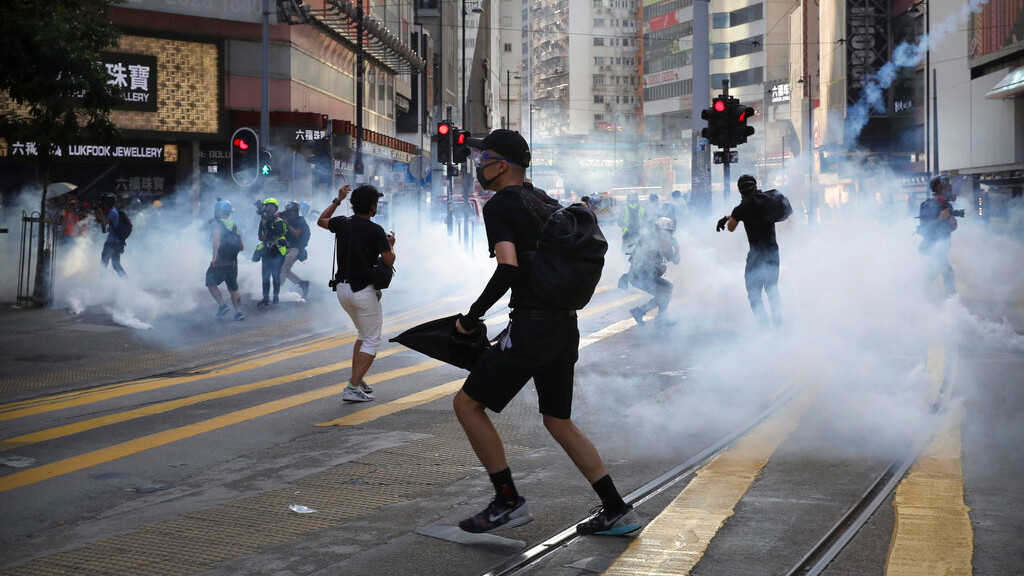 By day, the small commercial kitchen in a Hong Kong industrial building produces snacks. At night, it turns into a secret laboratory assembling a kit for pro-democracy protesters seeking to detox after repeated exposure to tear gas.

Volunteers seated around a kitchen island sort and pack multicolored pills into small resealable bags. At another table, a woman makes turmeric pills by dipping gelatin capsules into a shallow dish of the deep orange spice.

“Police have used so much tear gas and people are suffering,” said the owner of the kitchen, speaking on condition of anonymity because she fears repercussions for her business. “We want to especially help frontline protesters, who have put their lives on the line for the city.”

Hong Kong police have fired more than 10,000 tear gas canisters to quell violent protests that have rocked the city for six months. The movement’s demands include fully democratic elections and an investigation into police use of force, including tear gas.

Its heavy and prolonged use in Hong Kong — one of the world’s most densely populated cities and known for its concrete jungle of high-rises — is unusual and has sparked health fears.

“I don't think there have been circumstances where there has been this level of repeated exposure for people to tear gas. What's going on in Hong Kong is pretty unprecedented,” said Alistair Hay, a British toxicologist from the University of Leeds.

Police have fired it in cramped residential areas and near hospitals, shopping malls and schools, affecting not only protesters but also children, the elderly and the sick.

Some worry that tear gas residue could stick for days or weeks to asphalt, walls, ventilation ducts and other places. Parents, schools and various community groups have demanded to know the chemical makeup of the gas — which police won’t divulge — so they can clean up properly.

In the absence of official information, some parents have stopped taking their kids to parks, and online tips urge mothers to refrain from breastfeeding for a few hours if they are exposed the gas. Many avoided fresh fruits after a wholesale market that supplies half of the city’s supply was gassed last month.

New daily rituals include using a baking soda solution to bathe, wash clothes and clean surfaces. Tips shared by protesters include not bathing in hot water after exposure as it is believed it will open pores and let the chemicals seep in.

The kits contain capsules that include vitamins and other natural ingredients and are packed into a small pouch with 10 bottles of a cloudy caramel-colored drink that contains an antioxidant said to be an immune-system booster. They come with instructions for a 10-day detoxification program that includes no alcohol and smoking.

It has not been scientifically tested for treating tear gas symptoms, but the kitchen owner claimed that feedback was positive from a first batch distributed to frontline protesters through a clandestine network of first-aid and social workers.

Hay, the toxicologist, said that excessive concentrations of CS gas, a common tear gas component, and residue that persists in the environment could cause prolonged symptoms and health complications for vulnerable groups.

A survey in August by a group of doctors of some 170 reporters covering the protests found most of them had difficulty breathing, persistent coughing or coughed up blood, skin allergies and gastrointestinal symptoms such as diarrhea or vomiting, according to Hong Kong media reports.

Further spooking residents are reports that the tear gas could emit dioxin, a cancer-causing substance. Hay said he wasn’t aware of any cases of tear gas-producing dioxin, although it could, in theory, be released if the canister burns above 250 degrees Celsius (480 degrees Fahrenheit).

Government officials say that any toxin found could come from the many street fires set off by protesters. They refuse to reveal the components of the gas, citing operational sensitivities.

The Chinese University of Hong Kong, where more than 1000 rounds of tear gas were fired on a single day last month, hired an independent laboratory to test air, water and soil samples. Preliminary tests reportedly showed no harmful substances.

Nonetheless, a high school near the campus hired professional experts to decontaminate its grounds.

A 17-year-old volunteer helping make the detox kits said he has joined many protests and often experienced stomach cramps, nausea and rashes for days after being gassed. During a rally in June, he said couldn’t breathe and thought he was going to die.

Another volunteer said she can see clouds of tear gas in the streets below her apartment in Mongkok, a hot spot for protests, and smell it even with her windows closed.

She doesn’t have the courage to join the protests, she said, but feels she must contribute.

Both spoke on condition of anonymity, fearing retribution in a city that has become starkly divided by the violent protests.