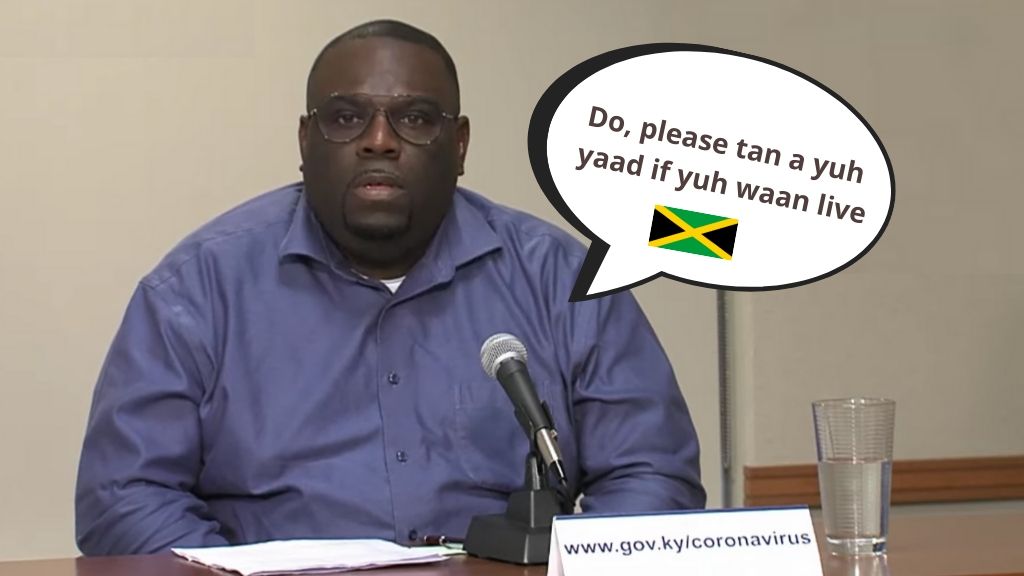 “Do, please tan a yuh yaad if yuh waan live.”

These were the words of Cayman Islands’ Minister of Health, the Honourable Dwayne Seymour, instructing Jamaicans to stay home during the coronavirus lockdown, if they value their lives.

As a Yardie in Cayman, the patois reference both caught me off guard and resonated deeply as it brought flashbacks of hurricane and flood warnings as a child when my grandmother would sternly tell me to, “tan inna di yard an nuh mek wata draw yuh wey.”

I take the Minister’s warnings seriously as I did my grandmother’s but I can’t help but think of other creative ways to get yardies to stay home during this time of crisis.

Here are 5 ways to get Jamaicans in Cayman to stay home.

Bellyful of laughter and nostalgia will have Jamaicans in Cayman staying indoors for weeks! And two of Jamaica’s most iconic comedians and television actors will surely do the trick. “Oliver,” starring national treasure Oliver Samuels, was once a favourite Jamaican sensation that had families gathering around their televisions. “Titus” starring the talented Glen Campbell provided hilarious perspectives on everyday Jamaican life.

Convince them that Cayman is suddenly overrun by duppies and that rolling calves are roaming the streets.

Jamaicans “fraida” a duppy like puss! And every Jamaican is familiar with the folktales of spirits that take the form of cows that gallop along roadways at night with heavy chains trailing behind them. Jamaicans don’t want to get box by a duppy... and Cayman have plenty of duppy stories to bring to life!

Every four years the world cup is must-watch on television in Jamaica. But this was the summer Jamaica stood still. Jamaicans spent eight weeks glued to their television watching as The Reggae Boyz celebrated qualifying for the world cup and went through the early rounds. Although the boyz never made it past the group stage, this world cup was special.

Sure, Bounty Killa has his reputation for past dancehall songs but the “Warlord” has come full circle to be a voice for the people. In recent times he can be found speaking on various issues affecting society in his usual gruff tone and he has always been able to demand respect and attention. Can you just imagine Bounty saying to Jamaicans in Cayman, “Tan a yuh yaad! I are not di one! Cross…angry…miserable!”

Convince them that these are “the end times”

OK, this is one is a bit controversial but there is no denying that Jamaicans are religious and highly superstitious. My own mother called me one night around 11.45 pm to ask if I realized that these are the end times, to which I responded with a shrug. She promptly pointed to the fires in the Amazon, swarms of locusts in Kenya as well as the impact of coronavirus to prove her point. I have not stepped foot outside since. Works like a charm.

When Caymanian and Jamaican sayings "buck up"