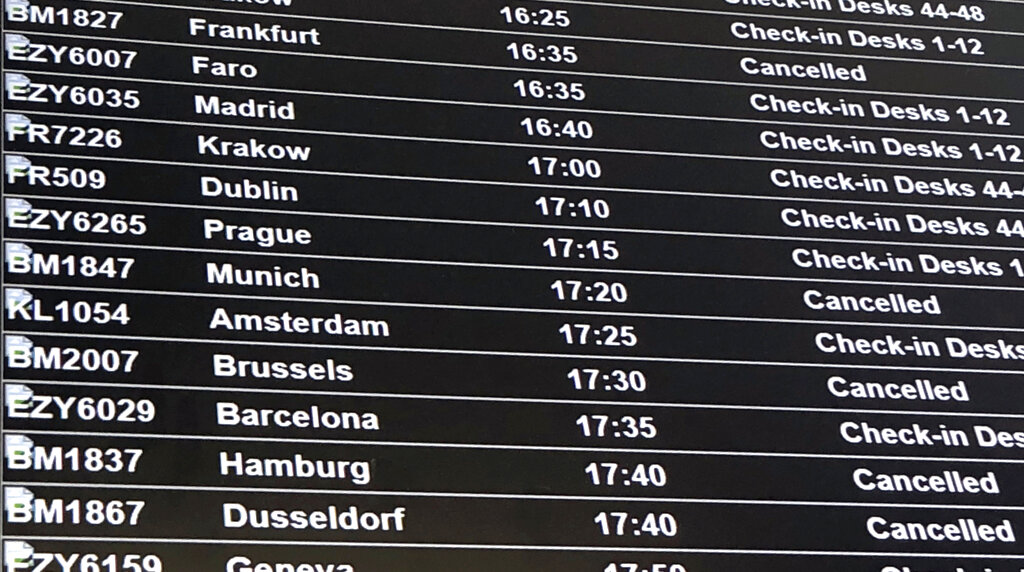 A departure board showing the BMI flights cancelled following the collapse of the airline, at Bristol Airport in Bristol, England, Sunday, Feb. 17, 2019. Hundreds of passengers have been stranded by the abrupt collapse of the British regional airline Flybmi. The airline says it's filing for administration _ a British version of bankruptcy because of higher fuel costs and uncertainty caused by Britain's upcoming departure from the European Union. (PA via AP)

Hundreds of passengers throughout Europe have been stranded by the abrupt collapse of the British regional airline Flybmi.

British Midland Regional Limited, which operates as Flybmi, said it's filing for administration — a British version of bankruptcy — because of higher fuel costs and uncertainty caused by Britain's upcoming departure from the European Union.

"Current trading and future prospects have also been seriously affected by the uncertainty created by the Brexit process, which has led to our inability to secure valuable flying contracts in Europe and a lack of confidence around bmi's ability to continue flying between destinations in Europe," the airline said on its website late Saturday.

The airline thanked workers for their dedication and said "it is with a heavy heart that we have made this unavoidable announcement."

The airline operated 17 jets on routes to 25 European cities. It employed 376 people in Britain, Germany, Sweden and Belgium and says it carried 522,000 passengers on 29,000 flights last year.

Pilots union chief Brian Strutton said the airline's collapse came with no warning and "is devastating news for all employees."

"Our immediate steps will be to support Flybmi pilots and explore with the directors and administrators whether their jobs can be saved," he said.

Britain is scheduled to leave the EU on March 29 but there are serious doubts about whether the British Parliament will approval the Brexit withdrawal deal that Prime Minister Theresa May negotiated with the EU. That is making it more difficult for businesses to plan for the separation.

Flybmi said all flights will be cancelled and advised passengers to seek refunds from credit card issuers, travel agents or travel insurance companies.

Passengers were told not to travel to the airport Sunday unless they had made arrangements directly with other airlines. Flybmi said it would not be rescheduling passengers on other airlines' flights.

Many passengers were left stranded by the shutdown. Hannah Price told Sky News she was planning to return Monday to Britain from Brussels on Flybmi.

"Unfortunately for me, I was supposed to be flying home with them in less than 48 hours to Bristol. I don't think that's going to happen now," she said.

The collapse will have a major impact on the Northern Ireland city of Derry, also known as Londonderry, which will lose its only air connection to London. Officials at the City of Derry Airport said they were urgently seeking a new carrier to keep the link open.

Flybmi was still seeking customers up until the day before its collapse, urging people in a tweet to book flights to Germany for a winter sports holiday.