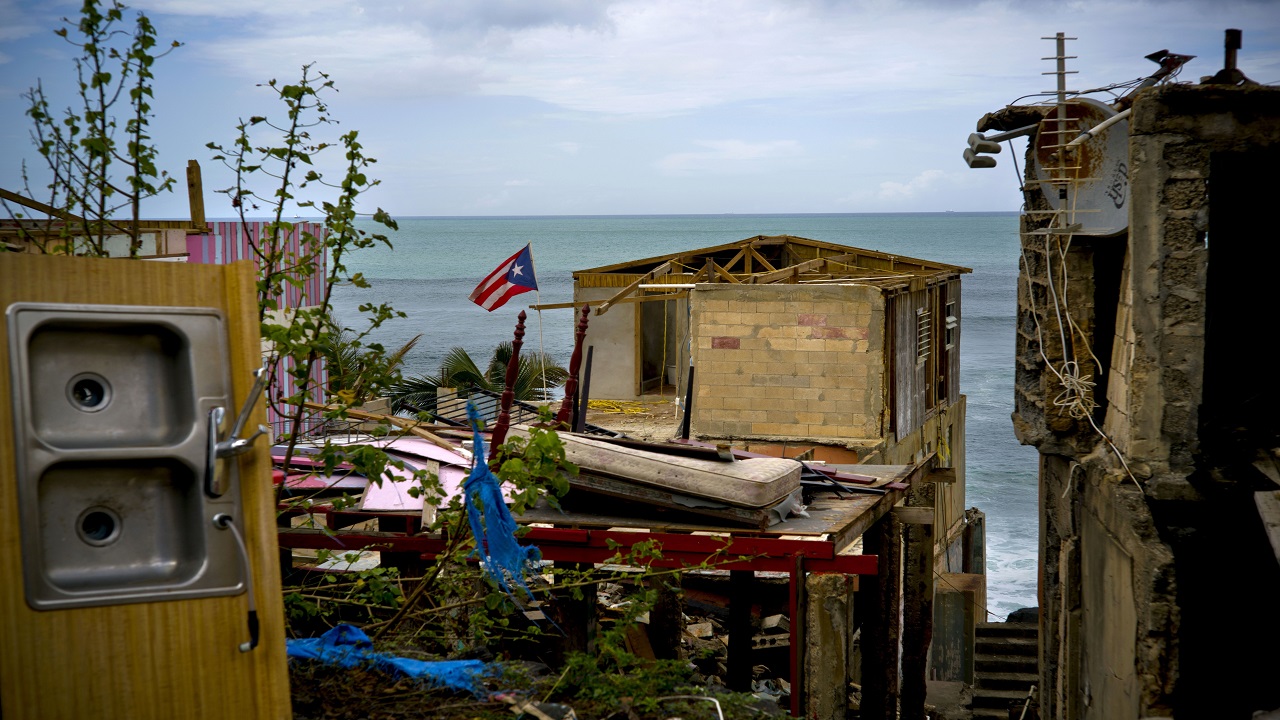 A Puerto Rican national flag is mounted on debris of a damaged home in the aftermath of Hurricane Maria in the seaside slum La Perla, San Juan, Puerto Rico. An independent investigation ordered by Puerto Rico’s government estimates that nearly 3,000 people died as a result of Hurricane Maria. The findings issued Tuesday, Aug. 28, 2018, by the Milken Institute School of Public Health at George Washington University contrast sharply with the official death toll of 64. (AP Photo/Ramon Espinosa)

Puerto Rico's governor raised the US territory's official death toll from Hurricane Maria from 64 to 2,975 on Tuesday after an independent study found that the number of people who succumbed in the desperate, sweltering aftermath had been severely undercounted.

The new estimate of nearly 3,000 dead in the six months after Maria devastated the island in September 2017 and knocked out the entire electrical grid was made by researchers with the Milken Institute School of Public Health at George Washington University.

"We never anticipated a scenario of zero communication, zero energy, zero highway access," Governor Ricardo Rossello told reporters. "I think the lesson is to anticipate the worst. ... Yes, I made mistakes. Yes, in hindsight, things could've been handled differently."

He said he is creating a commission to study the hurricane response, and a registry of people vulnerable to the next hurricane, such as the elderly, the bedridden and kidney dialysis patients.

Rossello acknowledged Puerto Rico remains vulnerable to another major storm. He said the government has improved its communication systems and established a network to distribute food and medicine, but he noted that there are still 60,000 homes without a proper roof and that the power grid is still unstable.

"A lesson from this is that efforts for assistance and recovery need to focus as much as possible on lower-income areas, on people who are older, who are more vulnerable," said Lynn Goldman, dean of the Milken institute.

Tuesday's finding is almost twice the government's previous estimate, included in a recent report to Congress, that there were 1,427 more deaths than normal in the three months after the storm.

The George Washington researchers said the official count from the September 20 hurricane was low in part because doctors were not trained in how to classify deaths after a disaster.

The number of deaths from September 2017 to February 2018 was 22 percent higher than during the same period in previous years, Goldman said.

The number of dead has political implications for the Trump administration, which was accused of responding half-heartedly to the disaster. Shortly after the storm, when the official death toll stood at 16, President Donald Trump marveled over the small loss of life compared to that of "a real catastrophe like Katrina."

Hurricane Katrina, which struck New Orleans in 2005, was directly responsible for about 1,200 deaths, according to the National Hurricane Center. That does not include indirect deaths of the sort the George Washington researchers counted in Puerto Rico.

The White House issued a statement on Tuesday noting that it sent 12,000 personnel to Puerto Rico for response and recovery efforts, and said it would continue to support the island's government and its communities in their recovery for years to come.

"The American people, including those grieving the loss of a loved one, deserve no less. The president remains proud of all of the work the federal family undertook to help our fellow citizens in Puerto Rico," it said.

Yet many remain outraged at both the local and federal governments.

"These numbers are only the latest to underscore that the federal response to the hurricanes was disastrously inadequate and, as a result, thousands of our fellow American citizens lost their lives," she said in a statement.

There is no national standard for how to count disaster-related deaths. While the National Hurricane Center reports only direct deaths, such as those caused by flying debris or drowning, some local governments may include indirect deaths from such things as heart attacks and house fires.

Researchers with George Washington said they counted deaths over the span of six months — a much longer period than usual — because so many people were without power during that time.

"That caused a number of issues," Goldman said, explaining that people were forced to exert themselves physically or were exposed to intense heat without fans or air conditioning. "It's fairly striking that you have so many households without electricity for so long. That's unusual in the US after a disaster."

Power has not yet been fully restored to Puerto Rico nearly a year after the hurricane, and outages remain common.

Puerto Rico's government released data in June showing increases in several illnesses in 2017 that could have been linked to the storm: Cases of sepsis, a serious bloodstream infection usually caused by bacteria, rose from 708 in 2016 to 835 last year. Deaths from diabetes went from 3,151 to 3,250, and deaths from heart illnesses increased from 5,417 to 5,586.

Bethzaida Rosado said government and health care officials were not prepared for the storm, and she is still angry her 76-year-old mother died because oxygen tanks were not available on the island after the hurricane.

"Do you know what it's like to see your mother run out of oxygen?" she said. "I don't wish that on anyone."

Months ago, the Rossello administration stopped updating its official death toll at 64 and ordered the independent investigation amid suspicions the dead were substantially undercounted.

The first phase of the study cost $305,000. In the second phase, the researchers plan to focus on the causes of death.

The researchers found that the risk of death was 45 per cent higher for those living in impoverished communities, and that men over 65 saw a continuous elevated risk of death.

They also reported that physicians and others told them that Puerto Rico's government did not notify them about federal guidelines on how to document deaths related to a major disaster.

"Others expressed reluctance to relate deaths to hurricanes due to concern about the subjectivity of this determination and about liability," the report said.

For the study, the researchers reviewed mortality data from July 2010 to February 2018. They also took into account an 8 percent drop in Puerto Rico's population in the six months after the storm, when tens of thousands fled because of the damage.

However, they did not share details of their methodology, saying those will be released if the study is published in a scientific journal.

"We did not cherry-pick, I can promise you," Goldman said. "We used very rigorous methodology."

The study also found that government emergency plans in place when Maria hit were not designed for hurricanes greater than a Category 1. Maria was a Category 4 with 154 mph winds. Damage was estimated at more than $100 billion.

The researchers made several recommendations, including more emergency planning and government training for doctors on filling out death certificates. They also said the public health system needs to be strengthened, though Goldman said they don't know yet whether those weaknesses contributed to storm-related deaths.

Rossello pledged to carry out the recommendations, though there are questions about Puerto Rico's ability to do so. The island is trying to restructure a portion of its more than $70 billion public debt amid a 12-year recession.

A stunned Puerto Rico seeks to rebuild after Hurricane Maria

Trump speaks out about Africa again, and many cringe