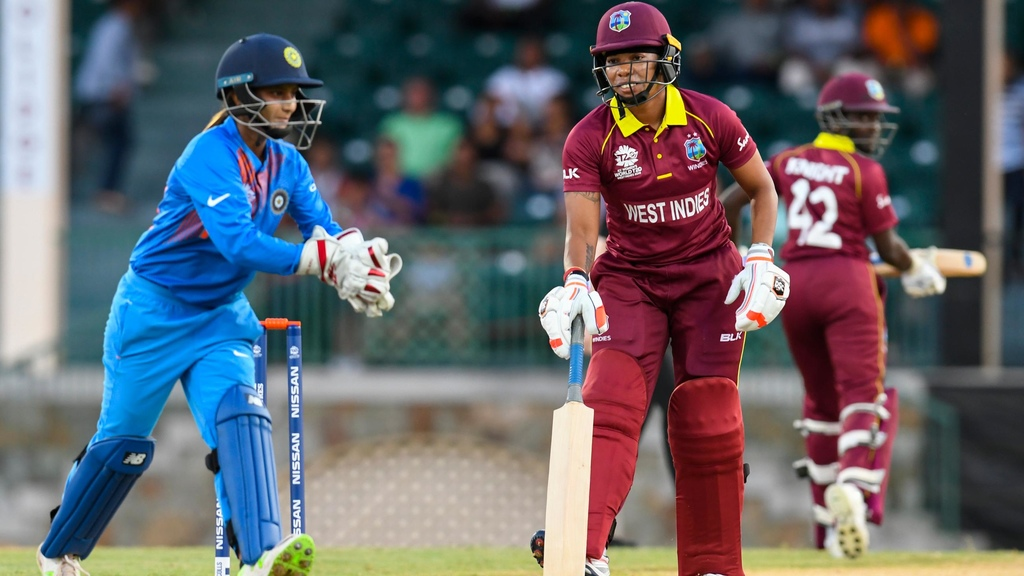 Tanya Bhatia (L) of India stops Chedean Nation (R) of Windies from scoring during a warm-up match at Coolidge Cricket Ground on November 4, 2018 in Coolidge, Antigua

Finalists at last year’s ICC Women’s World Cup in England and Wales, India punched above their weight in the shorter format to gain confidence ahead of the 10-team tournament even as New Zealand recorded a six-wicket victory over Sri Lanka in another match in Antigua. Bangladesh also won their opening practice match by six wickets over Ireland.

Electing to bat, the Windies opener Hayley Matthews (41 off 37 balls) made an explosive start. However, India’s bowlers fought back and restricted the tournament hosts to 115 for eight. Leg-spinner Poonam Yadav took the important wicket of Matthews before Radha Yadav took two quick wickets to suppress the destructive Windies middle order and finished with figures of two for 13 from four overs.

India’s reply got off to a bad start with the loss of Mithali Raj for a duck. However, another opener Smriti Mandhana was able to steady the innings and set up the victory for India after making an impressive 32 off just 20 balls. The game was rain affected and India was set a revised target of 75 in 12 overs. Despite accurate bowling from Deandra Dottin — which saw her finish with three wickets — India held on to clinch victory with just three balls to spare.

“It was a really exciting game and I am really happy with how our team played today. This is the kind of performance I expect from my team and I hope we can take this confidence into the tournament. It is always nice to win, and we have set high standards for the team, we did really well in the last ODI World Cup and we are expecting good results again here,” said India captain Harmanpreet Kaur.

Windies’ stand-in captain Hayley Matthews said everybody got an opportunity with bat and the ball and that is important.

“Despite the loss, we got to see what we have and what the opposition India, have as well. We are looking forward to playing in Guyana and St Lucia now. They are two great and historic grounds, we know the conditions and will have lots of support, so that should help us.”