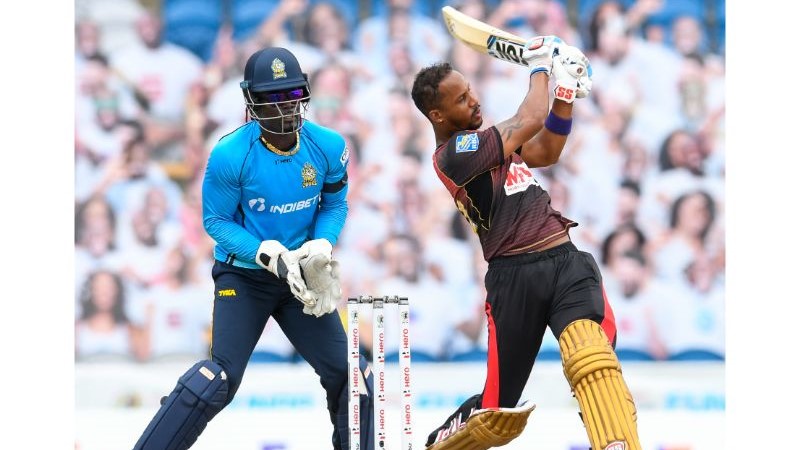 Lendl Simmons hits a six during the 2020 Caribbean Premier League final between the St Lucia Zouks and the Trinbago Knight Riders on 10th September 2020 at the Brian Lara Cricket Academy. (Photo by Randy Brooks - CPLT20/Getty Images)

The Trinbago Knight Riders (TKR) cruised to an eight-wicket win over the St Lucia Zouks to win the 2020 Caribbean Premier League title and become the first team to go unbeaten through a season.

After they were put in to bat, the Zouks raced off to 60/1 after six overs as the Knight Riders, who were without an injured Sunil Narine, struggled to control the aggressive pair of Andre Fletcher (39) and Mark Deyal (29).

However, the introduction of Kieron Pollard and Fawad Ahmed saw a change in the dynamics of the game, with both batsmen dismissed in the space of 14 balls.

The Knight Riders assumed control after that with Pollard taking 4/30, including two wickets and a run out in the 19th over, and Fawad Ahmed 2-22.

Roston Chase (22) and Najibullah Zadran (24) briefly raised hopes of resurrecting Zouks' hopes with a 4th wicket partnership of 26 before Pollard ended hopes of a total over 175.

The batsmen put on an outstanding, unbroken third-wicket partnership of 138 to clinch victory for the Knight Riders.

The TKR becomes the first team to go unbeaten through an entire CPL season and claim their 4th CPL title and 3rd in four tournaments.

"We used our experience," says Pollard after 2020 CPL win