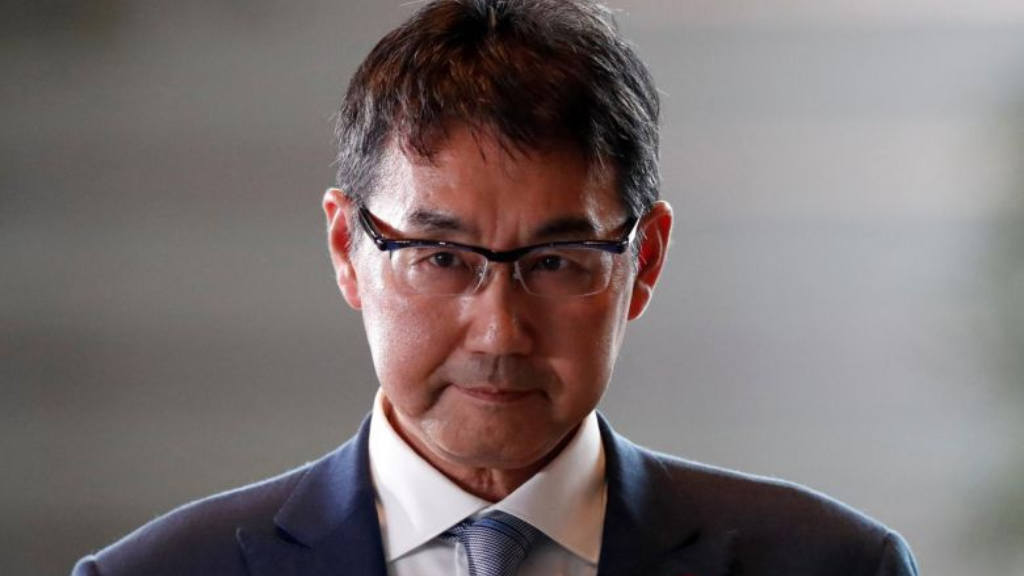 Japan's justice minister resigned Thursday over election payment allegations involving his wife, also a lawmaker, and about his own reported gift-giving, becoming the second Cabinet minister to step down in a week.

Katsuyuki Kawai's resignation and that of the trade minister last Friday are an embarrassment to Prime Minister Shinzo Abe's government, which has been plagued by a series of gaffes that have prompted public anger. In his nearly seven years in office, Abe has managed to shake off various scandals, and support ratings for his Cabinet have been generally stable, in part because of a weak opposition and voter indifference.

Abe told reporters he accepted the resignation submitted by Kawai, who said he did not want to cause trouble for the government's justice policies because of the scandal.

"I decided to respect his decision ... I was the one who appointed Mr. Kawai and I deeply feel my responsibility for causing this result," Abe said. "I offer my deep apologies to the people."

Kawai denied he or his wife did anything wrong.

"I believe both my wife and I carried out our election campaigns by abiding by law," Kawai said. "I will thoroughly investigate the case and fulfill my accountability."

Isshu Sugawara resigned just six days ago as trade minister over allegations that he and his aides offered money and gifts to his supporters in violation of election laws. He also denied wrongdoing and said he resigned to not cause trouble.

Payments and gifts are considered bribes that are against election laws. The two ministers have not faced a criminal investigation by police or prosecutors.

Both ministers were appointed when the Cabinet was reshuffled in September after Abe's ruling coalition won a comfortable majority in July elections in the upper house, the less powerful of parliament's two chambers.

Abe's Cabinet has been plagued by recent gaffes. Defense Minister Taro Kono called himself "a rain-bringing man" because Japan was hit by three typhoons within weeks of him assuming the post, triggering criticism that his comment was insensitive to people who suffered losses from those storms.

Education Minister Koichi Hagiuda was criticized for saying that students should compete for university exams within their means while referring to a planned introduction of private English tests starting in 2021. The suggestion that rich students could take practice tests was interpreted as an acceptance of social disparity.

Chief Cabinet Secretary Yoshihide Suga, who was seen close to the two former ministers, said "We must accept severe criticisms from the public over the scandals and get a grip on ourselves."

Abe took office in December 2012 and is set to become the longest-serving prime minister in Japanese post World War II history next month.

The Weekly Bunshun tabloid magazine reported that Kawai's wife, Anri, is alleged to have paid her staff allowances exceeding legal limits, in what the magazine called "election staff bribery."

Kawai himself sent gifts such as boxes of potatoes, corn and other items to his supporters, the article said, accusing him of vote buying.

The article said Anri Kawai paid 13 female campaign "announcement" staff twice as much as the legal limit of 15,000 yen ($138) per day for the July election in her home district in Hiroshima, where she won a seat.