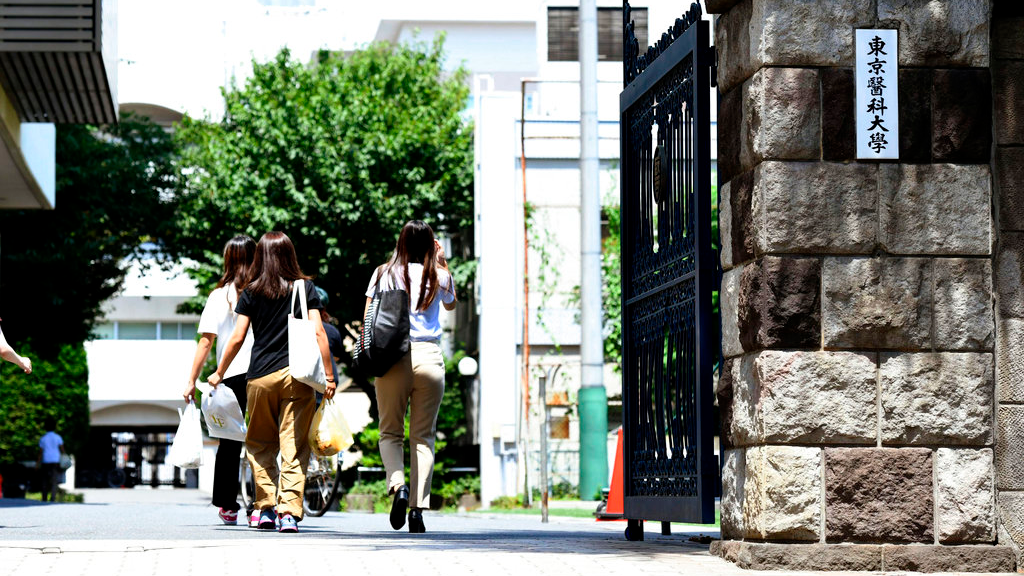 FILE - In this Thursday, Aug. 2, 2018, file photo, people walk into Tokyo Medical University in Tokyo. The medical university confirmed Tuesday, Aug. 7, 2018, after an internal investigation that it systematically altered entrance exam scores for years to keep out female applicants and ensure more men became doctors. The manipulated all entrance tests results since 2000 or even earlier.T he Japanese plate at right reads: "Tokyo Medical University." (Ayaka Aizawa/Kyodo News via AP, File)

A Tokyo medical school apologized Tuesday after an internal investigation confirmed that it systematically altered entrance exam scores for years to limit the number of female students and ensure more men became doctors.

Tokyo Medical University manipulated all entrance exam results starting in 2000 or even earlier, according to findings released by lawyers involved in the investigation, confirming recent reports in Japanese media.

The school said the manipulation should not have occurred and would not in the future. It said it would consider retroactively admitting those who otherwise would have passed the exams, although it did not explain how it would do so.

The manipulation was revealed during an investigation into the alleged "backdoor entry" of an education ministry bureaucrat's son in exchange for favorable treatment for the school in obtaining research funds. The bureaucrat and the former head of the school have been charged with bribery.

The investigation found that in this year's entrance exams the school reduced all applicants' first-stage test scores by 20 percent and then added at least 20 points for male applicants, except those who had previously failed the test at least four times. It said similar manipulations had occurred for years because the school wanted fewer female doctors since it anticipated they would shorten or halt their careers after becoming mothers.

The education ministry official's son, who had failed the exam three times, was given a total of 20 additional points, which elevated him to just above the cutoff line.

The report said the manipulation was "profound sexism," according to lawyer Kenji Nakai. He said the report only covered the latest exam results because of time constraints, and that further investigation is needed.

"We sincerely apologize for the serious wrongdoing involving entrance exams that has caused concern and trouble for many people and betrayed the public's trust," school managing director Tetsuo Yukioka said. He denied any previous knowledge of the score manipulation and said he was never involved.

"I suspect that there was a lack of sensitivity to the rules of modern society, in which women should not be treated differently because of their gender," he said.

Yukioka said women were not treated differently once they were accepted, but acknowledged that some people believe women were not allowed to become surgeons.

Nearly 50 percent of Japanese women are college educated — one of the world's highest levels — but they often face discrimination in the workforce. Women also are considered responsible for homemaking, childrearing and elderly care, while men are expected to work long hours and outside care services are limited.

Studies show the share of female doctors who have passed the national medical exam has plateaued at around 30 percent for more than 20 years, leading some experts to suspect that other medical schools also discriminate against women.

Education Minister Yoshimasa Hayashi told reporters that he plans to examine the entrance procedures of all medical schools.

Gender equality minister Seiko Noda was quoted by Kyodo News as saying that "It is extremely regrettable if medical schools share a view that having female doctors work at hospitals is troublesome."