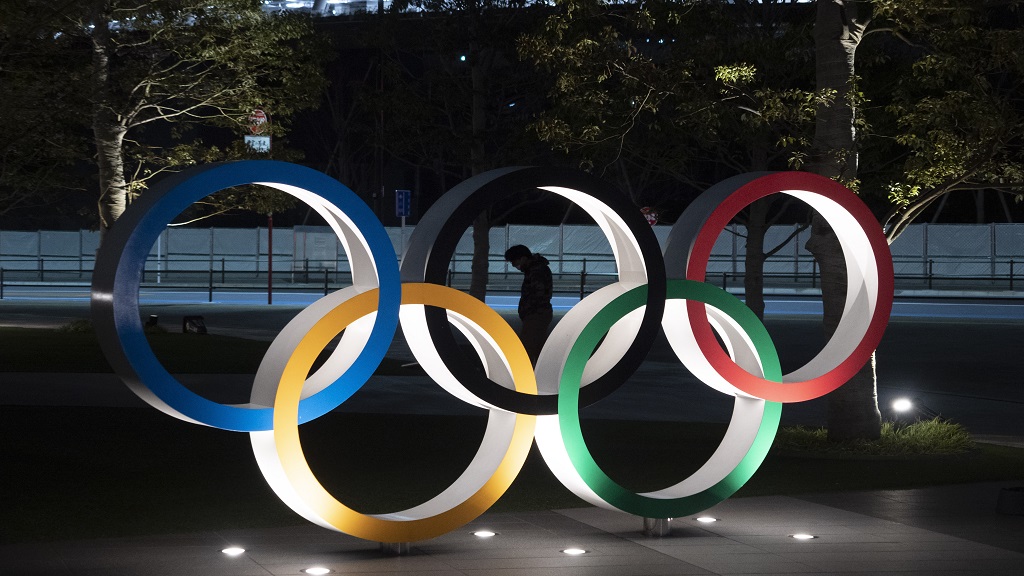 In this Tuesday, March 24, 2020 file photo, a man is seen through the Olympic rings in front of the New National Stadium in Tokyo. The Tokyo Olympics were postponed a month ago. But there are still more questions than answers about the new opening on July 23, 2021 and what form those games will take. (AP Photo/Jae C. Hong, File).

The medical community in Japan is moving toward a consensus that holding next year's Tokyo Olympics may hinge on finding a coronavirus vaccine.

Japan Medical Association president Yoshitake Yokokura said in a video media conference on Tuesday that the Olympics were possible only if the infections were under control, not only in Japan, but globally.

"In my view, it would be difficult to hold the Olympics unless effective vaccines are developed,” Yokokura said.

He did not say whether he opposes the Olympics without vaccines.

Japan has reported 13,576 COVID-19 cases, and 712 others from a cruise ship quarantined near Tokyo earlier this year. On Tuesday, the health ministry reported 389 total deaths from the virus.

Japan and the International Olympic Committee (IOC) agreed to postpone the Tokyo Games until July 23, 2021, because of the coronavirus pandemic. Japan is under a month-long state of emergency amid a rapid increase of infections across the country

A Japanese professor of infectious disease said last week he was also skeptical the Olympics could open in 15 months.

“I am very pessimistic about holding the Olympics Games next summer unless you hold the Olympic Games in a totally different structure such as no audience, or a very limited participation," said Kentaro Iwata, professor of infectious disease at Kobe University.

Yoshiro Mori, a former prime minister and now president of the organising committee, told the newspaper Nikkan Sports there would be no more delays if the games can't be held in 2021.

“No, in that situation, it will be canceled," he said. “In the past, when there were such problems, like wartime, it has been canceled. This time, we are fighting an invisible enemy.”

Mori added: “This is a gamble for mankind. If the world triumphs over the virus and we can hold the Olympics, then our games will be so many times more valuable than any past Olympics.”

Devi Sridhar, a professor of Global Health at the University of Edinburgh, also said holding the Olympics may depend on finding a vaccine. This could also apply to the 2022 Beijing Winter Olympics in China, where the coronavirus was first detected.

She said a vaccine was “optimistically 12 to 18 months away."

“Science is just half the battle,” Sridhar said in an email to The Associated Press. “The other half is manufacturing enough doses and getting these into people across the world. How would prioritisation be done?"

She asked who would get the vaccine first, health workers, those working with the vulnerable or the elderly, or the elderly themselves. Sridhar said it was unclear how young, strong, Olympic athletes would “fit” into the “priority process.”

“I’m sure there is going to be some innovative thinking about how to combine safety of athletes, their coaches and teams, with the awareness that sports play a crucial role for the world — for economic reasons, but also socially,” she said.

Masa Takaya, a spokesman for the Tokyo Olympics, said he was aware of the comments from the head of the Japan Medical Association.

“We understand there are a variety of insights, opinions around the possibility of hosting the games next year,” Takaya said. “Some medical experts are also expressing that it is too early to made a judgment."

There will a push from many quarters to hold the Olympics next year — vaccine or no vaccine, fans or no fans.

“This is placing tremendous pressure on all involved to devise an acceptable, rather than optimal solution,” David Carter, who teaches sports business at the University of Southern California, said in an email to the AP. “Add to this the unwavering importance the IOC places on its brand, and the uncertainty in terms of public health and you find yourself with international sports’ version of a Rubik’s cube.”

The IOC depends on selling broadcast right for 73% of its income. Another 18% is from sponsors. The IOC has only two major events to sell, and broadcasters don't pay much of their fee until the Olympics are aired.

Japan has officially spent $12.6 billion to organise the Olympics, and a national audit office says the real figure is at last twice that large. Media estimates in Japan say the cost of the delay will be $2 billion to $6 billion.

Add to this 11,000 Olympic athletes, and 4,400 Paralympians. The vast majority get only one shot at the games.

And then there are the sponsors.

Tokyo has also sold millions of tickets. It's unclear what will happen if the Olympics are held without fans. The tickets carry a force majeure clause, which may permit organisers to avoid refunds.

The Los Angeles-based consultant worked with the Tokyo bid committee but is no longer involved with Tokyo.

“It will probably have significant impacts on the way we organize events and the way we deliver them. This is not just about Tokyo," Arnot said. “This is about the world of mega-events. This virus has changed the way we look at these events. Sport wants to be a responsible member of the world community."

Tokyo Olympics, IOC conflict over who pays for postponement