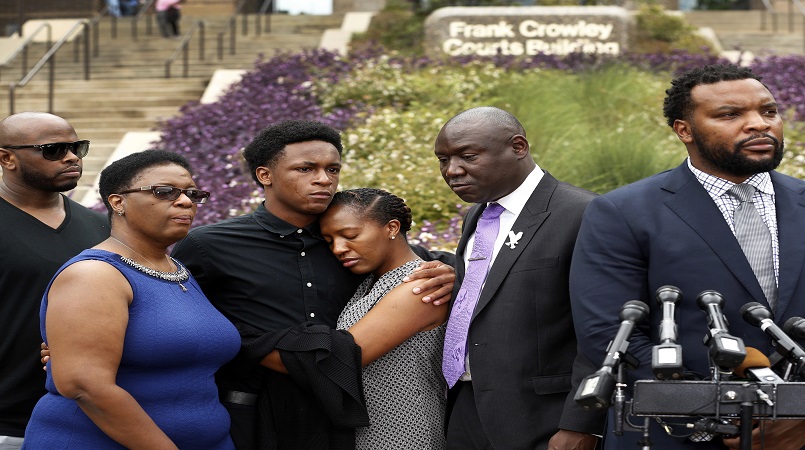 Lawyers for the Jean family issued a press release reacting to the news of Officer Amber Guyger's firing earlier today.

Guyger fatally shot Botham Jean in his own apartment on September 9th. The release is printed in full below:

"Dallas Police Chief Renee Hall participated in a conference call with Attorneys Lee Merritt, Ben Crump and Daryl Washington, along with the parents of Botham Jean, Allison and Bertram Jean, on Sunday afternoon. During this call the Chief announced her intent to fire Amber Guyger and offered an explanation for the delay in this action.

Specifically, she explained that a premature administrative suspension could have possibly implicated Guyger’s fifth amendment protections and compromised the criminal prosecution. The Jean family expressed satisfaction in this explanation and in Guyger’s termination. We see it as an initial victory— well received on the day Botham Jean is laid to rest in his native country in St. Lucia. However, we are committed to seeing through the next steps of the process of a proper murder indictment, conviction and appropriate sentencing. Our office continues to conduct its parallel investigation into this matter as we prepare a 1983 civil rights action against Guyger and the City of Dallas for the wrongful death of Botham Jean.

The Jean family attorneys released the following statement today in regards to the termination of Dallas Police Officer Amber Guyger, the officer who has been charged with manslaughter in the shooting of Botham Jean:

"As Botham Shem Jean's family has his homegoing service in St. Lucia this week, this announcement of Amber Guyger's termination from the Dallas Police Department is bittersweet for Botham's family. While nothing can bring him back, DPD's firing of Guyger is the first step towards justice for Botham Shem Jean."

In the #RoyOliver trial the defense team attempted to throw out the murder charges completely alleging the termination decision came to soon and the administrative investigation tainted the criminal prosecution. https://t.co/q4Gj1yShEz