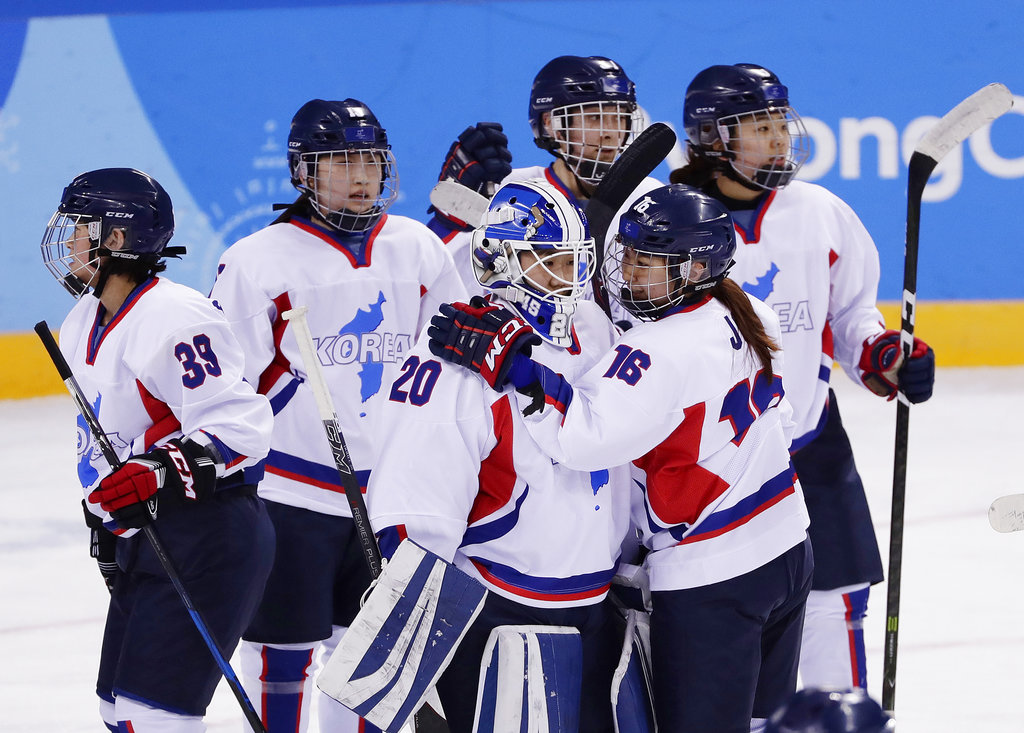 They cheered. They cried. They hugged. They watched as fans by the thousands shouted, "We are one." Unification flags for the two Koreas, longtime rivals and sometimes bitter enemies, flapped across the Olympic arena.

And now they go back home, quite possibly never to see each other again.

The Korean women's hockey team, which included players from both North and South, ended its historic Olympic run on Tuesday with a fifth straight loss but a host of unforgettable feel-good sparks.

Team Korea was defeated by Sweden 6-1 in a seventh-place match in the Pyeongchang Games on Tuesday, a healthy crowd again on hand to cheer them on.

The team lost by a combined score of 28-2 in its games and was rarely competitive. Yet the repeated defeats were, for many, insignificant. Instead, this notion dominated discussion: the significance of the Koreas' first-ever joint Olympic squad taking the ice smack in the middle of an abrupt, now ongoing reconciliation between the rival Koreas.

"They are an amazing group," said the team's Canadian coach, Sarah Murray, who wept while hugging some of her squad.

"I could have never imagined our players being this competitive in the Olympics," Murray said after the game. "So when I was standing there I was just so proud of them, just watching them skate around and salute the fans."

South Korean forward Kim Heewon wiped away tears as she and teammates waved to cheering fans during a standing ovation. Some spectators wept as Korean players — North and South — stood in a circle at the center of the rink and hit the ice with their sticks in a post-game ceremony before leaving the rink.

"It's been a special opportunity to get to know those girls, and we'll miss having them around," said player Randi Heesoo Griffin of Cary, North Carolina, whose mother is South Korean.

The two governments bar their citizens from visiting each other's country and exchanging phone calls, letters and emails. Griffin said she understood that when it came to staying in touch, "there's some barriers to that, obviously."

"I mean, none of them have Facebook, so might be hard," Griffin said. "But there were definitely bonds that were formed. And I think if we end up playing against each other again, South Korea vs. North Korea, there's definitely going to be some hugs and some smiles."

The team was formed just days before the Pyeongchang Games began during an eleventh-hour push by the two Koreas to improve ties after a year of spiking nuclear tensions that triggered fears of a war on the Korean Peninsula.

The team's makeup was a key part of agreements the Koreas struck to cooperate in the Olympics, which eventually provided a breather from a nuclear standoff involving the North, the South and the United States.

Despite initial worries about their teamwork, North and South Korean players were seen getting along with each other. There were many small moments of warm relations that seemed to improve as the games went on.

The Koreas' improving performances were likely because players gradually got over nervousness and pressures from the spotlight.

Every minor interaction between North and South Korean players was in the news because it was so extraordinary. They took selfies, visited a beach and created a dictionary to overcome the North-South dialect divide.

"We have really enjoyed working with the North's players and coaches and we really do want to help them in the future," Murray said. She said a possible "exchange game" has been discussed to maintain the connection.

"They want to get better, they want to keep learning from us and we want to help them," she said. "And there are things that we can learn from them, too."

The team's formation raised hopes that Olympics-related warming gestures could transcend beyond sports and contribute to easing nuclear tensions.

But it is unclear if the good mood will last after the Olympics end, particularly since Seoul and Washington are set to kick off delayed springtime military drills that Pyongyang views as a rehearsal for invasion.

Joo Moon-sook, a 43-year-old who attended the game Tuesday with her husband and 12-year-old daughter, said the joint team's Olympic appearance has helped soften South Koreans' hawkish views on North Korean people after years of animosity.

"It's an educational experience for children, letting them see for themselves that North Koreans aren't scary and bad people, but part of who we are as a nation," Joo said. "I can't forget the first game — the moment they stepped onto the ice. I was choking with tears."

For now, the team will remain in South Korea until the closing ceremony — not practicing, but continuing video meetings until the weekend and, presumably, going over good memories. For South Korean goalie Shin So Jung, the opportunity to experience such a moment from the inside — and appreciate it while it was happening — was unforgettable.

"Our win-loss record isn't good, but I hope we brought them joy and heartfelt moments," Shin said. "I don't think I will experience anything like this again. So many people came here to see us and cheer for us. I hope their love for us lasts."

Who are North Korea's "robotic' cheerleaders?