Judge: Cardi B must not contact strip club melee victims 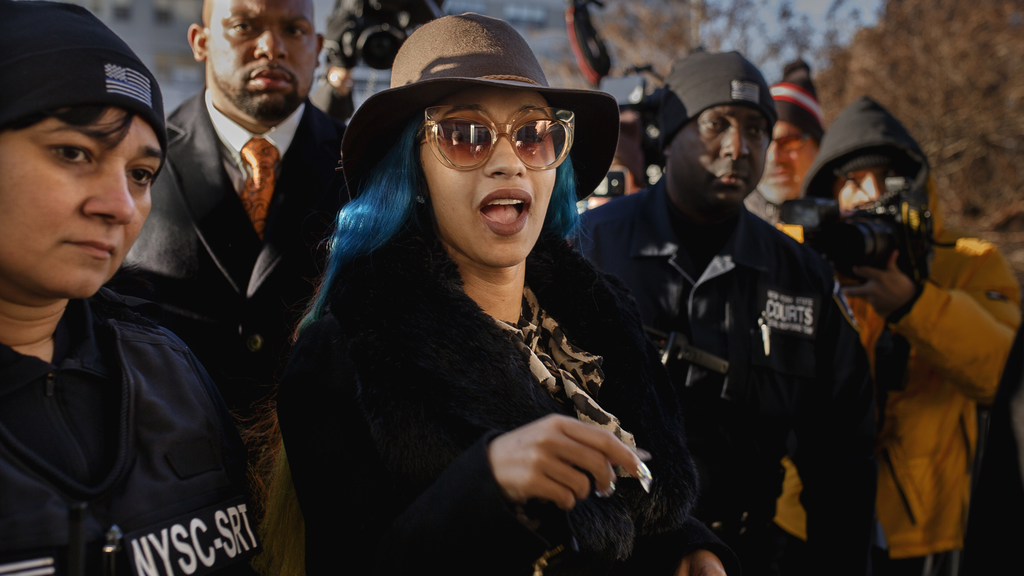 Cardi B must not contact, in person or through social media, the victims of a melee she was involved in at a New York strip club, a judge ordered Friday.

The platinum rapper appeared in court in New York City after a summons was issued Oct. 1 for misdemeanor reckless endangerment and assault.

Her lawyer has said she didn't harm anybody.

Police said Cardi B and her entourage were at the club around 3 a.m. when she argued with a 23-year-old bartender. They say a fight broke out during which chairs, bottles and hookah pipes were thrown, slightly injuring the woman and another employee.

Cardi B's "Invasion of Privacy" is among the nominees announced Friday for the 2019 Grammy Awards' album of the year. The 26-year-old scored a total of five nominations.

She appeared in court wearing long rainbow hair and Christian Louboutin boots — the "red bottoms" she bragged about in her hit "Bodak Yellow" — along with a floppy hat and a fur-trimmed jacket. She did not speak as she left the courthouse amid a mad media scramble and got into a black Escalade with darkened windows.

Queens Assistant District Attorney Ryan Nicolosi asked for bail of $2,500, "as the defendant appears to come when it's most convenient for her," a reference to a previous missed court appearance. The judge declined to set bail. Her next court date is Jan. 31.

Investigators were exploring whether the fracas involved a romantic dispute.

Cardi B, whose real name is Belcalis Almanzar, said recently on Instagram that things weren't working out between her and fellow rapper Offset, though they're still good friends and business partners. The couple got married in September 2017 and welcomed a baby girl in July.

The strip club incident occurred about three weeks after Cardi B and Nicki Minaj were involved in an altercation that got physical at a New York Fashion Week party.

Video that circulated on social media showed Cardi B lunging toward someone and being held back at the Harper's Bazaar Icons party. Another video showed Cardi B being escorted out of the event by security.

Cardi B, her feet bare beneath a voluminous red Dolce & Gabbana gown, was seen leaving the party with what appeared to be a bump on her head.

Watch: Cardi B hands out free winter coats in NYC

Finally! Cardi B shares a photo of baby Kulture