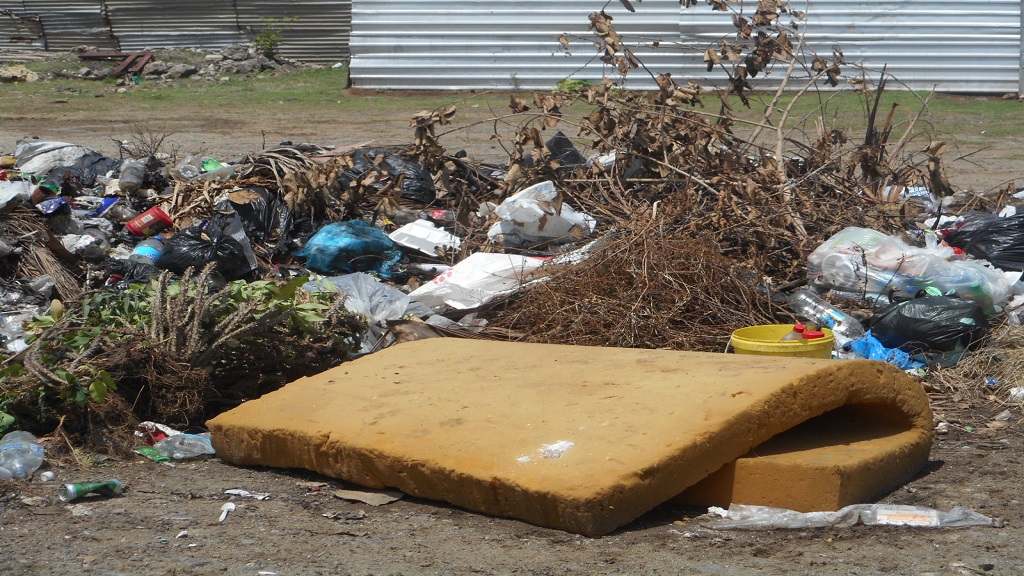 The lack of a reliable garbage disposal system, coupled with the indiscriminate dumping of garbage in certain parts of the town of Vieux-Fort, is making life uncomfortable for residents.

According to the concerned residents, the garbage exudes an obnoxious smell, which sometimes becomes unbearable and creates an eyesore in the neighbourhood.

The most affected areas are Bacaderre, Bruceville and New Dock Road.

The residents say it has been over two weeks since garbage trucks have passed to collect the rubbish in those areas. According to them, whenever skip bins are placed there, most times they are allowed to overflow before they are emptied.

Loop News visited the Bacaderre area today, where a pile of garbage was indeed malodorous.

The situation has been compounded by an inadequate number of bins to serve the entire town. Some years ago, there were ten bins in the town, but recently there has been only three.

The situation has incensed residents, who last week burned the rubbish in a bin at Bacaderre, which had been overflowing for over a week.

Winston Lubin, a resident of the town of Vieux-Fort, told Loop News that the problem is annoying and requires immediate attention.

Jean Samuel, who owns a small business less than 40 meters from where the rubbish is dumped at Bacaderre, said the problem affects her customers. “My customers have to cope with the unbearable smell which comes from the rubbish nearby,” she said.

She lamented that although persons in the area see the bin is filled, they still dump rubbish, including fish guts, next to the bin.

David Charles, another resident of the area who also owns a small business not too far from where the rubbish is dumped, said: “Whenever the wind is strong the smell becomes unbearable…”

He said because of the unpleasant situation, he no longer dumps his rubbish in the area.

Charles is now making a clarion call to the relevant authority to address the garbage problem in the community.

David Mentor said it does not seem anyone in authority cares about the health of the residents of Vieux-Fort. “The problem is killing us slowly. Your health is your wealth,” he said.

The situation has sanitation workers of the Vieux-Fort South Constituency Council busy and annoyed.

Kent Richards, a sanitation worker of the council said its time the garbage problem in Vieux-Fort be addressed, adding that it is affecting the entire community.

Commenting on the situation, the mayor of Vieux-Fort, Orricia Denbow-Bullen, said the council is trying its best to deal with the problem.

She said the council has no control over the work of the company hired to dispose garbage in Vieux-Fort, adding that it was hired by the Saint Lucia Solid Waste Management Authority.

Officials of the authority could not be reached for comments on the matter.

Bajans should be ashamed as tourist shares photo of garbage