The Latest: 3 arrested in death of pregnant Chicago woman 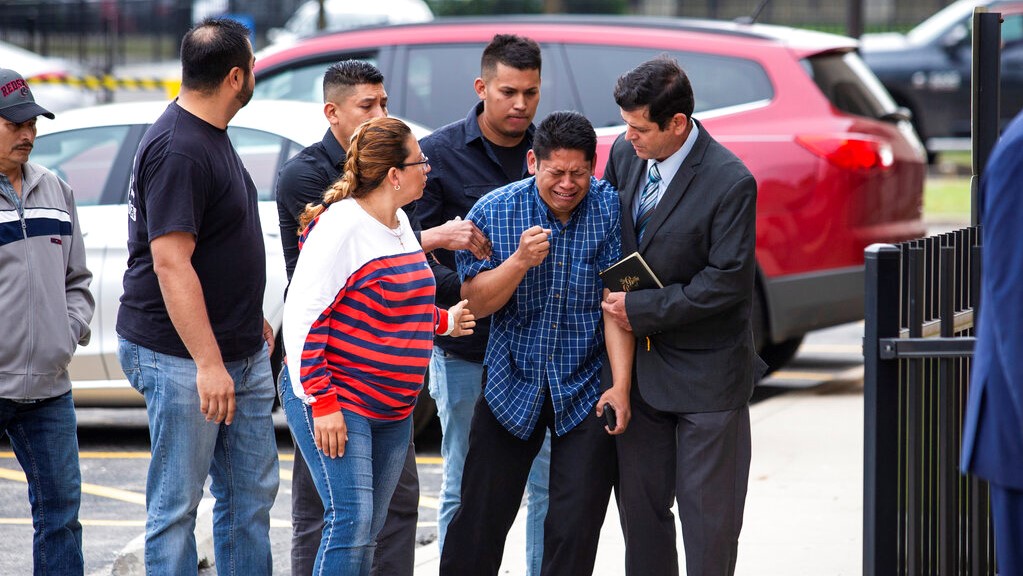 Arnulfo Ochoa, the father of Marlen Ochoa-Lopez, is surrounded by family members and supporters, as he walks into the Cook County medical examiner's office to identify his daughter's body, Thursday, May 16, 2019 in Chicago. (Ashlee Rezin/Chicago Sun-Times via AP)

The Latest on the slaying of a pregnant Chicago woman whose baby was cut from her womb (all times local):

Chicago Police say the woman who was strangled before her unborn son was cut from her womb had bought baby clothes from her alleged killer before the day she died.

At a Thursday news conference announcing first-degree murder charges against 46-year-old Clarisa Figueroa and her 24-year-old daughter, Desiree Figueroa, police said that 19-year-old Marlen Ochoa-Lopez was returning to the Figueroa house after the mother posted an offer of free baby clothes on a Facebook chat room.

They say that the daughter has confessed to helping her mother kill Ochoa-Lopez and that the mother's boyfriend, 40-year-old Piotr Bobak, is charged with concealment of a homicide

Police say the investigation is continuing but that Clarisa Figueroa's adult son died of natural causes two years ago and they believe the woman was hoping to raise the newborn as her own.

The woman called police April 23 hours after Ochoa-Lopez was killed to report the baby had stopped breathing. The child that Figueroa said was hers was rushed to an area hospital where he remains in grave condition and is not expected to survive.

Three people have been arrested in connection with the death of a pregnant Chicago woman, who was strangled before her baby was cut from her womb.

Chicago police took the three into custody shortly before the body of Marlen Ochoa-Lopez was discovered behind a home on the city's Southwest Side. Authorities were to release the names of those arrested later Thursday.

Ochoa-Lopez was nine months pregnant when she disappeared April 23. Police and family say she had gone to a home in response to a Facebook offer of free baby clothes.

Authorities say that the same day Ochoa-Lopez vanished, a 46-year-old woman called 911 about a baby in distress. The baby isn't expected to survive.

Relatives of the woman who was strangled before her unborn baby was cut from her womb are expressing relief that their nearly four-week wait for answers is over.

On Thursday, outside the Chicago medical examiner's office that holds the remains of 19-year-old Marlen Ochoa-Lopez, her father told reporters in Spanish through an interpreter: "Even though we found her without a life, at least we're grateful that we found her."

The baby is hospitalized in grave condition.

Ochoa-Lopez's husband, Yiovanni Lopez, says he understands that his son is expected to die soon. But he prayed for a miracle for the newborn.

Police believe Ochoa-Lopez was killed after she went to a house in response to an offer of free baby clothes. Three people are in custody.

A spokeswoman for the family of a Chicago woman who was strangled and had her baby cut from her womb says DNA tests led police to conclude the woman claiming to be the baby's mother was lying.

Sara Walker says detectives tested the saliva of the baby and that of the baby's father along with hair samples taken from the home of 19-year-old Marlen Ochoa-Lopez to determine parentage. Ochoa-Lopez's body was discovered Wednesday, three weeks after she disappeared.

Authorities say that the same day Ochoa-Lopez vanished, a 46-year-old woman called 911 about a baby in distress. That woman has been taken into custody, as have two other people. Charges are expected to be filed Thursday afternoon.

Police say the baby is hospitalized in grave condition and is not expected to survive.

Police initially identified the victim as Marlen Ochoa-Uriostegui, but the family has since said she had been using her husband's last name.

A Chicago police spokesman says a baby isn't expected to survive after being ripped from his mother's womb after she was strangled.

Anthony Guglielmi says three people are in custody and charges including murder are pending.

Authorities say the woman, 19-year-old Marlen Ochoa-Uriostegui, had gone to a Chicago home in response to a Facebook offer of free clothes.

The nine-months-pregnant Ochoa-Uriostegui was last seen leaving a high school on April 23. That was the same day paramedics were called to the home on the Southwest Side about a newborn with problems breathing.

Guglielmi is calling it an "unspeakable act of violence."

A body found behind a home on Chicago's Southwest Side has been identified as that of a 19-year-old pregnant woman who disappeared last month.

The Cook County medical examiner's office says the body of Marlen Ochoa-Uriostegui was discovered after several people were taken into custody at the home. No charges against those in custody have been announced.

The medical examiner announced Wednesday Ochoa-Uriostegui died of ligature strangulation, and her death is considered a homicide.

Ochoa-Uriostegui was nine months pregnant when she disappeared April 23 after leaving her high school. Authorities haven't said a body of an infant has been found.

However, Chicago Fire Department spokesman Larry Merritt tells the Chicago Tribune paramedics were called to the home for a newborn with problems breathing on the same day the woman disappeared.

Watch: Thai baby in walker killed after rolling into path of lorry

Tell Us More: Allidona George of Make Up With Alli

Tell Us More: Allidona George of Make Up With Alli