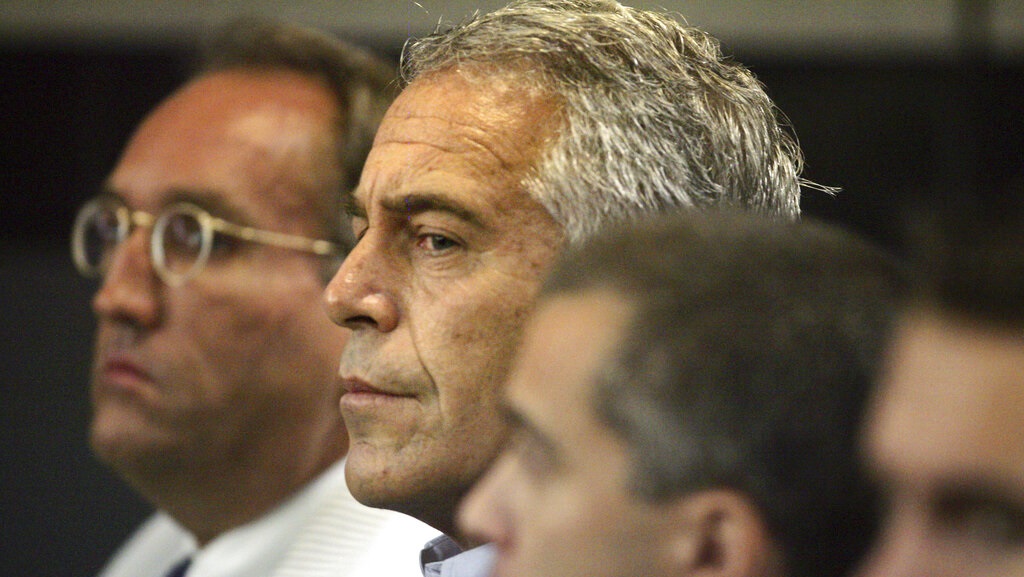 The Latest on the aftermath of Jeffrey Epstein's death (all times local):

A person familiar with the probe of Jeffrey Epstein's death at a federal jail says guards are suspected of falsifying log entries to show they were checking on inmates in his unit every half hour, when they actually weren't.

Epstein is believed to have killed himself early Saturday at the Metropolitan Correctional Center in New York, where he was awaiting trial in a sex trafficking case.

Surveillance video reviewed after the death showed guards never made some of the checks noted in the log, according to the person familiar with the investigation.

The person wasn't authorized to disclose information and spoke to The Associated Press Tuesday on condition of anonymity.

The Justice Department said earlier Tuesday that two guards assigned to watch Epstein had been placed on administrative leave.

The federal Bureau of Prisons has sent a suicide reconstruction team to the jail where Jeffrey Epstein took his own life to analyze how and why it happened.

That's according to a Justice Department official who spoke to The Associated Press on Tuesday. The person wasn't authorized to discuss the matter publicly and spoke to the AP on condition of anonymity.

The official said the team of psychologists arrived Tuesday at the Metropolitan Correctional Center in New York. They are expected to reconstruct the scene, analyze why Epstein took his own life and look at how it happened.

The FBI and the Justice Department's inspector general are investigating Epstein's death. The official says Deputy Attorney General Jeffrey Rosen is being briefed by the FBI every three hours.

The Justice Department says two guards assigned to watch Jeffrey Epstein when he killed himself in jail have been placed on administrative leave.

The department says in a statement Tuesday that the warden at the Metropolitan Correctional Center has also been temporarily reassigned to an office post pending the outcome of two investigations. Both the FBI and the Justice Department's inspector general are investigating Epstein's death.

Attorney General William Barr has expressed outrage that Epstein was able to take his own life Saturday while under the care of the federal Bureau of Prisons while the inmate was facing sex trafficking charges.

The Justice Department says the warden of another facility in upstate New York has been named the acting warden at MCC. The Department says it will take additional personnel action as warranted.

A member of the Senate Judiciary Committee says the Justice Department should "rip up" a decade-old plea agreement that protects some of Jeffrey Epstein's associates from being prosecuted for their alleged role in supplying him with teenage girls.

The 2008 deal allowed Epstein to avoid a lengthy prison sentence by pleading guilty to lesser state charges. It also shields several of his associates from prosecution.

Federal prosecutors said when they charged Epstein that the Florida deal doesn't apply to prosecutors in New York.

A Justice Department official who spoke on the condition of anonymity says Barr has recused himself from any review of the 2008 plea deal involved in the federal investigation into Epstein.

Amid revelations about Jeffrey Epstein's death, authorities have intensified inquiries into what went wrong at the jail and who could still face charges in his case.

A person familiar with the matter says Epstein was supposed to have been checked on by a guard about every 30 minutes. But investigators have learned those checks weren't done for several hours before Epstein was found Saturday.

That person wasn't authorized to discuss the matter publicly and spoke on condition of anonymity.

Additionally, Serene Gregg, president of the American Federation of Government Employees Local 3148, tells The Washington Post that one of the guards assigned to Epstein's unit wasn't a correctional officer, but a fill-in who had been pressed into service.

In the criminal case, authorities are seemingly turning their attention to those who knew about Epstein's penchant for underage girls.

Autopsy of Epstein performed, but details yet to be released