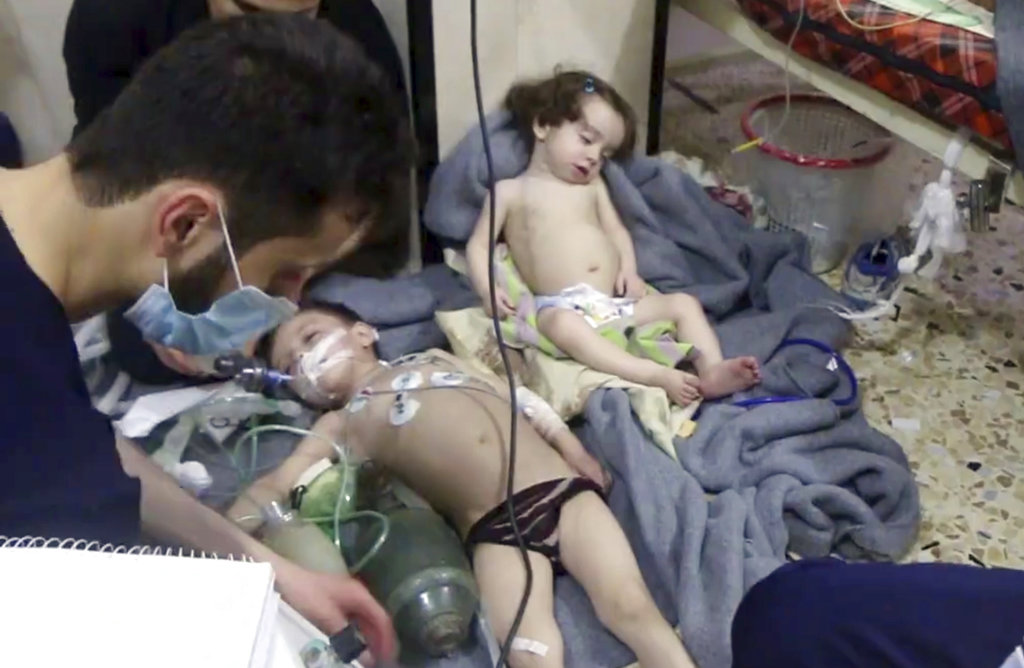 This image made from video released by the Syrian Civil Defense White Helmets, which has been authenticated based on its contents and other AP reporting, shows medical workers treating toddlers following an alleged poison gas attack in the opposition-held town of Douma, in eastern Ghouta, near Damascus, Syria. (Syrian Civil Defense White Helmets via AP)

The Latest on the situation on Syria (all times local):

The European Union is squarely laying the blame for the suspected poison gas attack with Syrian President Bashar Assad's government.

EU spokeswoman Maja Kocijancic said that over the weekend and early Monday as the reports came in of another atrocity in Syria, the EU "learned from several sources" to shape its conviction "that it is the Syrian regime which is responsible" when it comes to the suspected chemical attack.

The EU appealed in a statement on Sunday that Assad allies Russia and Iran "use their influence to prevent any further attack and ensure the cessation of hostilities and de-escalation of violence" as agree under a U.N. resolution.

The Lebanese army says four Israeli warplanes violated Lebanon's air space, flying from the Mediterranean Sea over the coastal town of Jounieh and then heading east, toward the city of Baalbek near the Syrian border.

A statement from the Lebanese Armed Forces says the warplanes stayed in Lebanese airspace for about 10 minutes, starting at 3:25 a.m. on Monday before leaving it.

The army did not say whether the warplanes carried out the airstrikes on Syria's T4 air base earlier in the day in central Syria.

Russian and Syrian military officials have blamed Israel, saying Israeli warplanes struck the T4 air base while in Lebanese airspace in the early hours of Monday.

Turkey attacked Afrin in March to drive out the Kurdish militia, known as the YPG, which forms the backbone of the Syrian Democratic Forces, America's main partner in Syria.

Lavrov spoke to reporters on Monday.

He insisted that the Turkish president, Recep Tayyip Erdogan, had "never said that Turkey wants to occupy Afrin" and that Russia now expects Turkey to bring the area under Syrian government control.

Hundreds of Syrians have poured into the main square of the country's largest city, Aleppo, to celebrate the surrender of opposition fighters near the capital of Damascus.

Men, women and children gathered in Saadallah al-Jabri's Square in the northern city, waving Syrian flags and saying they came to celebrate "victories of the Syrian army."

The rebels' defeat in eastern suburbs of Damascus is the biggest victory for the President Bashar Assad since December 2016, when government forces and their allies regained control of rebel-held eastern neighborhoods of Aleppo.

In Damascus, many residents celebrated throughout the night, with some shooting in the air.

Thousands of rebels and their families have agreed to leave the town of Douma, the last rebel-held area east of Damascus.

Russia's foreign minister has called reports of a suspected poison gas attack in Syria a "provocation."

Syrian opposition activists and local rescuers said on Sunday that the suspected attack from the previous day against the last remaining foothold of the rebels in the eastern suburbs of Damascus killed at least 40 people.

Russia earlier managed to negotiate with the rebels an evacuation from that area.

Russian Foreign Minister Sergey Lavrov on Monday rejected the reports of the attack, calling it a "provocation." He said the Russian military visited the site of the suspected attack and found no traces of the chemicals.

The Russian military says the Israeli Air Force was behind the airstrike in Syria and had launched eight missiles on a Syrian air base.

A Syrian military official also says Israel was behind the attack.

Russia's Defense Ministry says two Israeli fighter jets launched the attack on the T4 air base in central Syria from Lebanon's air space in the early hours on Monday.

The ministry says Syria shot down five out of the eight missiles that targeted the base. It says the other three landed in the western part of the T4 base.

Syrian state media are saying that dozens of civilians who had been held for years by a rebel group near the capital of Damascus have been set free.

The state SANA news agency says the people were freed around midnight on Sunday. It says they had been held by the Army of Islam group since 2013.

Their release is part of a newly reached deal in which thousands of Army of Islam fighters and their relative will be allowed to leave the town of Douma and head to rebel-held part in northern Syria.

SANA released pictures of men, women and children waving from buses shortly after they crossed into government-controlled areas on the edge of Douma.

The Army of Islam is holding thousands of people in the Tawba prison that they run inside Douma.

A Syrian war-monitoring group says 14 people, including Iranians, were killed in a missile attack early in the morning on an air base in central Syria.

Rami Abdurrahman, who heads the Britain-based Syrian Observatory for Human Rights, says most of the 14 killed were either Iranians or members of Iran-backed groups.

Syria's state-run news agency earlier reported that missiles struck the T4 air base early on Monday. It said the attack left people dead and wounded. Although the agency said it was likely "an American aggression," U.S. officials said the United States had not launched any airstrikes on Syria.

Al-Manar TV station of Lebanon's Iran-backed Hezbollah group, which is fighting in Syria alongside the government forces, described the attack as an "Israeli aggression."

The Observatory says it wasn't immediately clear who was behind the attack.

Syria's state news agency says missiles have struck an air base in central Syria in the early hours of the day.

The agency said it was likely "an American aggression" but U.S. officials say the United States had not launched airstrikes on Syria.

Monday's missile attack followed a suspected poison gas attack on Saturday on the last remaining foothold for the Syrian opposition in the eastern suburbs of Damascus. At least 40 people were killed, including families found in their homes and shelters, according to opposition activists and local rescuers.

SANA reported that the missile attack on the T4 military air base in Homs province resulted in a number of casualties.

The U.N. Security Council planned to hold an emergency meeting Monday to discuss the chemical attack.

WATCH: Dr Phillip Coombs answers: Can you get Covid-19 twice?