The Latest: EU warns firms to get ready for no-deal Brexit 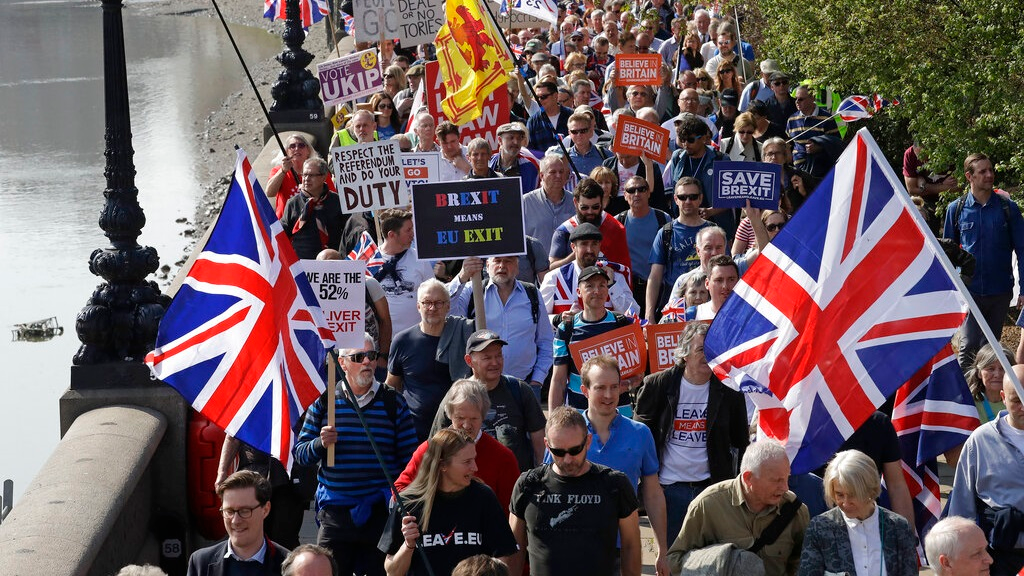 LONDON (AP) — The Latest on Britain's bid to leave the European Union (all times local):

The European Union is warning businesses and people likely to be hit by Brexit to make sure they are prepared for the possibility that Britain might leave the bloc without an agreement at the end of next month.

The EU's executive arm, the European Commission, on Wednesday released a checklist for companies to use to help minimize expected disruptions to trade after Britain departs on Oct 31.

The commission says EU funds set up to respond to natural disasters and help people whose jobs are hit by major changes in world trade should be used to help businesses, workers and countries hardest hit by any no-deal.

A total of 780 million euros ($860 million) would be available if the EU parliament and member countries endorse the move. Britain would have no access to the money.

The German government is leaving open the question of whether it would support another delay to Britain's departure from the European Union.

It is standing by Chancellor Angela Merkel's previous comments that the two sides can still work toward a deal by the Oct. 31 deadline "if the will is there is both sides."

Merkel's spokesman, Steffen Seibert, refused to comment directly on the latest goings-on in Britain's Parliament, where opponents of Prime Minister Boris Johnson are trying to prevent a no-deal Brexit at the end of next month. Seibert said it would be up to Britain to request any delay, "and if it happened again, the EU would address it."

Johnson hasn't yet been to Brussels as prime minister but did visit Berlin and Paris last month.

Seibert said Merkel's comments about the possibility of a deal stand, "but it is also clear that this is about Britain putting concrete and realistic proposals on the table in Brussels."

The European Union says it is still awaiting proposals from Britain to break the Brexit deadlock as technical talks aimed at ending the impasse get underway in Brussels.

European Commission spokeswoman Mina Andreeva said "there is nothing new" in terms of new ideas from London.

Andreeva says "we are willing to work constructively with Prime Minister (Boris) Johnson and to look at any concrete proposals that he may have as long as they are compatible with the withdrawal agreement."

Britain's Brexit envoy David Frost is in Brussels for technical talks with EU counterparts to see whether progress can be made.

Britain wants to remove the so-called backstop arrangement aimed at keeping goods flowing smoothly between EU member Ireland and Northern Ireland in the U.K. after Brexit from the legally-binding divorce agreement. The EU insists it must remain.

The closely watched decision was revealed Wednesday. It is the first of several challenges to Johnson's maneuver that gives lawmakers little time to prevent Britain from crashing out of the European Union without an agreement on Oct. 31.

Transparency campaigner Gina Miller, who won a ruling in the Supreme Court in 2017 that stopped the government from triggering the countdown to Brexit without a vote in Parliament, has another legal challenge in the works.

A human rights campaigner has also sued in Northern Ireland, arguing that the historic Good Friday accord that brought peace is in jeopardy because of Johnson's actions.

Britain's Parliament will attempt to defy Prime Minister Boris Johnson's Brexit plans on Wednesday as lawmakers seek a way out of the impasse that has gripped the nation since the 2016 vote to leave the European Union.

The House of Commons is confronting Johnson over his insistence that the U.K. leave the EU on Oct. 31 even without a withdrawal agreement to cushion the economic blow. On Wednesday, it will consider a measure that will try to block a departure without a deal.

Johnson has said he will seek a general election if the lawmakers succeed, taking his message directly to the people in his bid to deliver Brexit, come what may.

But it is unclear whether he will have the votes for such a move.  On Tuesday, Johnson lost his first vote in Parliament since becoming prime minister in July and has seen his tenuous grip on power weakened by defections from his party that cost him his working majority.