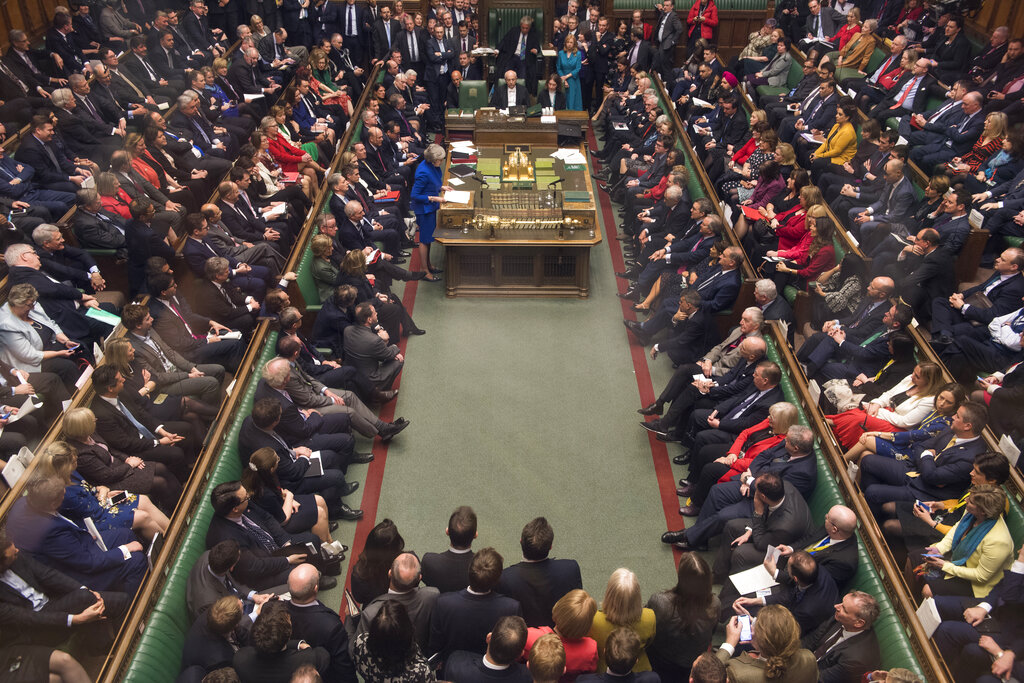 Britain's Prime Minister Theresa May, centre left, speaks in the House of Commons, after MPs rejected a no-confidence vote against the government, in London, Wednesday Jan. 16, 2019. (Mark Duffy, UK Parliament via AP)

The Latest on Brexit (all times local):

Britain's main opposition leader says Prime Minister Theresa May's offer of cross-party talks on a new Brexit deal is a "stunt" because she will not rule out leaving the European Union without an agreement.

Labour Party leader Jeremy Corbyn is refusing to meet May until she takes no-deal "off the table."

After May's EU divorce deal was resoundingly rejected by Parliament, she said she would talk to opposition leaders and other lawmakers in a bid to find consensus on a new plan.

But Corbyn said that May has shown no sign of lifting her "red lines," which include leaving the EU's customs union and single market.

Corbyn said in a speech Thursday that May "seems prepared to send the country hurtling toward a cliff-edge." He told her to "ditch the red lines and get serious about proposals for the future."

The British Parliament expects to vote on Brexit again on Jan. 29 following extended debate on the government's plans and possible amendments.

Leader of the House of Commons Andrea Leadsom told Parliament Thursday that the date has been set aside for a full day of debate and voting.

Prime Minister Theresa May plans to return to Parliament on Monday to present her revised Brexit plan following the crushing defeat of her withdrawal plan.

She will announce her "Plan B" after meeting with a variety of opposition parties in the coming days with the goal of finding some sort of consensus.

Main opposition leader Jeremy Corbyn of the Labour Party has thus far declined to meet with the prime minister.

The European Union's Brexit negotiator says he hopes British Prime Minister Theresa May's consultations with national political leaders can help break the deadlock over the terms of the U.K.'s departure from the EU and herald "a new stage" in Brexit negotiations.

Michel Barnier said Thursday that "getting an agreement is in everybody's interest" and that "something has to change" to secure a divorce deal.

Barnier told Portuguese lawmakers during a visit to Lisbon that in the absence of an agreement, negotiations between the U.K. and EU on contingency measures to prevent the breakdown of common infrastructure won't take place in "a climate of confidence."

Barnier says he hasn't spoken about the possibility of postponing Brexit because the March 29 departure date was chosen by Britain and is written into U.K. law.

France's government is kicking off a 50 million-euro (about $57 million) plan to prepare for the increasingly likely possibility that Britain will leave the European Union on March 29 without a plan.

He said the plan also includes money for airports and ports, which are "most concerned" by the prospect of a so-called hard Brexit.

He said "we strongly believe" Britain will leave with no exit deal, notably after the British parliament this week overwhelmingly rejected a divorce agreement worked out with the EU.

France's parliament approved a special law this week allowing for the government to impose emergency measures to deal with a no-deal Brexit.

The European Union's Brexit negotiator says the U.K.'s so-called red lines on how much ground it is willing to give in negotiations for its departure from the EU have "shut doors" to a broader agreement.

He told lawmakers in Lisbon, Portugal that the withdrawal agreement is "balanced, respectful," adding that the EU hadn't reached such an "ambitious" agreement with any other non-EU country.

In general, EU negotiators have found Britain to be inflexible in its desire to retain some of the economic advantages of trading freely with the bloc's countries while ending the free movement of European citizens into Britain and abiding by other EU guiding principles.

Barnier was in Lisbon on a longstanding invitation to meet with local officials.

Barnier said Wednesday in Strasbourg that he was more concerned than ever about the possibility of Britain leaving the EU without an agreement following Tuesday's parliamentary defeat for Prime Minister Theresa May's divorce deal.

France's prime minister is a holding a special government meeting on how his country will cope with a possible "no-deal" Brexit.

The French parliament adopted a law Wednesday allowing emergency measures after March 30 in the event Britain leaves without a deal.

Such measures could aim to reduce problems in cross-border trade and transport, notably through the Eurotunnel beneath the English Channel, and allow British workers and retirees based in France temporary permission to stay until a longer-term deal is worked out.

British Prime Minister Theresa May is reaching out to opposition parties and other lawmakers in a battle to keep Brexit on track after surviving a no-confidence vote.

European Union countries are also debating Thursday on how to move forward now that the U.K. Parliament has rejected May's Brexit deal with the bloc and with the March 29 exit date looming.

Parliament overwhelmingly rejected the deal on Tuesday night, in a crushing defeat for May. Opposition leader Jeremy Corbyn immediately called for a no-confidence vote, but May's government survived it on Wednesday night.

May invited opposition leaders for talks about how to secure another Brexit deal and avoid leaving the EU without a deal. But Corbyn has declined unless May takes the "no-deal" possibility off the table.