The Latest: Mozambique death toll jumps to 38 after cyclone 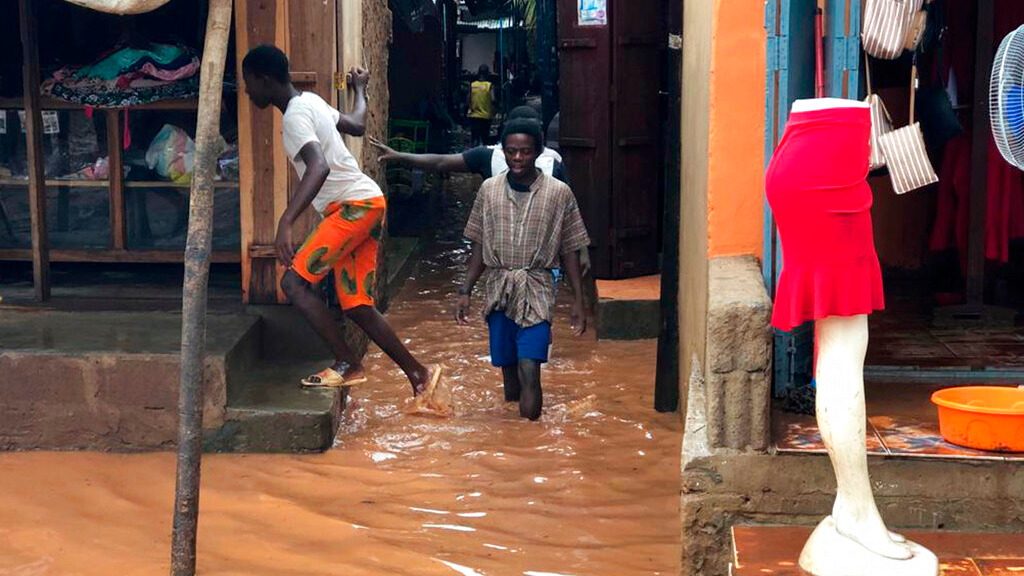 People walk through a flooded path leading to a shop during floods due to heavy rain in Pemba, Mozambique, Sunday , April 28, 2019. Serious flooding began on Sunday in parts of northern Mozambique that were hit by Cyclone Kenneth three days ago, with waters waist-high in areas, after the government urged many people to immediately seek higher ground. Hundreds of thousands of people were at risk. (AP Photo/Tsvangirayi Mukwazhi)

The Latest on Cyclone Kenneth in Mozambique (all times local):

The new toll was announced Monday as heavy rains continued to hamper efforts to deliver food and shelter to badly hit communities. More rain is forecast in the days ahead.

Kenneth roared into northern Mozambique on Thursday, just six weeks after Cyclone Idai struck the central part of the country. Flooding caused most of the more than 600 deaths that followed.

Now aid workers say they have an "awful sense of deja vu" after Kenneth as flood waters rise.

Rains from Cyclone Kenneth, the second tropical storm to hit Mozambique within weeks, continued to pound the northeastern city of Pemba and surrounding areas causing massive flooding and destruction.

One death has been confirmed so far and 160,000 people are at risk, with more torrential rain forecast for the days ahead.

The government described the situation as "critical" in other centers of Cabo Delgado province which are unreachable by road. In a statement Sunday night, the government said the death toll could rise due to "worrying" rains.

The towns of Ibo, Macomia and Quissanga have been badly flooded and many buildings and homes destroyed. Access to those centers is currently not possible by road and the heavy rains have made air contact difficult. Safe drinking water has become scarce.

Mozambique cholera cases jump to 139 a day after outbreak