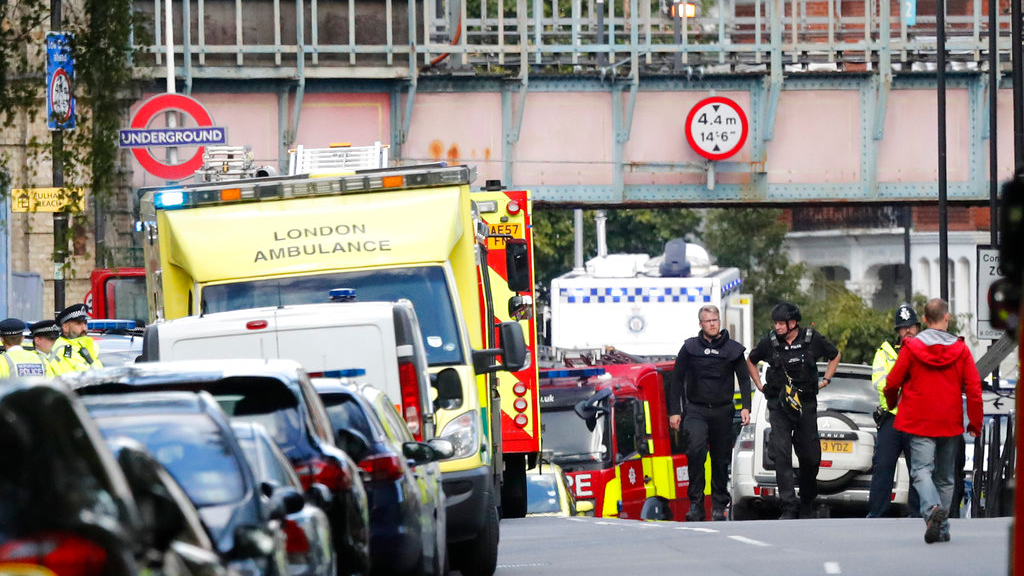 Ambulances and police nearby after an incident on a tube train at Parsons Green subway station in London, Friday, Sept. 15, 2017. A reported explosion at the train station sent commuters stampeding in panic, injuring several people on Friday at the height of London's morning rush hour, and police said they were investigating it as a terrorist attack.

The Latest on the London subway attack and the manhunt for suspects (all times local):

British police say they have arrested an 18-year-old man in connection with the London subway attack.

Police say the man has been arrested by Kent police in the port area of Dover on the English Channel.

Deputy Assistant Police Commissioner Neil Basu says that it's a "significant arrest." He said the investigation is ongoing and the terror threat level remains at "critical."

The man is being held for questioning under the Terrorism Act. He has not been charged or identified.

A bomb partially exploded on a London subway train at Parsons Green station Friday morning, leaving 29 people wounded, including those with burns and injuries from an ensuing stampede.

London transport authorities say they have re-opened the station where a bomb partially detonated on a subway car, injuring 29 people.

The blast sent what witnesses described as a fireball through the packed train during the Friday morning rush hour. The injuries, some from the explosion and others from an ensuing stampede, where not thought to be life-threatening.

Transport for London said that the Parsons Green station in southwest London station had reopened at 1:30 a.m. on Saturday, more than 17 hours after the explosion.

British authorities increased the country's terror threat level to "critical," meaning they think another attack may be imminent. No arrests have been made and a major manhunt for suspects is underway. British soldiers are being deployed across the country at public sites to assist police.

British authorities are searching for suspects in the London subway blast that injured more than two dozen people as hundreds of soldiers are being deployed across the country.

Authorities increased the terrorism threat level to "critical" late Friday, after a bomb partially exploded during the morning rush hour, meaning a government task force believes another attack may be imminent.

The soldiers will add to the police presence Saturday at public places to deter attacks after the blast on a District Line train. No arrests have been made. The explosion and an ensuing stampede at Parsons Green station injured 29 people. None of the injuries, some of them burns, were believed to be life-threatening.

The bomb was put into a bucket and concealed in a shopping bag.

Search for perpetrators of bomb on London subway, 29 wounded

Guyana’s disputed elections back in court