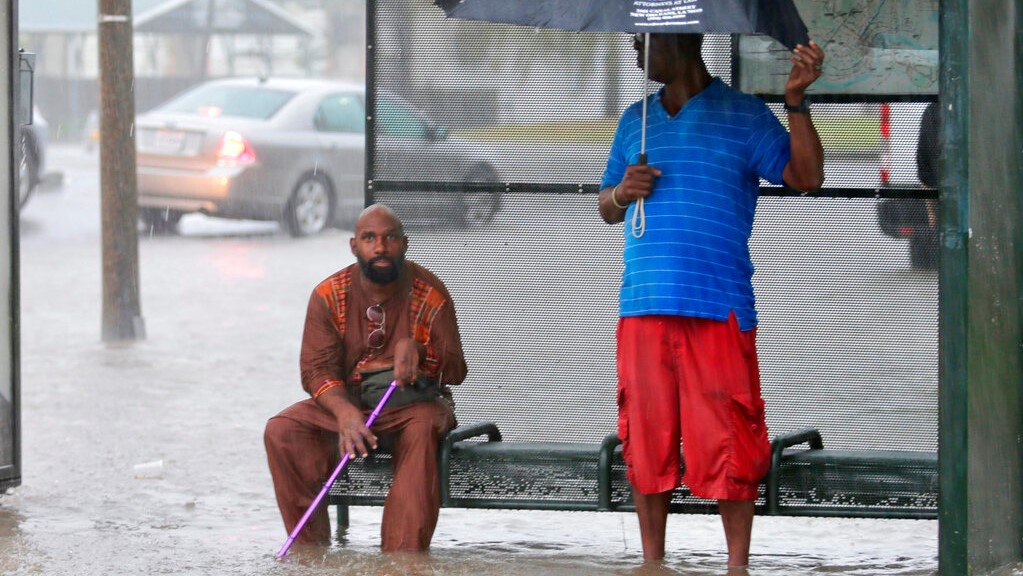 The Latest on a tropical weather system in the Gulf of Mexico (all times local):

Tropical Storm Barry has formed in the Gulf of Mexico and forecasters say it could become a hurricane as it threatens Louisiana's coast.

The U.S. National Hurricane Center says the storm's maximum sustained winds Thursday morning are near 40 mph (64 kph) with additional strengthening expected during the next day or two.

A tropical storm warning is now in effect for the Louisiana coast from the mouth of the Pearl River to Morgan City.

Plaquemines (PLAK-uh-minz) Parish spokeswoman Jade Duplessis says about 8,000 to 10,000 parish residents are under a mandatory evacuation order as a potential tropical storm brews in the Gulf of Mexico and half of them may need help.

All of the parish's east bank and part of its west bank are under mandatory evacuation orders.

The parish government has set up pickup points on both sides of the Mississippi River. From there, school buses will take people to a registration point and then to evacuation centres.

Duplessis says cats and dogs will be taken in separate vehicles and if owners don't have their own travel crates, the parish will provide them.

The evacuation order took effect at 6 a.m. Thursday. Duplessis says officials hope everyone is out by Friday afternoon.

The disturbance in the Gulf is expected to develop into a tropical storm late Thursday and could hit southern Louisiana as a weak hurricane this weekend.

The mayor of a barrier island town on Louisiana's coast has ordered a mandatory evacuation as a potential tropical storm brews in the Gulf of Mexico.

Mayor David Camardelle's order takes effect at noon Thursday on Grand Isle, which is accessible only by boat or a single flood-prone state highway.

Other low-lying areas of coastal Louisiana including the towns of Lafitte, Crown Point and Barataria also came under evacuation orders Thursday.

That follows similar orders Wednesday for parts of Plaquemines Parish,. The Mississippi River runs through the parish and could overtop some levees.

The disturbance in the Gulf is expected to develop into a tropical storm late Thursday and could hit southern Louisiana as a weak hurricane this weekend.

Carnival Cruise Line says it rerouted a cruise ship headed to New Orleans because of the potential tropical storm brewing in the Gulf of Mexico.

The Miami-based company says the more than 3,700-passenger Carnival Valor was sent to Mobile, Alabama, in the interest of safety. A company statement notes that coastal Louisiana is under a hurricane watch and water levels are high on the Mississippi River.

Mobile Mayor Sandy Stimpson tweeted a welcome to Valor passengers and a photo of the ship docked in Mobile on Thursday.

Carnival says arriving passengers will be taken from Mobile to New Orleans on complimentary buses.

The ship was supposed to depart Thursday from New Orleans on its next four-day cruise to Cozumel, Mexico. Instead, passengers will be taken to Mobile by bus from New Orleans.

A potential tropical storm brewing in the Gulf of Mexico presents twin troubles for parts of southeast Louisiana.

It could contribute to the rising of an already high Mississippi River, with water reaching the tops of levees this weekend. And there is also the widespread danger of flash floods like the one that walloped New Orleans on Wednesday. Officials said that storm dumped as much as 8 inches (20 centimetres) in parts of the metro area in three hours.

The Gulf disturbance that spawned the floods was forecast to strengthen into a tropical storm by Thursday night.

Forecasters said Louisiana could see up to 12 inches (30 centimetres) of rain by Monday. Some areas could get 18 inches (46 centimetres).

Mississippi and Texas were also at risk of torrential rains.