The Latest: UK government to try again for early election 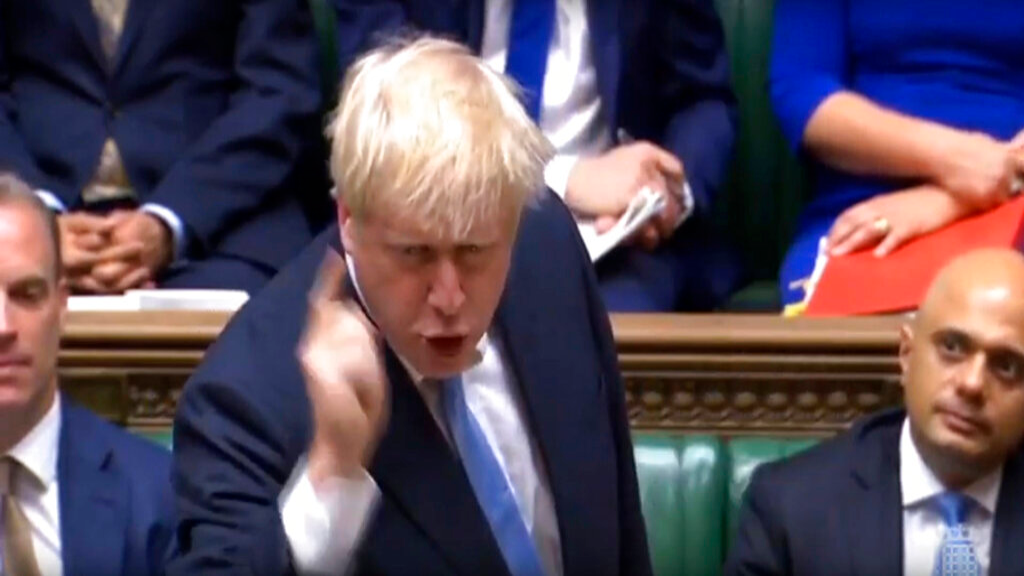 LONDON (AP) — The Latest on Brexit (all times local):

The British government says it will try again next week to trigger an election after its first attempt was rejected by Parliament.

Leader of the House of Commons Jacob Rees-Mogg says a vote will be held Monday on a motion calling for a snap poll.

Prime Minister Boris Johnson wants to hold an election to break the country's Brexit impasse. But opposition lawmakers are refusing to support him unless he lifts his threat to take Britain out of the EU on Oct. 31 without a divorce agreement.

Parliament is currently passing a law that would compel the government to seek a delay to Brexit rather than crash out on Halloween. The opposition Labour Party says once the bill becomes law — expected to happen Monday — the party will agree to a new election.

The British pound is surging as it becomes likely that a bill will be approved blocking a no-deal Brexit on Oct. 31.

Britain's currency took a hammering early this week, falling below $1.20, to its lowest since 1985, excluding a brief two-minute crash in 2016. Investors were concerned that Prime Minister Boris Johnson would be able to suspend parliament and bring the country out of the EU, with or without a deal. A no-deal exit is widely considered a worst-case scenario for businesses and consumers both in Britain and many European countries.

But the pound recovered as British lawmakers this week wrested control over the Brexit timetable away from Johnson. A bill blocking a no-deal Brexit is on course to pass into law before Parliament is suspended next week.

Johnson has called for a general election, but needs the opposition to agree. Whether one happens - and when - remains uncertain.

The European Union says the British government has made no proposals for ending the Brexit deadlock, with a new round of technical talks aimed at ending the impasse set to take place on Friday.

European Commission spokeswoman Mina Andreeva said Thursday that "for the talks to make progress we would need to receive concrete proposals that are compatible with the withdrawal agreement."

Andreeva says that U.K. negotiator David Frost and his EU counterparts have "agreed to meet again on Friday" in Brussels, following a first meeting on Wednesday.

She declined to speculate on developments in the British Parliament, saying: "Our working assumption is that Brexit should occur on the 31st of October as was demanded by the U.K."

Britain's divide over Brexit has cost Prime Minister Boris Johnson another member of his embattled government — his own brother.

Jo Johnson has announced he is quitting as an education minister and will step down from Parliament, saying he is "torn between family loyalty and the national interest."

He tweeted that "it's an unresolvable tension & time for others to take on my roles as MP & Minister."

Jo Johnson opposed leaving the European Union during the 2016 referendum campaign and later said the country should not quit the bloc without a divorce deal. But in July he accepted a job in the government formed by his brother, who argued the U.K. must leave the EU on Oct. 31, deal or no deal.

British Prime Minister Boris Johnson's office says he will seek the public's support for his bid to hold a general election.

His Downing Street office says Johnson plans to speak directly to the public Thursday, a day after his bid for an early general election was rebuffed in Parliament.

Details about Johnson's planned appearance have not been made public yet.

His office reiterated that Johnson will not ask European Union officials for another delay in enacting Brexit. Such a delay would take the United Kingdom's departure from the bloc beyond the current Oct. 31 deadline.

Germany's economy minister is urging British Prime Minister Boris Johnson to present proposals for a post-Brexit relationship with the European Union, saying Britain's departure will bring "burdens on both sides."

Peter Altmaier told Germany's Funke newspaper group Thursday that he expects Johnson "to deal responsibly with the citizens of his country and the EU partners."

Altmaier says, "It's not just about the issue of a deal or no deal, but about the time after the exit: we urgently need clarity on what the future relationship will look like."

He says that, for example, customs controls in the case of an unregulated Brexit would be significantly more expensive.

A bill blocking a no-deal Brexit is on course to pass into law before Parliament is suspended next week.

The British Parliament's upper chamber, the House of Lords, voted early Thursday to push through the bill.

The bill's supporters had feared its opponents in the Lords could try to stop it by filibustering.

But in a session that lasted until 1.30 a.m. in London, peers agreed to return the bill to the Commons on Monday for any amendments before passing into law.

Lawmakers in the House of Commons hope to pass the bill into law — a process that can take months — in days because Prime Minister Boris Johnson plans to suspend Parliament at some point next week until Oct. 14.

Johnson is looking for ways to bring about a national election after rebellious British lawmakers moved to block his plan to leave the European Union next month without a divorce deal and rejected his call to trigger a snap poll.

Prime Minister Boris Johnson is looking for new ways to bring about a national election after rebellious British lawmakers rejected his call to trigger a snap poll and moved to block his plan to leave the European Union next month without a divorce deal.

Events have spiraled out of Johnson's control. He leads a government with no majority in Parliament and may not be able to secure an election that could change that fact.

The latest setback for Johnson came Wednesday evening after he called for a national election on Oct. 15, saying it was the only way out of Britain's Brexit impasse after lawmakers moved to block his plan to leave the European Union next month without a divorce deal.

But Parliament turned down his motion and the prime minister indicated he would try again, saying an election was the only way forward for the country and urging opposition lawmakers to "reflect overnight and in the course of the next few days."

The Latest: EU warns firms to get ready for no-deal Brexit