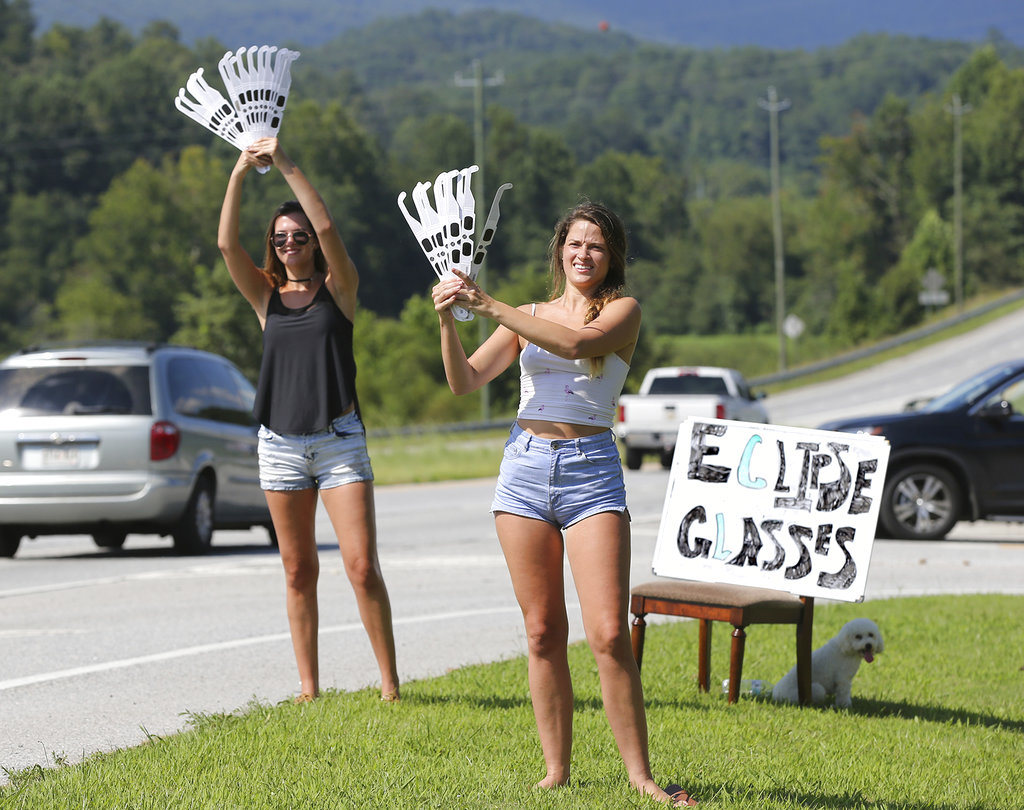 Ashley Ann Sander, left, and Alexandra Dowling hawk solar eclipse glasses for $10 a pair on the side of the road to tourists approaching Clayton, Ga., Sunday, Aug. 20, 2017. Clayton is in the path of totality in North Georgia. (Curtis Compton/Atlanta Journal-Constitution via AP)

The Latest on the total solar eclipse crossing the U.S., from Oregon to South Carolina (all times EDT):

Eclipse viewers, many of them slathered with sunscreen, are streaming into the noisy Nashville Zoo hours early to see both the eclipse and animals' weird reactions to it.

Zoo spokesman Jim Bartoo says people were camping out at the zoo entrance at 6 a.m., three hours before the gates opened and seven-and-a-half hours before totality.

Paulette Simmons of Nashville came to the zoo after a doctor's appointment, saying she decided on the location because she wanted to see how the animals reacted.

The flamingo lagoon is one of the most popular locales, with the birds expected to roost and get noisy when the sun darkens.

Ninety minutes after the zoo opened, the pathways were clogged with people.

Baseball fans in more than a half-dozen cities are heading to ballparks to watch the solar eclipse as teams look to cash in with game-day viewing parties.

Minor league teams from Oregon to South Carolina have scheduled games Monday to coincide with the total eclipse as it streaks across the United States.

In Nebraska, the Lincoln Saltdogs will wear special eclipse jerseys and stop their game to watch the full eclipse at 1:02 p.m. The team says it has sold tickets to buyers from as far away as the United Kingdom and Germany.

No big league games are scheduled to coincide with the eclipse.

Forecasters say it looks like a big chunk of the nation on the path of the total eclipse will get clear viewing for the sky show.

National Weather Service meteorologist Patrick Burke says about 70 percent of the area on the 70-mile path stretching from Oregon to South Carolina is likely to have clear skies when the moon moves in front of the sun.

Burke says it looks good for the Pacific Northwest, the Northern Rockies, Tennessee, Kentucky, and into western South Carolina.

The toughest areas are coastal South Carolina, eastern Nebraska, north and central Missouri and Illinois. Burke says those areas will have thick clouds and have to dodge pop-up thunderstorms.

Astronomers say clouds and rainstorm make it difficult to see the classic image of the blotted out sun.

With just hours to go before a total solar eclipse would reach the Oregon coast, people were streaming into the fairgrounds in Salem, Oregon, to view the spectacle Monday morning.

The sound of Taiko drummers filled the air during a pre-eclipse show at the fairgrounds. Less than 50 miles north in Portland, Oregon, eclipse experts, contest winners, an astronaut and members of the media were boarding an Alaska Airlines charter flight to fly two hours southwest in to intercept the eclipse about 10 a.m. PDT.

Meanwhile, thousands of eclipse tourists were gathered in the tiny town of Weiser, Idaho. Among them was Agnese Zalcmane, who traveled to the western United States from Latvia so she could be in the zone when the moon's shadow completely covers the sun.

Americans with telescopes, cameras and protective glasses are staking out viewing spots to watch the moon blot out the midday sun Monday.

It promises to be the most observed and photographed eclipse in history. The main drag will stretch along a narrow corridor from Oregon to South Carolina. Millions of eclipse watchers are expected to peer skyward, and they're hoping for clear weather.

It will be the first total solar eclipse to sweep coast-to-coast across the U.S. in 99 years.

Can't see the solar eclipse? Tune in online or on TV

The lore and lure of eclipses: Blood, sex and some snacking