At least they're talking: EU, UK push on with Brexit meets 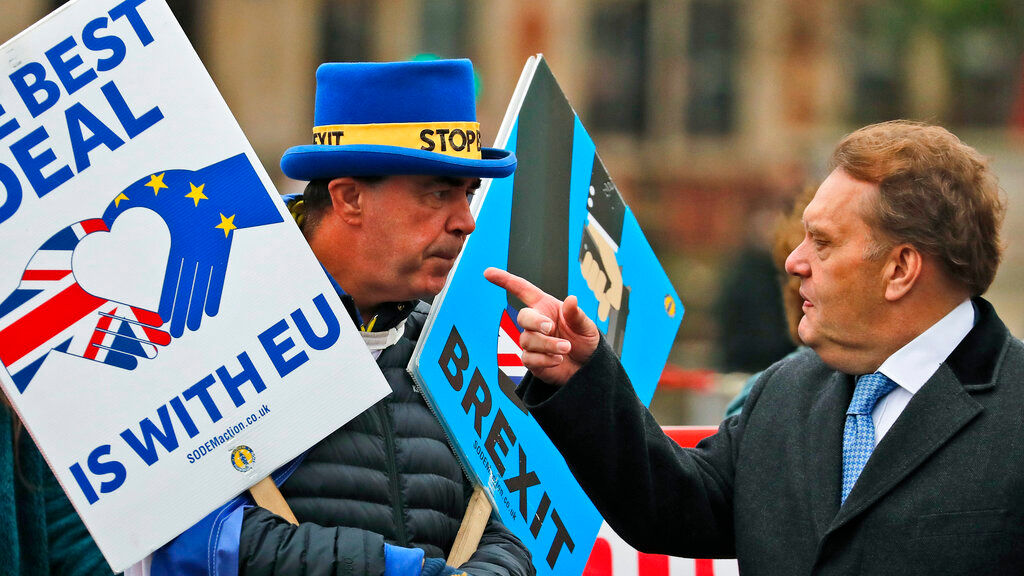 British and European Union negotiators agreed Friday to press on with talks in search of an elusive Brexit deal, as Ireland's deputy leader warned that the two sides remain far apart despite an improvement in the "mood music."

After weeks spent demanding that Britain provide concrete proposals for ending the deadlock, the European Commission said that technical meetings are focusing on "a first set of concepts, principles and ideas that the United Kingdom has put forward."

The announcement came after talks in Brussels between Britain's Brexit Secretary, Stephen Barclay, and EU chief negotiator Michel Barnier, as the U.K. and the EU struggle to strike a last-minute deal before Britain's scheduled departure date of Oct. 31.

Barclay was upbeat, saying the meeting had overrun — a sign of progress.

"There's a common purpose both in Dublin, in London and here in Brussels to see a deal over the line," he said. "We were getting into the detail."

Barclay said the two sides' technical teams would meet next week, and Prime Minister Boris Johnson was due to meet EU Council President Donald Tusk at the U.N. General Assembly in New York.

But the commission cautioned that "it is essential that there is a fully workable and legally operational solution" included in the legally binding Brexit divorce agreement.

After months of stalemate, and with less than six weeks to go until Brexit is due, the two sides are sounding slightly more optimistic. Commission President Jean-Claude Juncker told Sky News on Thursday that "we can have a deal," though he wouldn't say whether the odds of getting an agreement were better than 50-50.

Irish Deputy Prime Minister Simon Coveney told the BBC on Friday that there were still "serious problems" over how to handle the Irish border issue once Britain leaves the EU.

He said Johnson had convinced Irish leaders he is serious about seeking a new deal, but had not provided realistic alternatives to the "backstop," a contentious measure for maintaining an open Irish border.

Johnson insists he is working hard to get an agreement with the EU that will ensure a smooth departure. EU leaders are skeptical of that claim, saying the U.K. has not produced any concrete proposals.

"We are still waiting for serious proposals from the British government," Coveney said.

Britain says it has not revealed detailed proposals because they would likely leak, to the detriment of negotiations. But the government insisted Thursday it had sent "confidential technical non-papers which reflect the ideas the U.K. has been putting forward." Non-papers are documents intended for discussion, rather than formal proposals.

The EU confirmed it had received new documents from Britain relating to ways of maintaining an open border between EU member Ireland and the U.K.'s Northern Ireland — the key sticking point to a deal. An invisible border is vital both to the local economy and to Northern Ireland's peace process.

The commission said Friday that the EU remains "willing and open to examine any such proposals" that meet all the objectives of the backstop proposal now in the agreement but which Britain wants removed.

Brexit supporters oppose the backstop because it potentially keeps the whole of the U.K. bound to EU trade rules, limiting its ability to forge new free trade agreements around the world after its departure.

Britain has suggested the backstop could be replaced by "alternative arrangements" — a mix of technology to replace border checks and a common area for agricultural products and animals covering the whole island of Ireland.

"We want to find a solution, we want to get a deal, and we want to allow the U.K. to leave the EU in an orderly and sensible manner, but we cannot allow Ireland to be the collateral damage of that," Coveney said.