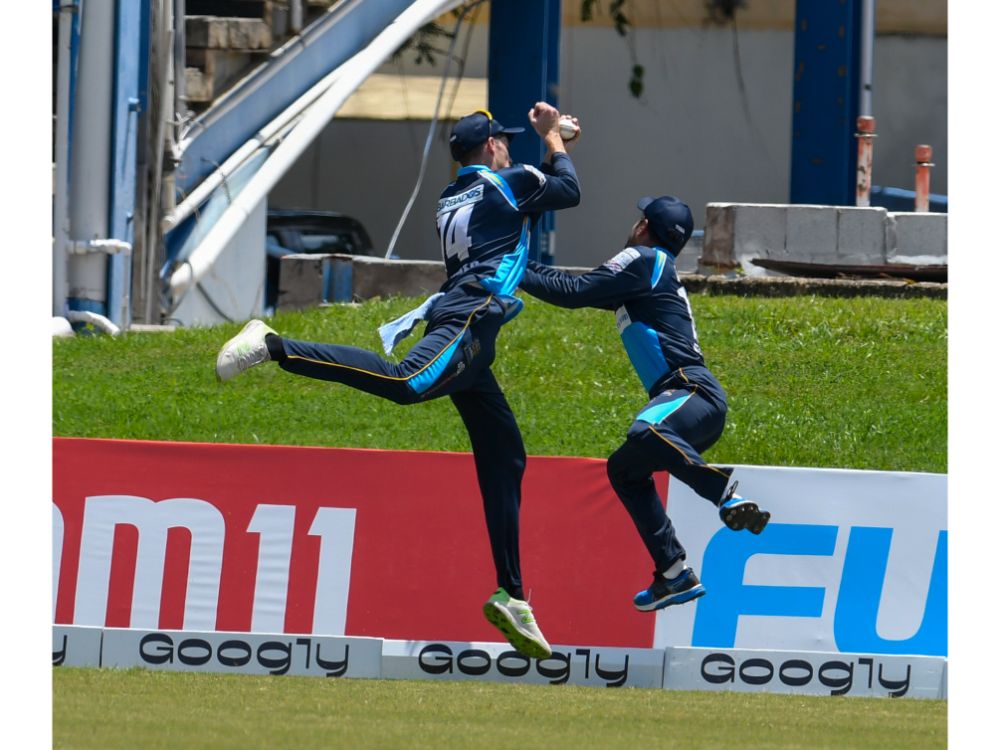 Mitchell Santner (left) and Rashid Khan of the Barbados Tridents go for a catch on the deep midwicket boundary during their six-wicket loss to the St Kitts and Nevis Patriots on 25 August 2020 at the Queen's Park Oval in Trinidad. (Photo by Randy Brooks - CPL T20/Getty Images)

Evin Lewis battered the Barbados Tridents to lead the St Kitts and Nevis Patriots to their first win in the 2020 Hero Caribbean Premier League.

Chasing 152 for victory, Lewis smashed 89 off 60 balls with nine maximums, before Ben Dunk (22 off 11 balls) finished the win with consecutive sixes off Nyeem Young.

The Tridents are still in 5th place after their third loss in a row, while the Patriots stay in sixth place despite registering their first win of the 2020 CPL campaign.

Shai Hope again started slowly and was still under a run a ball at the end of the Powerplay.

Jaggesar could have dismissed him three times, but the off-spinner got a reward with the wicket of Johnson Charles, who missed a sweep and was out LBW.

Hope continued to eat up deliveries before Jaggesar finally got him, Emrit taking the catch at deep midwicket to leave the Tridents 59/2 at halfway.

Kyle Mayers seemed unfazed, and first over after the drinks break he took ten off Imran Khan, including a big Hero Maximum.

He got a fierce pull shot away, but fell next ball slashing hard at one wide outside off, Ramdin taking a smart catch.

Holder fell in a flukey manner - Tanvir got a hand on a straight drive and the batsman had no chance of getting back.

The Tridents sent Ashley Nurse up the order to join Corey Anderson, who was more comfortable now he’d been moved into the middle-order and slog-swept Imran for six to end the over.

The 15th from Emrit was tight, but Joseph returned with five wides and the over went for 12.

Nurse and Anderson both walloped Tanvir for Hero Maximums and Nurse hit a four to cap a 21-run last over off Tanvir.

Nurse punished Joseph with a superb straight six, and while a good diving catch from Lewis put an end to the Bajan’s exploits, that rapid-fire stand of 56 off just 29 balls had the Tridents well set to dip for the line at 136/5 off 18.

Anderson greeted Emrit’s return with a Hero Maximum over long-on but then chipped a full toss to cover.

Imran deserves credit, as his the 20th over went for just six, but even so the Tridents will have been the happier at the innings break.

After a tight first over from Holder, Chris Lynn swung a Mitchell Santner full toss for six.

In the third over Holder was not so accurate - he strayed leg-side and Lewis clipped for four, he bowled length and Lewis lofted for six.

Santner found some turn, but two boundaries meant the Patriots were off to a flyer.

Rashid Khan changed that first ball - Lynn had no answer to the googly and fell LBW.

Joshua da Silva edged a Test style Holder leg-cutter to the keeper, and a wicket-maiden meant the Patriots reached the Powerplay at 41/2.

Lewis took a liking to Hayden Walsh Jr, hitting four of his first eight balls for six to bring up 50 off just 28 balls.

With the Patriots ahead of the rate and just two down Holder had to bring on Rashid, and while the Afghan went for just three the Patriots were well set at halfway at 74/2.

Raymon Reifer’s tight over gave cover for West Indies’ U19 star Nyeem Young to bowl his first senior professional over, and the youngster went for just three.

Lewis was lucky Reifer couldn’t hold a tough caught-and-bowled chance, but there was nothing lucky about the Hero Maximum next ball.

The subdued Denesh Ramdin finally hit his first four, and the Patriots seemed to have got going again with a 13 run over.

But back came Rashid again with a tight over, and good bowling from Young and brilliant boundary fielding from Santner meant the Patriots needed 46 off the last five overs.

With Ramdin sluggish, Lewis had to break free off Rashid. He did, just - a toe-end went incredibly high and just landed safely, but the Afghan’s last ball ended up on the roof of the Learie Constantine stand as the Patriots stayed in touch.

Mayers for the 17th was a gamble, but he denied Lewis the strike and a simple catch for Walsh Jr finally ended Ramdin’s stuttering innings of 20 off 32.

Dunk at least ensured Lewis was on strike come the start of the 18th with 31 still needed.

Lewis heaped the pressure on Young with a six, but the debutant recovered to leave the Patriots needing 10 RPO with two overs to go.

The pressure finally told on Lewis as he picked out Rashid with nine balls to go and 20 still to win, but he had done as much as he could.

Support finally came from Dunk, who found the fence with a deft reverse flick, meaning the inexperienced Young had 13 to defend.

While the debutant bowled to his field, he missed his length twice and Dunk showed his class in franchise cricket to get the Patriots on the board at the fourth time of asking.