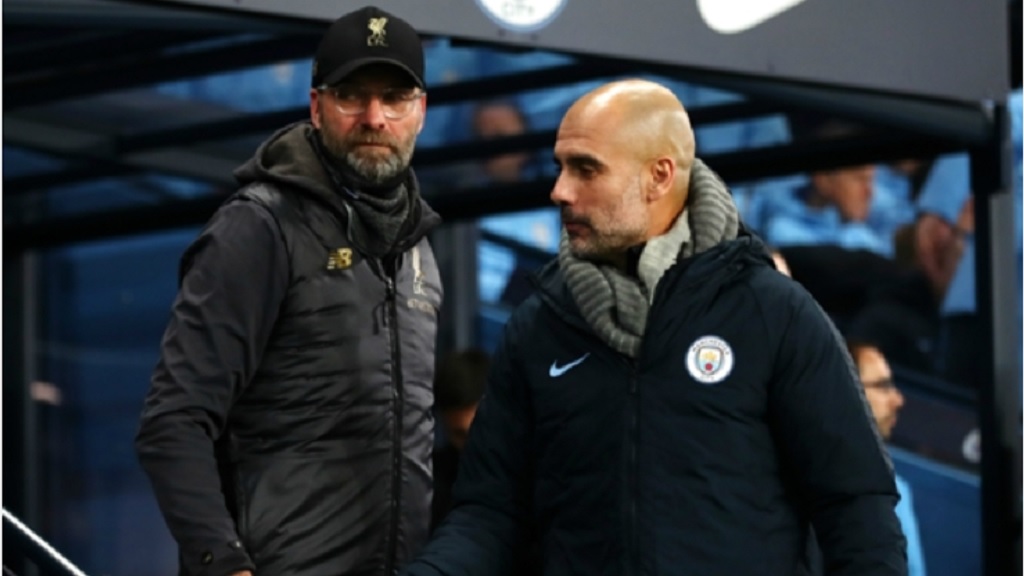 Pep Guardiola has declared Liverpool "the strongest opponents I have faced in my career as a manager" after Manchester City shipped an early lead in this season's title race.

City are pursuing a third consecutive Premier League crown but a shock 3-2 loss at Norwich City last weekend – their first top-flight loss since January – left them five points shy of Jurgen Klopp's men, who have won five out of five in 2019-20.

As the two sides engaged in a titanic battle last season, City eventually prevailing on 98 points to Liverpool's 97, Guardiola said the Reds ranked alongside the Barcelona side of 2014-15 and their forward line of Lionel Messi, Luis Suarez and Neymar when it came to considering his strongest foes.

Speaking ahead of Saturday's home game versus Watford, the former Barca and Bayern Munich boss stated Klopp's Liverpool were now out on their own.

"You have to understand what we have done in the past does not ensure you can do it tomorrow or the day after," Guardiola said.

"The opponents we have, I've said many times, are the strongest opponents I have faced in my career as a manager – Liverpool.

"They have absolutely everything in terms of a positional game, counter-attack, set pieces, transitions, offensive, defensive and mentality. Anfield the stadium – many things.

"But that is the challenge. The same with the central defenders. We go, 'Okay, let's find a solution to keep the team stable and good'."

Guardiola has limited options in the heart of defence following injuries to Aymeric Laporte and John Stones, the latter set to return in around a month from a thigh problem.

It meant defensive midfielder Fernandinho beginning a transition to defence alongside remaining specialist Nicolas Otamendi against Shakhtar Donetsk and the Brazil international impressed throughout a 3-0 win.

"We don't have many other options," Guardiola said. "Rodri can play there and of course two young players who we trust a lot, especially Eric [Garcia].

"Last season he was training all season with us. Taylor Harwood-Bellis was with us in the pre-season and we were impressed.

"It is not a problem, it is a challenge. I don't take these situations like a problem.

Guardiola also offered reflections on City's stunning reverse at Norwich, which did not displease him to the same extent as the previous time they lost in the Premier League – a 2-1 defeat at Newcastle United that looked to have given Liverpool a decisive title advantage.

"After watching the game against Norwich, I was not really upset for the way we played. I was upset after Newcastle [last season] – after 1-0 after one minute we forgot to play," he added.

"Against Norwich we shot more than 15 times and we could have one. In Newcastle I don't have that feeling after one minute."

Coronavirus cases in the Caribbean to date: 65,942

Coronavirus cases in the Caribbean to date: 65,942