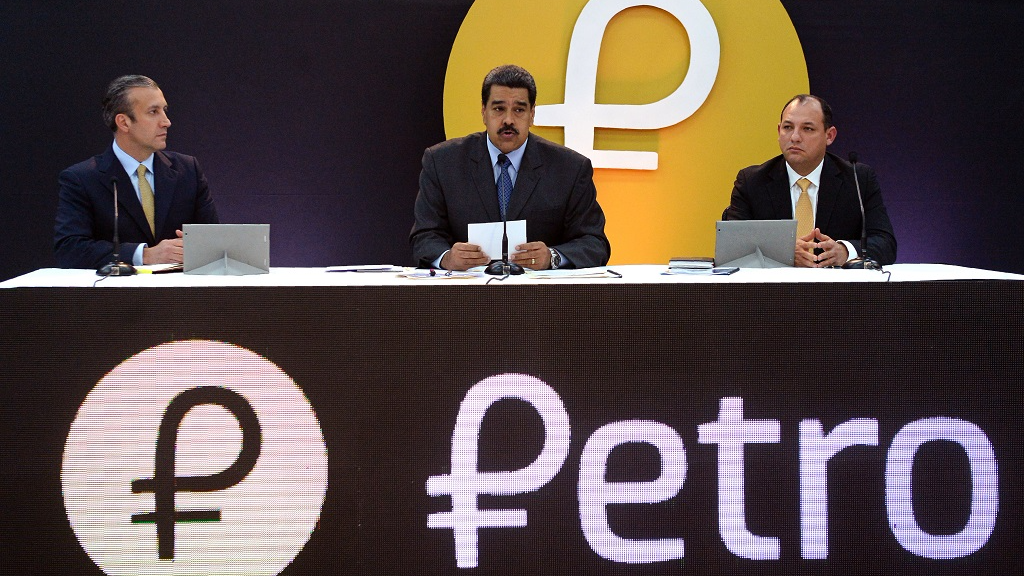 Cash-strapped Venezuela on Tuesday became the first country to launch its own version of bitcoin, a move President Nicolas Maduro celebrated as putting his country on the world's technological forefront.

In its first hours on the market, the so-called petro racked in $735 million worth in purchases, Maduro said without providing details.

The petro is backed by Venezuela's crude oil reserves, the largest in the world, yet it hit the market as the socialist country sinks deeper into an economic crisis marked by soaring inflation and food shortages that put residents in lines for hours to buy common products.

"We have taken a giant step into the 21st Century," Maduro said in a nationally broadcast show. "We are on the world's technological vanguard."

The petro's unveiling played out before a live studio audience inside the presidential palace Miraflores, complete with red carpets and a splashy set prominently displaying a crafted marketing symbol "P," for petro.

Maduro received a brief demonstration on the sophisticated computer technology needed to support the digital currency, and he heard from a Russian executive of a company that will run the platform.

The president also authorized payments in cryptocurrency for Venezuela's consulate services and fuel on the border, saying it is just the "kryptonite" Venezuela needs to take on Superman — code for the imperialist United States.

Venezuelan officials, however, have released few of the nitty-gritty details of how it will work, ensuring investors that it is safe. Venezuela watchers offered potential investors fair warning.

"My advice would be to tread very carefully with this — especially considering the track record of the Venezuelan government," said Federico Bond, co-founder of Signatura, a digital startup based in Argentina.

The government said it will release 100 million digital petro coins during the first year, with the initial 38.4 million expected to go on sale Tuesday at a value of $60 per token.

If all the initial coins offered for sale are grabbed by investors, it could potentially bring several billion dollars into a government mired by cash shortfalls and skyrocketing inflation.

The government has promised that Venezuelans will be able to use the coins to pay taxes and public services. But with the Venezuelan minimum wage hovering around $3 a month, it's unlikely citizens will buy in large amounts.

The U.S. Treasury Department has warned U.S. citizens and companies that buying the petro would mean violating sanctions, putting another damper on the release.

Cryptocurrency experts are looking at Venezuela's foray into digital currencies with a mix of intrigue and suspicion, excited by the prospect of a government willing to accept cryptocurrency for payments like taxes but also concerned about the potential lack of oversight.

Maduro has touted the petro as fulfilling the late Hugo Chavez's dream of upending global capitalism away from the dominance of the U.S. dollar and Wall Street.

Raising further doubts, Maduro has said that the undeveloped Orinoco oilfield will back the digital currency, creating no tangible barrels of oil that investors can cash in, said Jean Paul Leidenz, a senior economist at Caracas-based EcoAnalitica.

Bitcoin and other digital tokens are already widely used in Venezuela as a hedge against hyperinflation and an easy-to-use mechanism for paying for everything from doctor visits to honeymoons in a country where obtaining hard currency requires transactions in the illegal black market.

The use of computers for bitcoin mining has also taken off, spurred by some of the world's cheapest electricity rates and widespread desperation prompted by a recession deeper than the U.S. Great Depression.

Cryptocurrencies by design are decentralized financial systems, so one created by a government runs contrary to that spirit and creates an opportunity for manipulation, said Leidenz.

And Venezuela's inflation rises faster in a day than it does in stable countries in a year, he said, adding that dreaming up a new currency alone isn't the answer.

"You cannot stop hyperinflation by creating a new currency and doing nothing else," Leidenz said. "The government has no plans of undertaking structural reform."