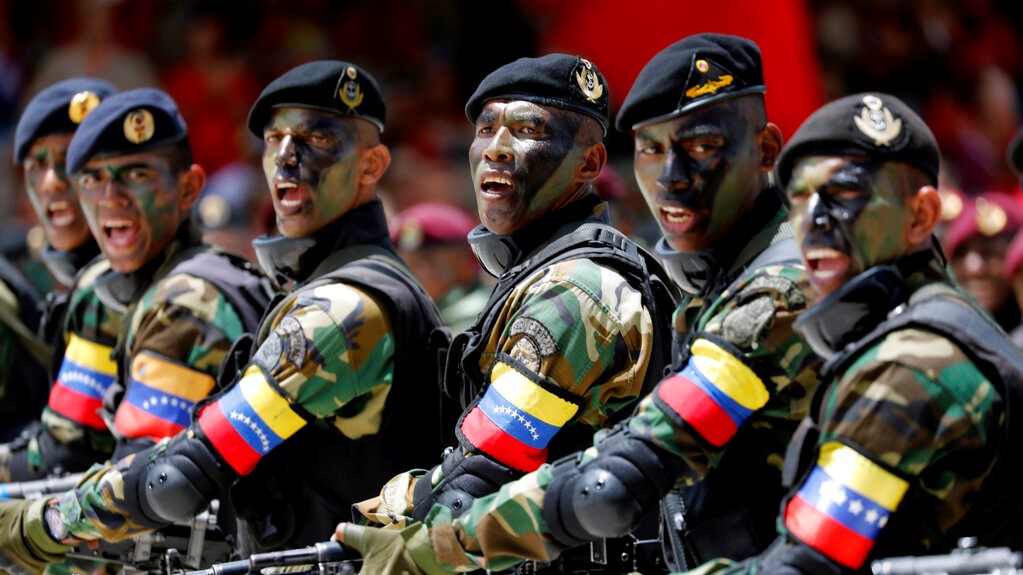 Venezuela's President Nicolás Maduro oversaw a grand military parade to mark the country's independence day Friday, revelling in his might as commander in chief as the embattled socialist leader comes under mounting criticism for using brutal tactics to crush his opponents.

Maduro applauded and pumped his fist as soldiers marched past, tanks rolled by and fighter jets streaked overhead at a Caracas military base. A unit of camouflaged special forces, guns drawn, shouted their loyalty as they paraded by the presidential reviewing stand.

"We look to the heavens, asking for peace," Maduro said. "All the while our military exercises play out. We plead to God with our missiles pointed."

The parade served as a demonstration of Maduro's continuing support from the military amid a political standoff with opposition leader Juan Guaidó, who is trying to oust Maduro and has the backing of more than 50 nations, including the United States. 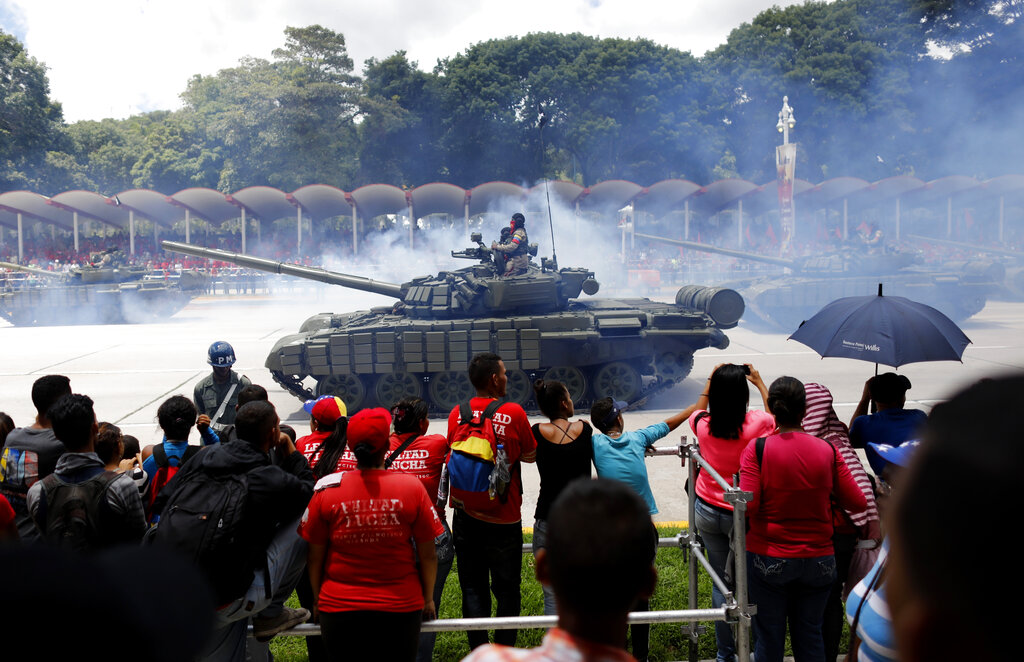 Guaidó, who led a rival march across town Friday, claimed presidential powers in January, at the time drawing throngs of supporters for demonstrations against Maduro, who has overseen the oil-rich nation's historic collapse. More than 4 million Venezuelans have left the country amid food and medicine shortages and crushing inflation.

As head of the opposition-controlled National Assembly, Guaidó claims that Maduro's election in 2018 to a second, six-year term is illegitimate because the most popular political figures and parties were barred from running.

Maduro refuses to step aside, blaming Venezuela's woes on an economic war against the country led by the Trump administration, and Guaidó has not been able to lure a critical mass of soldiers to back him.

In his brief address, Maduro renewed his call for a dialogue with the opposition. As he spoke, members of Venezuela's militia each held a cardboard box of the type used to distribute government-subsidised food.

Despite the splashy military parade, Maduro has had some defectors. Colombian authorities say a few hundred soldiers have abandoned Maduro in recent months.

Most notably, Maduro's spy chief Gen. Manuel Cristopher Figuera fled after a failed military uprising staged April 30 with Guaidó and another popular opposition leader, Leopoldo López. Now in the United States, Cristopher Figuera says his mission is to "seek help to free my country from disgrace."

Venezuelans interviewed by the human rights workers referred to a particular security unit, FAES, as a "death squad" or "extermination group."

Maduro's government has also undermined the rule of law and dismantled democratic institutions, the U.N. reported.

"These measures are aimed at neutralising, repressing and criminalising political opponents and people critical of the Government," the report said.

Deputy Foreign Minister William Castillo blasted the report, saying it failed to reflect "the reality in our country." He demanded the report be corrected and said the government would heed "constructive" and "balanced" recommendations.

Security forces turned out at just 15 percent of 89 anti-Maduro demonstrations nationwide Friday, a dramatic departure from the government's zero-tolerance stance, according to figures Guaido's team provided to The Associated Press, which could not independently confirm them.

National Assembly lawmaker Marco Quinones said that shows the government's fear of international repercussions following the U.N. report, or it is proof of eroding support for Maduro among soldiers, who no longer want to repress their fellow citizens with tear gas and shotguns.

Across town, Guaidó called on Venezuelans to take to the streets with him Friday for demonstrations marking 208 years since Venezuela won its freedom from Spain.

A few thousand joined him, far fewer than the number who turned out at demonstrations earlier this year. They marched toward the headquarters of a military intelligence agency in Caracas, where days earlier a navy captain opposed to Maduro was tortured to death, according to his wife and attorney.

Grasping a microphone with his shirt sleeves rolled up, Guaidó urged the military to join his movement, saying that anyone in Venezuela who continues to support this "dictatorship" is an accomplice to human rights abuses.

"We're marching for freedom," Guaido said. "We're turning our outrage into a movement, and we'll be on the streets until we achieve freedom."

The marchers included families, students and members of the clergy. No immediate violence was reported. Previous opposition marches erupted in deadly clashes with police.

Among the demonstrators backing Guaidó was Melquiades Rosales, whose small business selling shower doors is failing. As a symbol of the country's mourning, Rosales waved a Venezuelan flag made with shades of gray instead of the original vibrant yellow, blue and red.

"So many of us are filled with hopelessness," Rosales said, adding that he hasn't given up. "But we're in this for a long-term fight. This dictatorship is so well-rooted in all the institutions."

US sanctions Cuban firm to weaken Maduro's hold in Venezuela