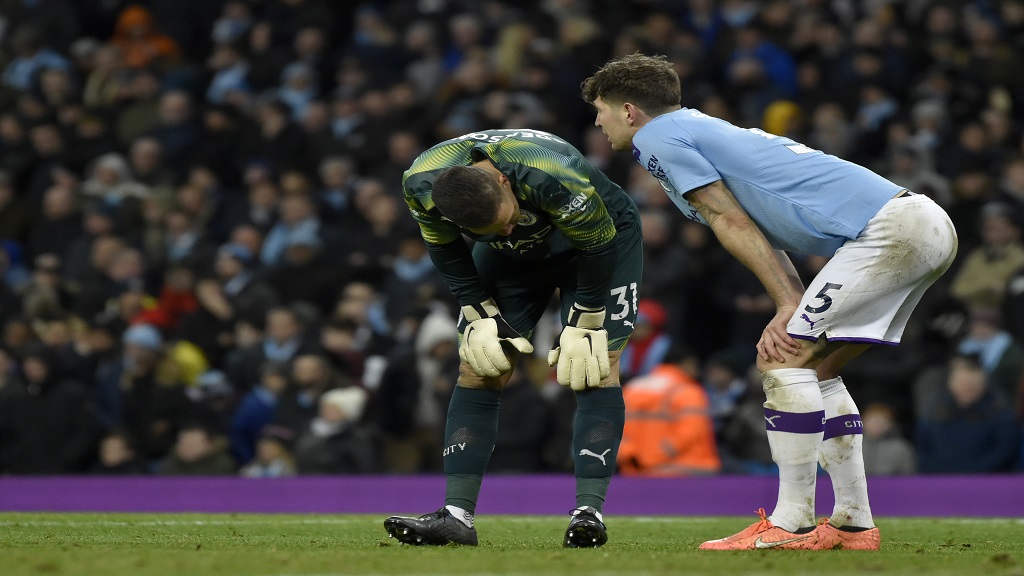 City's draw means Liverpool can extend their lead to an almost insurmountable 16 points by beating Manchester United on Sunday.

London rivals Arsenal and Tottenham each took blows to their bids for Champions League places, both drawing in games they could have won.

Not even Sergio Aguero's fearsome goalscoring form could earn City a win over a tenacious Crystal Palace team.

With City staring at a possible defeat courtesy of Cenk Tosun's 39th-minute goal for Palace, Aguero scored twice in the last 10 minutes, taking him to six goals from his last three EPL games. However, Palace wasn't done and leveled in the 90th when Wilfried Zaha's ball went in off Fernandinho.

Leicester can move level on points with City if they beats Burnley on Sunday but won't retake second place on goal difference.

With Pierre-Emerick Aubameyang suspended, Arsenal lacked the attacking firepower to see off Sheffield United in a 1-1 draw.

John Fleck salvaged a draw for Sheffield with a bouncing shot in the 83rd after two 18-year-olds had combined for Arsenal's opening goal. Gabriel Martinelli was the scorer, knocking the ball in from close range after fellow youngster Bukayo Saka's cross was deflected and looped over the Sheffield defense.

However, Arsenal could have built a bigger lead. Martinelli sent two other first-half chances wide, while Arsenal was aggrieved not to be awarded a penalty by the video assistant referee when Jack O'Connell missed the ball and made contact with Nicolas Pepe's legs in the box.

Dele Alli was left fuming in the Tottenham dugout as last season's Champions League finalist slipped further away from qualifying for next season's competition with a 0-0 draw at Watford.

A penalty save by goalkeeper Paulo Gazzaniga kept Tottenham in the game before a goal-line clearance from Watford's Ignacio Pussetto stopped Tottenham sneaking a win in stoppage time.

Jose Mourinho's team last won in the league against Brighton on Dec. 26. The frustration was clear when Alli threw an object to the ground in the dugout after being substituted. Watford is six league games unbeaten and has picked up 14 points from a possible 18 in that time.

Tottenham have not scored in 277 minutes of league action and again struggled to create and finish chances, with top scorer Harry Kane out until April with injury.

Wolverhampton showed plenty of hunger to win, coming back from 2-0 down to beat Southampton 3-2.

Pedro Neto got Wolves going with a goal in the 53rd before Raul Jimenez powered the team to victory with two goals, the first of those from the penalty spot after a long VAR wait.

Teemu Pukki's penalty gave last-place Norwich some hope of avoiding the drop in a 1-0 win over fellow relegation contender Bournemouth. Both teams finished the game with 10 men after receiving a red card apiece.

Jack Grealish scored to rescue a 1-1 draw for Aston Villa at Brighton, while West Ham and Everton also drew 1-1.

Manchester City come from behind to beat Leicester 3-1

Rashford unlikely to be fit to face Liverpool