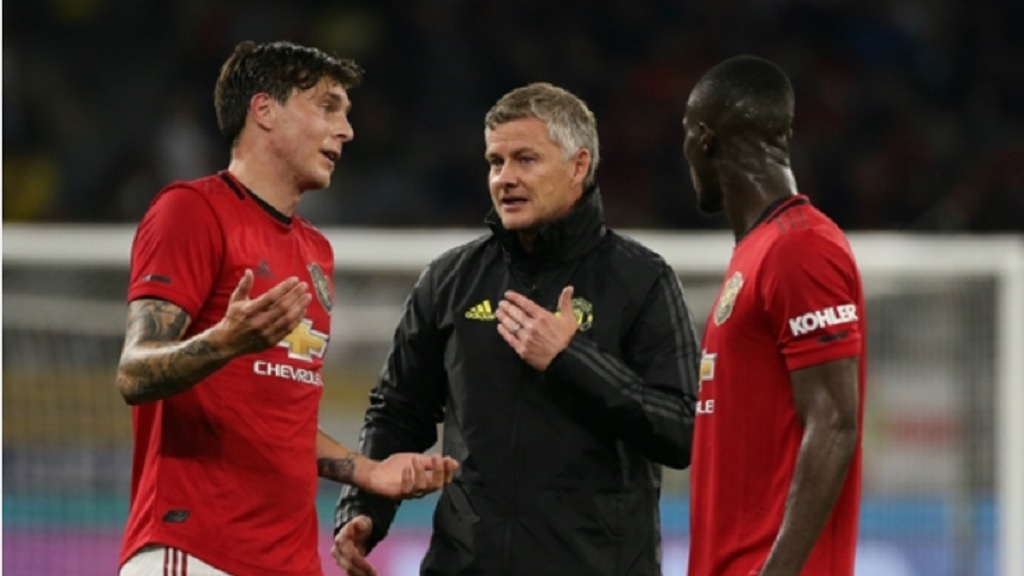 Manchester United and Chelsea began last season with Jose Mourinho and Maurizio Sarri as their touchline leaders, but the Premier League giants have traded a weight of experience for conspicuously risky appointments.

It means that Sunday's Premier League match between the teams will see two of the most powerful clubs in England led from pitchside by Ole Gunnar Solskjaer and Frank Lampard.

Both have enormous goodwill behind them after stellar playing careers with their respective sides, but they must achieve results as managers this term to maintain such bonhomie.

The opening-weekend meeting of the teams at Old Trafford will provide an early indication of how both are shaping up after challenging close seasons.

Here is a look at how United and Chelsea have reached this point, and in what direction they might be headed.

United turned to their former striker Solskjaer last December after Mourinho's reign ended in deep disappointment. The team stagnated under a manager whose erstwhile dynamism deserted him in the north-west and Solskjaer was considered a canny interim replacement. His arrival lifted the club from the doldrums, results perked up and a remarkable Champions League comeback to knock out Paris Saint-Germain was followed by a clamour to give the Norwegian the job permanently.

United were swept along by the feelgood factor and acceded to those calls, only for results to tail off as performances dipped alarmingly. If United were not back at square one, they were not far off.

Solskjaer has been backed this summer to bring in Harry Maguire, Aaron Wan-Bissaka and Daniel James, so the team should have a certain freshness, but many underachievers remain. The club - and executive vice-chairman Ed Woodward - need this appointment to work, but the bedding-in period is over and for Solskjaer's United must step up a level.

Lampard is a similar yet delicately different story. Chelsea's record goalscorer left the club five years ago and broadened his education with playing spells at Manchester City and New York City, before spending a year as Derby County manager, guiding the Rams to the Championship play-off final. He came in just five weeks ago to replace Sarri, who left for Juventus, and unlike Solskjaer has been unable to dip into the transfer market, owing to Chelsea's FIFA-imposed ban on doing deals.

The former England midfielder has a strong relationship with the club, from the stands to the boardroom, and can rely on a generous response if Chelsea take a while to find their stride under his leadership. Managers during the Roman Abramovich era have rarely lasted longer than two seasons but there are high hopes for Lampard, and a certain expectation he will be given time.

Some United supporters feel there is a dangerous level of dead wood in the squad, but those players who faced criticism last season have a chance to show they deserved to remain. The club has retained David de Gea along with fellow star turn Marcus Rashford and the often infuriating yet plainly gifted Paul Pogba. Maguire, Wan-Bissaka and James look strong signings, but it would be a surprise to see United finish in the top four, especially having lost the firepower of Romelu Lukaku.

Far from being left threadbare by the transfer ban, Chelsea remain jammed with quality, so much so that Lampard allowed his squad to be pruned on deadline day. They signed up Christian Pulisic before being punished by FIFA, with his arrival offsetting at least partly the blow of losing Eden Hazard to Real Madrid.

The likes of Mason Mount, Tammy Abraham and Fikayo Tomori could enjoy breakthrough seasons, with Callum Hudson-Odoi and Ruben Loftus-Cheek set to be prominent once they return to fitness. But the established brigade, including Jorginho, Olivier Giroud, N'Golo Kante, Ross Barkley and Willian, will also be heavily involved.

There is a reasonable perception these teams will be jostling for Europa League places come next spring. Manchester City and Liverpool are streets ahead, with Tottenham and Arsenal seemingly also better equipped for the coming nine months. It makes a strong start imperative if United or Chelsea harbour serious ambitions of making a top-four breakthrough. Sustaining any early momentum will be key, and United may need to invest again in January to stay in the hunt for success.

If these clubs are sensible, both will consider this moment a turning point and plan accordingly. With a reasoned, long-term strategy, either could be back on top of English football inside the next five years and stay there for even longer.

Yet both institutions find themselves in a pickle and both see going back to what they know as a means to move forward. If Solskjaer and Lampard succeed as the figureheads, they will need unequivocal support and unwavering patience. A major gear change from clubs that have been too easily distracted by the sweet temptation of short-term success, in other words.

Solskjaer convinced he can turn Manchester United's slump around

Mourinho tells Lampard to play Zouma and Abraham at Chelsea