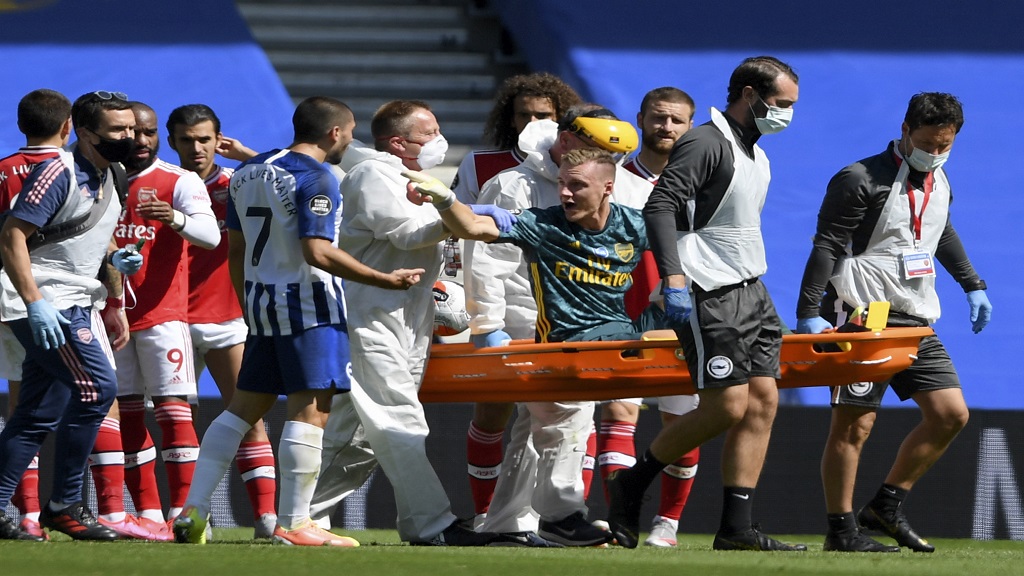 Arsenal's goalkeeper Bernd Leno gestures at Brighton's Neal Maupay as he leaves the pitch on a stretcher after getting injured during their English Premier League football match at the AMEX Stadium in Brighton, England, Saturday, June 20, 2020. (Mike Hewitt/Pool via AP).

Brighton striker Neal Maupay landed a double blow on Arsenal in the English Premier League, playing a role in a serious-looking injury to goalkeeper Bernd Leno in the first half and then scoring a stoppage-time winner with one of the last kicks of a 2-1 win on Saturday.

Maupay celebrated loudly after the final whistle and was pushed to the ground by Arsenal midfielder Matteo Guendouzi before being harangued by other players from the visitors.

Arsenal were angry because Maupay had leaned into Leno as the goalkeeper jumped to collect the ball. Leno landed awkwardly on his right leg and collapsed to the ground, his howls of pain clearly audible in the empty Amex Stadium.

As Leno was being carried off in the 40th minute, he sat up on the stretcher and pointed angrily at Maupay, who protested his innocence.

Maupay added to Arsenal’s sense of injustice by grabbing the winning goal in the fifth minute of added-on time when he latched on a pass and shot left-footed inside the near post of Leno’s replacement, Emiliano Martinez.

Earlier, Nicolas Pepe had given Arsenal the lead with a curling left-footed shot in the 68th, but defender Lewis Dunk equalised for relegation-threatened Brighton when he stretched out his right leg to block Rob Holding’s clearance off his own goal line and diverted the ball over the line.

This loss came less than three days after a 3-0 defeat at Manchester City on the opening night of the league’s resumption after the coronavirus outbreak. It leaves Arsenal six points behind fifth-place Manchester United, which occupy the final Champions League qualifying berth because second-place Manchester City were handed a two-year European ban that is currently under appeal.

VIDEO: Mourinho felt he had 'no bench' as Spurs draw with Man Utd