In Mexico Beach after Michael, some coming home find no home 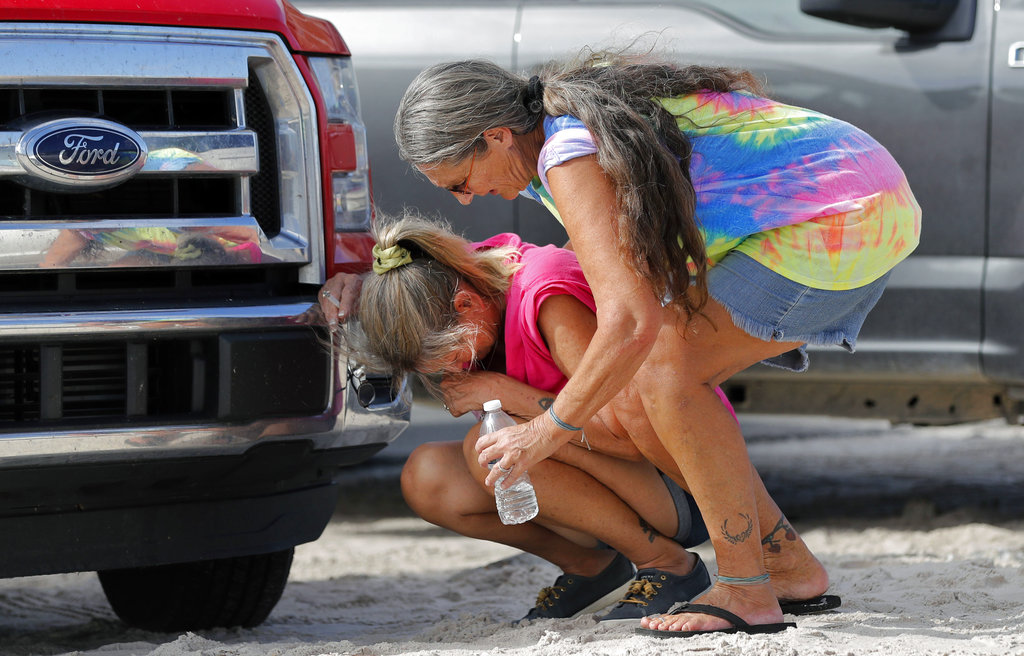 Nancy Register weeps as she is comforted by Roxie Cline, right, after she lost her home and all the contents inside to Hurricane Michael in Mexico Beach, Fla., Wednesday, Oct. 17, 2018. (AP Photo/Gerald Herbert)

With stunned faces and tears, residents of hard-hit Mexico Beach returned home for the first time Wednesday about a week after Hurricane Michael hit to find pieces of their lives scattered across the sand and a community altered.

Nancy Register sobbed uncontrollably after finding no trace of the large camper where she'd lived with her husband. She was particularly distraught over the loss of an old, black-and-white photo of her mother, who died of cancer.

Husband Taylor Register said he found nothing but a stool that he uses for cutting his hair, a hose and a keepsake rock that was given to him by a friend 40 years ago.

"That's my belongings," he said, pointing to a small pile beside his red pickup truck. Choking up, he said: "I appreciate God humbling me. Everybody needs it." 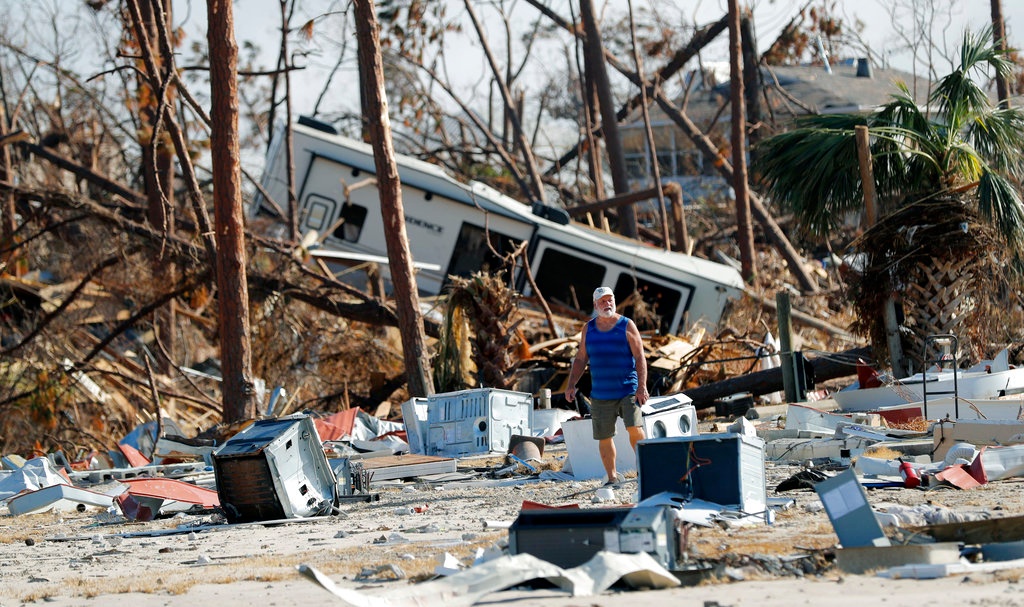 Just up the road, tears ran down Lanie Eden's face as she and husband Ron Eden sifted through sand in search of items they left before evacuating from the small beach house they've rented each October for years. They didn't find much - just a large pack of toilet paper that somehow stayed dry and a son's camp chair.

The Edens, who are from Fort Knox, Kentucky, and are temporarily staying in Alabama, were stunned to see mountains of debris and countless destroyed buildings as they drove into town for the first time. In a state of condominium towers, Mexico Beach was one of the few remaining places with small houses and a 1950s feel.

Residents among the community of about 1,200 people who rode out the storm at home have been in Mexico Beach since Michael hit. But officials used the city's Facebook page to tell others to stay away for a week after the Category 4 storm ravaged the beach town with 155 mph (250 kph) winds and a strong storm surge.

State emergency management officials said some 124,500 customers across the Panhandle were still without power Wednesday morning and 1,157 remained in shelters.

In Bay County, home to Mexico Beach and Panama City, more than half of the households and businesses remained without electricity. Inland, in Calhoun County, 98 percent of the customers didn't have power Wednesday morning, according to the emergency management website. And in Jackson County, which borders Alabama and Georgia, about 83 percent were without power.

In the meantime, in many areas devastated by the hurricane, law enforcement officials are battling looting of homes and businesses.

Bay County Sheriff's Maj. Jimmy Stanford said deputies have arrested about 10 looters each night since the storm hit. In some parts of the county, residents have spray-painted signs warning that "looters will be shot."

Panama City resident Wes Allen said looters have been a constant problem at the badly damaged motel where he is staying with his wife and three children. Residents have formed a nighttime patrol to keep an eye out for thieves.

"We've got looters breaking in and stealing whatever they can," he said. Allen said he hasn't reported the thefts to police because authorities seem so busy with other things.

Often the looters have been armed, Stanford said.

"Most of our officers lost their homes, have been working 16- to 18-hour shifts with no sleep, no shower, and now they're encountering armed individuals," he said. "It's a stressful time for everyone in Bay County."

The storm killed at least 16 people in Florida, most of them in the coastal county that took a direct hit from the storm, state emergency authorities announced Tuesday. That's in addition to at least 10 deaths in Georgia, North Carolina and Virginia.

The state's tally did not provide details of how the victims' deaths were storm-related, and The Associated Press was not immediately able to confirm those details for all of them. The AP's tally of deaths, in which authorities have confirmed details of how people died, stood at eight in Florida, and 18 overall including other states.

In Mexico Beach, what had been a town of about 1,200, residents don't expect power or anything else anytime soon.

Carlton Hundley, 25, returned to the house he rented with his girlfriend Connie Huff to find nothing but a long pile of shattered wood. What few possessions they found, including one of his shoes, were scattered across the ground.

"I knew it was bad, I'd already seen the pictures. But it's a lot more than I thought," he said.

Roxie Cline, 65, was overcome with emotion as she tried to describe the destruction in Mexico Beach, where she and her husband had lived for three years.

"I can't, I can't," she said, tearing up. "It's devastating. You lose everything. Everybody has."