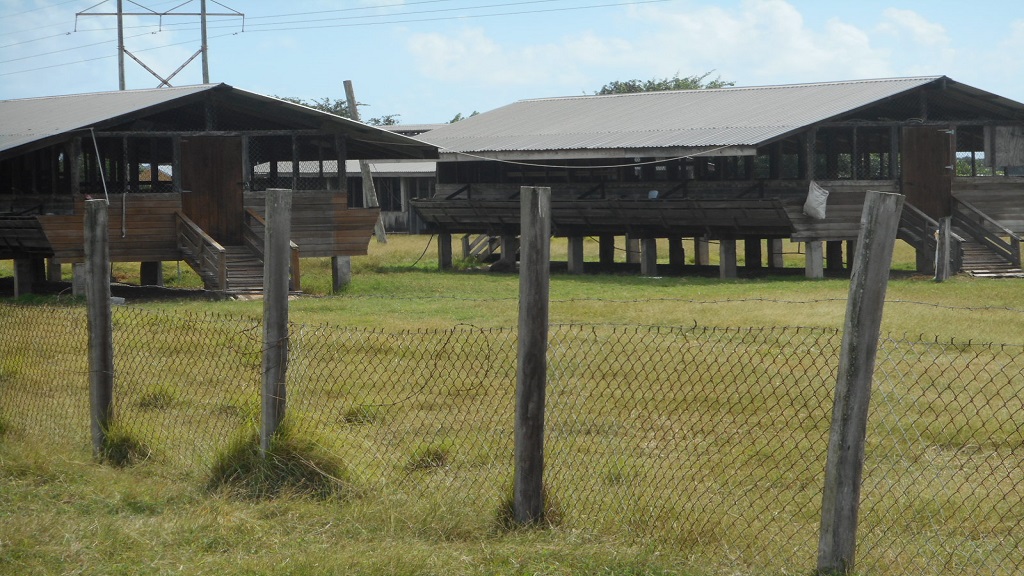 The pen where the goats were kept.

The Ministry of Agriculture, which has a unit responsible for policing the problem of praedial larceny, is the latest victim of cattle theft.

During the wee hours of Sunday morning, two hybrid goats, which were imported from America, were stolen from the Beausejour Agriculture Complex, located in Vieux-Fort.

According to a source, the goats, which cost thousands of dollars, were stolen under mysterious circumstances as it happened on the day when two of the complex’s guards were on duty.

When Loop News visited the complex yesterday, two of its guards were quarreling over the incident.

Investigations by this reporter have revealed that at the time of the incident, one of the guards was inside the building in which several offices are located, while the other was outside. It was revealed that the guard who was outside the building saw a light flashing on top of one of the pens where a number of goats are kept and heard the goats bleating, but never checked to see what was happening.

When Loop News contacted the head of the Praedial Larceny Unit of the Ministry of Agriculture, Pancras Albert, yesterday for comments on the matter, he said he was not aware of the incident. However, Albert who recently declared war on cattle thieves said that he will look into the matter.

At a meeting with staff of the agriculture complex yesterday, officials of the Ministry of Agriculture told them that the incident is bad for the department and expressed the need for cameras to be placed at the complex.

Over the years, a number of goats have been stolen from the complex, and most of the time the incidents occur while the building is being under guard by its unarmed security guards.

Last July, six goats were stolen from the complex, also under mysterious circumstances.

Apart from cattle, items such as weed eaters and wheelbarrows have been stolen from the complex over the years.

No one has been arrested and charged in connection with the recent incident or any of those in the past.